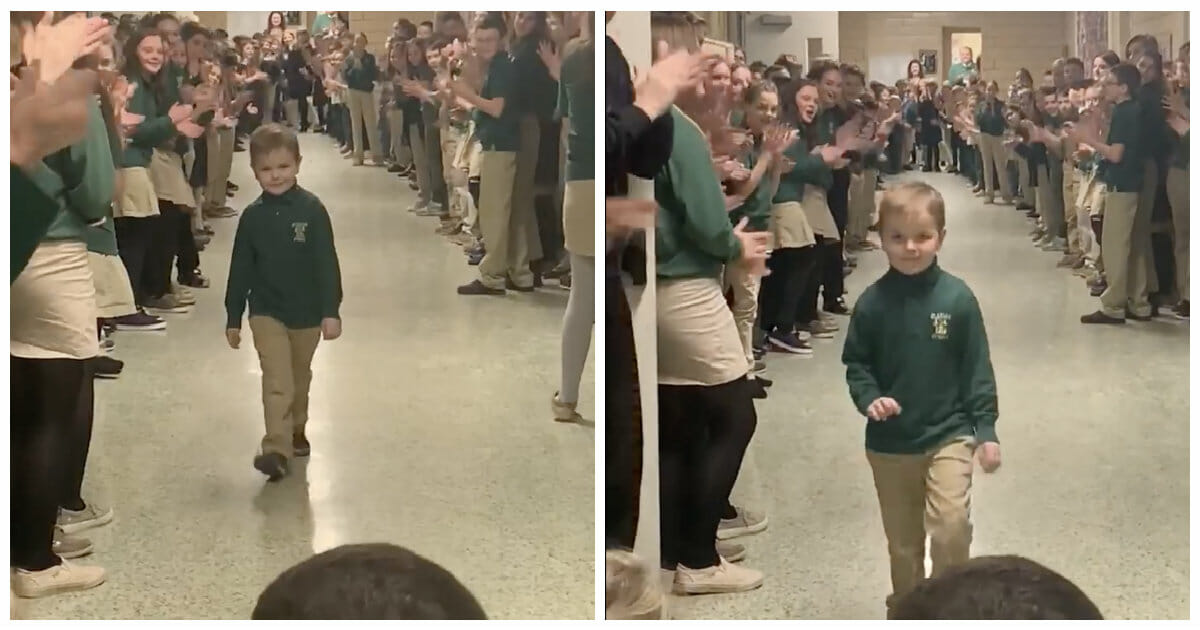 There’s nothing more difficult than watching a loved one battle cancer, especially when they’re a child. But there’s also no better feeling than seeing them beat the odds and get better.

Completing chemotherapy treatments is a milestone worth celebrating, and when one brave little fighter finished his long ordeal, his whole school stood up to celebrate.

John Oliver Zippay, a 6-year-old boy from Newbury, Ohio, has spent half his young life fighting cancer. He was diagnosed with acute lymphoblastic leukemia in November 2016 when he was only three.

After 18 days in the hospital, he spent the next three years undergoing chemotherapy treatments, according to FOX 8.

Chemo isn’t easy for anyone, but it can be especially hard on young kids who want to be running around enjoying childhood. Because of an implanted port, John had to take things easy.

“He wasn’t able to do any physical activity for three years,” his parents told FOX 8. “So it was hard for him, had to sit back for gym class and things.”

Luckily, that long difficult battle is now over.

At the end of December, John underwent his last IV chemo treatment.

John and his family were thrilled, and they all celebrated the momentous achievement.

But the most heartwarming celebration came at John’s school, St. Helen Catholic School. When John returned after beating chemo, his classmates all greeted him with a standing ovation and wild applause:

“Him having to miss some of the time was tough, but the class was just so happy to see him come back,” said school principal Patrick Gannon, adding that the John never fell behind on his schoolwork.

This heartwarming celebration is the beginning of a new life for John, who can start making up for lost time enjoying his childhood.

“You want that for your child, to grow up and get dirty and play outside and have fun and we kept him in a bubble so we’re excited,” his mother Megan Zippay told FOX 8.

“Looking forward to the future and having our little boy back.”

Congrats to this little boy for finishing chemo! We hope he has a great and adventurous childhood to look forward to!