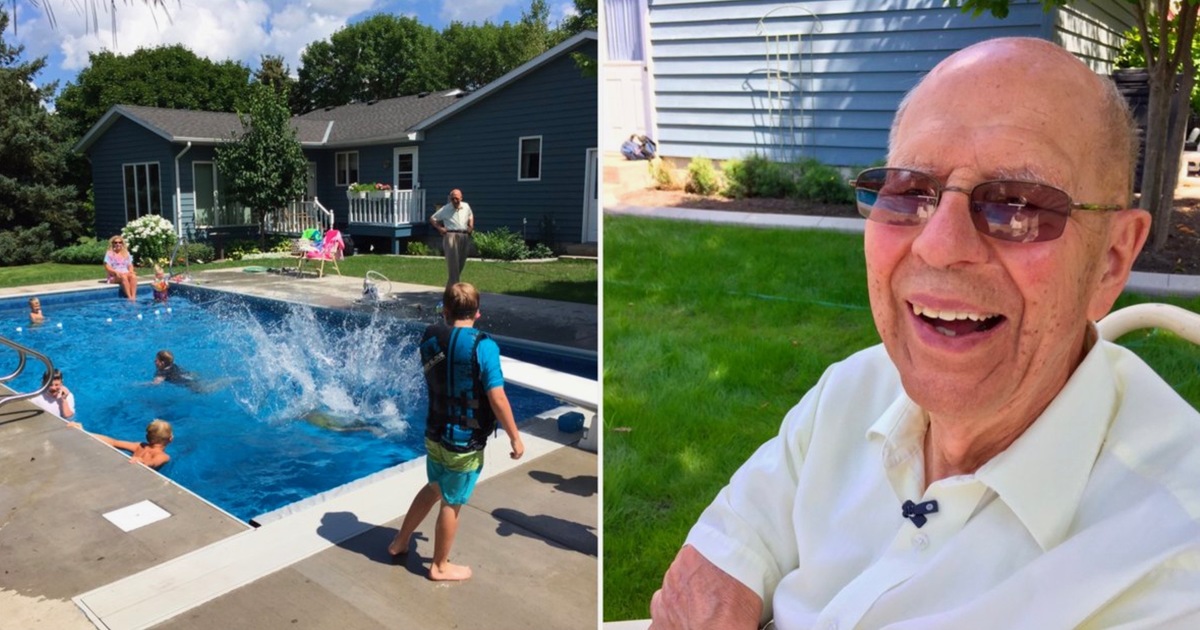 Like two trees growing together as they reach toward the sky, long-married couples support each other year after year. But when one partner dies, the other is left all alone with no one to comfort them.

Last year, 94-year-old Keith Davison lost his wife to cancer. He had been married to her for 66 years, and now Keith, a retired judge, was on his own for the first time in a very long time.

The loss hit Keith hard and the loneliness took its toll as he was cooped up in his Minnesota home day after day.

But Keith refused to let the loneliness take over his life — and late this spring, he got an idea to fight it.

He decided to build a pool for the neighborhood kids.

Keith’s town, Morris, doesn’t have a public pool, and he could use a little company, so it would be a win-win.

And what happened after the pool was installed proves that if you want to help yourself, sometimes the best way to do it is to do something nice for others.

This spring, 94-year-old Keith Davison hired a construction company to install a pool in his backyard, and in July when the the work was finished, Keith invited his whole neighborhood to come over for a swim.

To Keith’s dellight, his neighbors took him up on it.

Now, Keith’s pool is the best thing that’s happened to his neighborhood in a long time.

The local kids finally have a place to swim, and Keith doesn’t have time to be lonely anymore.

“I’m not sitting by myself looking at the walls. What else would you think of doing here you could have a whole bunch of kids over every afternoon?” he asks.

The effect on the neighborhood has been tremendous.

One neighbor told KARE 11 about Keith. “It’s him spreading joy throughout our neighborhood for these kids.”

Another local mom promised, “Now, we’re going to be here every day!”

And as for Keith, he’s as happy as can be. He’s been smiling much more than he has for a long time.

Watch this video to see how Keith’s kind act brought joy to everyone in his neighrhood, including him:

Isn’t it wonderful to see Keith so happy? Who knew that his plan would bring such joy?

Please share to pay tribute to this wonderful man! More people should be like Keith and realize that the best way to help yourself is to be kind to others!