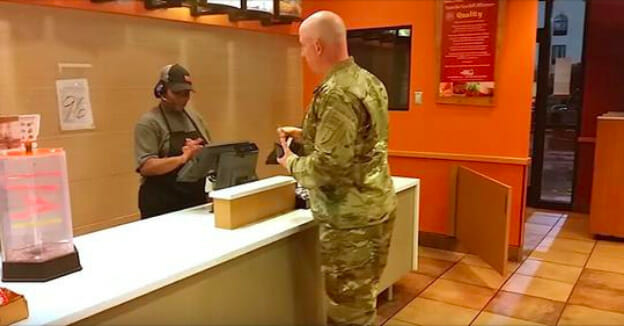 Many of us view our military with utmost admiration and respect — and why not? Their mandate to protect and defend our national interests means they volunteer to risk their lives for their country. Members of our military may indeed just be the most patriotic among us.

But despite how brave and patriotic they are, members of the military often keep humility and compassion at the core of their very being.

Army Lt. Col. Robert Risdon seems to be a great example of what humility and compassion are truly all about — and no, it doesn’t necessarily involve going to war in a foreign country.

It happened at a local Taco Bell shop.

One day, he visited a local Taco Bell to grab a bite to eat. He placed his order, got his food, and sat down to eat. That’s when he was approached by two young boys.

The boys, aged 9 and 13, wanted to know if he wanted like to buy some homemade desserts they were selling to raise funds for their local church.

But Lt. Col. Risdon noticed the boys looked rather vulnerable. They were cold and wet and he quickly suspected that they came from a poor background.

So Lt. Col. Risdon decided to follow his instinct. He asked the boys if they’d had dinner yet and if they were hungry. The boys were in fact starving.

That’s when Lt. Col. Risdon did perhaps the most basic thing one human can do for another — he invited them for a bite to eat. They could choose anything on the menu their heart desired.

Meanwhile, another diner at the restaurant, Jason Gibson, witnessed the events and caught it all on camera.

Jason was touched by what he saw and later decided to share the video he captured on Facebook — where he asked everyone to pass it on to cheer on this most wonderful army soldier — but also just a great human being.

The video quickly spread online and caught the attention of media across the country.

Lt. Ridson later commented that he is humbled by the attention, but that he believes that there are loads of people who do compassionate and wonderful things for others every day.

“I’m kinda embarrassed and humbled by the praise and don’t need it,” Army Lt. Col. Risdon told The Huffington Post. “I am a believer that we live in the best country in the world with the best people and that acts of kindness happen every day.”

Watch the touching video below — I think this soldier’s humility really comes shining through!

What a wonderful man who simply reacted to his instinct to do something kind. Share if you agree Lt. Col. Risdon truly represents all that is good in our nation!