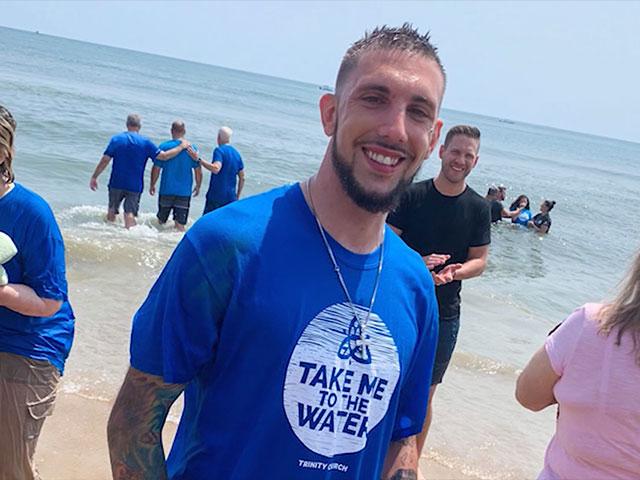 A suicidal person may not always ask for help and signs can go unnoticed for a long time.

But if you want to show that you care, you can always extend a helping hand.

Back in April, 27-year-old Jacob Palmer was getting ready to jump from a bridge in Virginia Beach, VA.

After a life filled with drugs and addiction he decided he was going to end his life.

But suddenly a good Samaritan intervened.

On April 25 around midnight, Collin Dozier was driving over the Lesner Bridge in Virginia Beach when he saw a man leaning over the edge of the bridge.

He felt that he couldn’t drive pass the scene, so Dozier decided to hit the brakes.

He circled back and spoke with the desperate man.

“That’s the only explanation I can even explain. God called me to go to the bridge.”

The young man, Jacob Palmer, was high on meth, PCP, heroin, and cocaine that night.

After a short conversation, Dozier managed to convince Palmer not to jump from the bridge.

Later, the police arrived to the scene. Then things took a turn.

Palmer became aggressive towards Dozier and the police.

“He said, ‘Leave me alone right now. There’s going to be two murders tonight. I have a gun. I’m telling you both if you don’t leave me alone,” Dozier explained.

No one really knew what was going to happen, so Dozier decided to act quickly. Dozier used his years of wrestling to take Palmer down.

“Being a wrestler and wrestling my whole life, I knew if I got him around him he’s not getting out.”

The police arrested Palmer and brought him to the station.

The story could have ended there, but it was far from over.

“I really believe that the good Lord puts his hands on our shoulders at times to do great things like this,” said Virginia Beach Mayor Bobby Dyer.

“This is an individual who put his own life at risk to save another. And you know, that’s a godly thing.”

CBN News has an update to a miraculous story we reported a few weeks ago.

What is also very gratifying is that Dozier and Palmer still keep in contact. Dozier is now Palmer’s mentor.

He attends Dozier’s church and has been sober and drug free since that night on the bridge.

Last weekend, Jacob Palmer was baptized at the Virginia Beach oceanfront. Dozier was there and took part in the ceremony.

Sometimes we meet a person that changes our whole life and I’m happy that Collin was there in Jacob’s darkest moment.