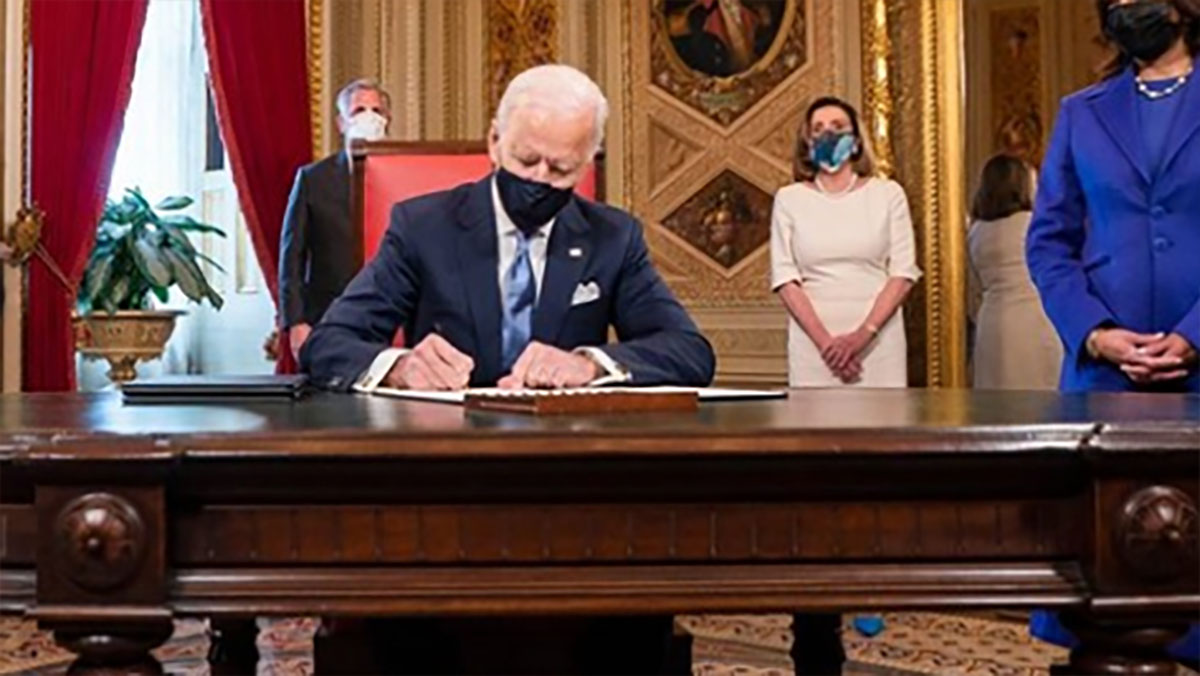 Just hours after being sworn in Joe Biden set about reversing Trump’s most controversial policies.

Joseph R. Biden, Jr., was sworn in as the 46th president of the United States on Wednesday, and made an impassioned speech calling for unity in a “bitterly divided country,” before signing 17 executive orders.

His initial acts sought to boost the federal response to the coronavirus crisis, which has claimed the lives of more than 400,000 Americans, including asking congress to extend aid and the launch of a “100 Days Masking Challenge” to encourage Americans to wear masks.

Other orders include a move toward reversing the “Muslim travel ban,” rejoining the World Health Organization and the Paris Climate Agreement, stopping construction of the border wall, and ending the Keystone XL pipeline.

The number of orders that Biden signed was much higher compared to previous presidents. According to Quartz Trump, Obama, Bush, and Clinton signed four executive orders or memos on their first day – combined.

Biden clearly has his work cut out with plans to sign another 10 orders on his second day in office.

President Biden “will take action – not just to reverse the gravest damages of the Trump administration – but also to start moving our country forward,” a statement detailing his executive orders said, as per BBC News.

Federal agencies will be ordered to prioritize racial equality and review any policies seen to reinforce systemic racism.

“I think some of the things we’re going to be doing are going to be bold and vital, and there’s no time to start like today,” Biden told reporters, as per CBS News.

A move to reassure the press that the current administration respects them after years of Trump declaring ‘fake news’ was made with an announcement from incoming White House press secretary Jen Psaki.

“I have deep respect for the role of a free an independent press in our democracy and for the role all of you play,” she told reporters.

An executive order was also signed revoking Trump’s “harsh and extreme immigration enforcement” and directing agencies to set immigration policies more “in line” with the Biden administration’s “values and priorities.”

Biden also issued an executive order to dissolve the 1776 commission, a panel backed by President Donald Trump set to promote “patriotic education” as oppose to schools applying a more accurate history curriculum around slavery in the U.S.

The commission had been in apparent opposition to The New York Times’ 1619 Project, a Pulitzer Prize-winning project aimed at teaching American students about slavery that Trump, speaking last fall, had called “toxic propaganda,” according to CNN.

Trump did not attend Biden’s inauguration so the handing over of the so called ‘nuclear football’ didn’t go ahead.

The contents of the briefcase, which is an oddly shaped 45-pound satchel, are to be used by the President to authorize a nuclear attack while away from fixed command centers, such as the White House Situation Room.

I think we can all agree that a new day has dawned and I look forward to all the positives that are set to be announced over the coming weeks. There is much to be done to unite this country for the better.