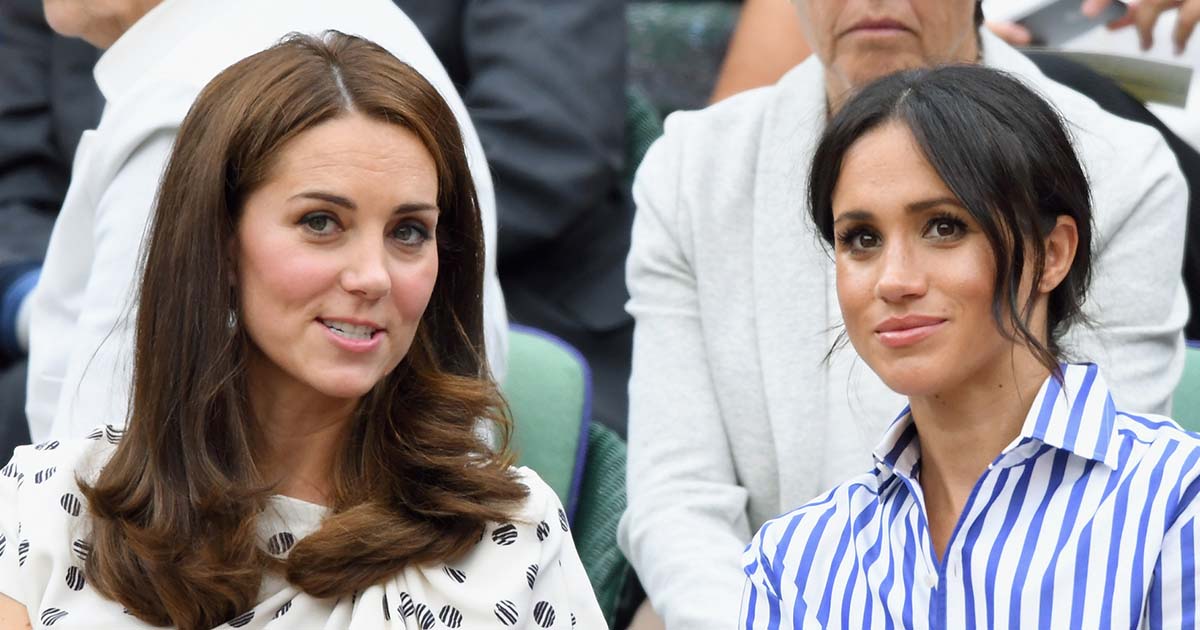 With the release of Prince Harry’s memoire Spare, several members of the Royal Family – as well as a former butler – got their fair criticism.

Harry pulled no punches in detailing new revelations about how his life was within the royal sphere. Moreover, the prince also shed light on Meghan Markle’s relationship with Kate Middleton, and how at one point the two women shared a deal of animosity.

It’s previously been reported that Meghan had made Kate cry on her wedding day over the dresses for the flower girls. Later, though, Meghan contradicted those claims, suggesting that it was Kate who had actually had made her cry.

Suffice it to say that Meghan and Kate were never best friends. In Spare, Harry’s now revealed another time when Kate lashed out at Meghan.

Apparently, when young Princess Charlotte, who was to be a flower girl at Meghan’s wedding, tried on her dress without a fitting, she was left in tears. A furious Kate is said to have contacted Meghan – ending with Harry finding his then-soon-to-be-wife “sobbing on the floor.”

Meghan and Kate didn’t become best friends from the off, but neither were they enemies in the beginning. Indeed, people held hopes that the two would eventually find their rhythm and click, yet there always seemed something that wasn’t quite right between the two.

For her part, Meghan has not been too outspoken regarding her and Kate’s relationship. Of course, on those occasions where she has divulged information, things have been fairly explosive.

In Harry and Meghan’s Netflix documentary, which aired in December, Meghan revealed that her first ever meeting with Kate could’ve ended better.

“When Will and Kate came over, and I met her for the first time, they came over for dinner, I remember I was in ripped jeans, and I was barefoot,” Meghan recalled.

“I was a hugger. I’ve always been a hugger, I didn’t realize that that is really jarring for a lot of Brits.”

She continued: “I guess I started to understand very quickly that the formality on the outside carried through on the inside. There is a forward-facing way of being, and then you close the door and go ‘You can relax now’, but that formality carries over on both sides. And that was surprising to me.”

Following their royal marriage, Harry and Meghan lived at Kensington Palace for a short while. The residence was Prince William and Kate Middleton’s home at the time (Harry and Meghan moved into their own place soon after).

It was supposed to be a happy period for the couples, though things turned ugly quickly.

Harry and Meghan moved to Nottingham Cottage, not far from William and Kate. It was then that the relationship between the two couples soured. According to Tom Quinn, this happened for several reasons.

Meghan reportedly had difficulty reconciling with the fact that Kensington Palace was reserved solely for William and Kate. At the same time, a senior royal aide told her she’d never be “in the first division.”

“It was being pointed out to them in no uncertain terms that they weren’t in the first division because that place is held by William and Kate. Inevitably that led to friction,” Quinn claimed.

Harry and Meghan’s royal duties officially ended on March 31, 2020. By then, the Sussexes’ had welcomed their firstborn child, Archie. The family of three would later become four with the arrival of their daughter, Lilibet.

Royal expert Neil Sean once claimed that Kate offered to take the first newborn pictures of Archie. However, Meghan is said to have turned down her approach, instead wanting to “hire a photographer” for the job.

“This was a very special gesture from the now-Princess of Wales to Meghan Markle when she had her first child, Archie,” Sean said in a Youtube video, as reported by Express. He added that Kate offered to “take the personal picture of baby Archie” after other professional photographers had “commended” her portfolio.

These days, Meghan’s relationship with several members of the Royal Family is strained. As stated, Kate Middleton was one individual in particular whom the former actress had a hard time with from the beginning – and vice-versa.

Authors Omid Scobie and Carolyn Durand claim in their book Finding Freedom that the two women weren’t exactly feuding from the off, but rather, the two royals simply didn’t know each other well enough.

“Meghan would agree with the assessment that the duchesses were not the best of friends,” they wrote. “Their relationship hadn’t progressed much since [Markle] was Harry’s girlfriend.”

Moreover, Durand and Scobie add that Kate didn’t make a significant effort to welcome Markle into the family, at least not in the way people might have expected.

Meghan had hoped that Kate would take her under her wing and guide her through all the new things that someone coming from “outside to the Firm” should know about. But that, the authors claim, never happened.

“Meghan was disappointed that she and Kate hadn’t bonded over the position they shared, but she wasn’t losing sleep over it,” Durand and Scobie wrote in Finding Freedom, adding that “Meghan would far rather have had Kate check in on her during the most difficult times with the press.”

Then, in the build up to Harry and Meghan’s wedding, things heated up.

Kate made her cry on wedding day, Meghan claimed

In her and Harry’s interview with Oprah, Meghan claimed that Kate Middleton had made her cry over the flower-girl dresses on her wedding day – directly contradicting earlier claims made by the tabloids.

“It really hurt my feelings. It was a really hard week of the wedding. And she was upset about something, but she owned it, and she apologized. And she brought me flowers and a note, apologizing,” Meghan said.

“I think so much of what I have seen play out [in the media] is this idea of polarity, where if you love me, you don’t have to hate her. And if you love her, you don’t need to hate me,” she added.

By that stage, things were tense between Meghan and Kate. Last fall, both attended Queen Elizabeth’s funeral, seeing each other for the first time in a long while. Interestingly, reports at the time suggested that Kate and Meghan didn’t talk to each other at all.

In his book, Spare, Harry has revealed new details about what went down between Kate and Meghan in 2018, revealing a series of private texts dating back to the days leading up to he and Meghan tying the knot.

They centered around Kate’s daughter – Meghan’s niece – Princess Charlotte, who was to wear a specific gown as a flower girl at the St George’s Chapel on the Windsor grounds, where the wedding was held.

All the flower girls’ gowns were “french couture,” but none had been fitted before they were crafted. Therefore, Harry wrote that it was expected that some adjustments would be needed.

Of course, for Meghan, it was a highly stressful time. Not only did she have the wedding to think about, but she was also struggling with her father, Thomas Markle, who had leaked fake pictures of her to the paparazzi.

In his book, Harry wrote he found his then-bride-to-be “sobbing on the floor” following a text exchange with Kate. Harry wrote that Kate sent Meghan a text, reading: “Charlotte’s dress is too big, too long, too baggy. She cried when she tried it on at home.”

At first, Harry claimed that Kate didn’t want to meet Meghan’s tailor at Kensington Palace to have the dress fixed. Ultimately, changes had to be made to all the bridesmaids gowns, which had to be remade.

Moreover, Harry claimed that Kate had discussions with her “own wedding designer” about the dress problems.

“Meg asked if Kate was aware of what was going on right now. With her father,” Harry said. “Kate said she was well aware, but the dresses. And the wedding is in four days!”

Harry found his wife “sobbing” on the floor

“I’m not sure what else to say. If the dress doesn’t fit then, please take Charlotte to see Ajay. He’s been waiting all day,” Meghan texted Kate, according to Harry.

Harry added: “A short time later I arrived home and found Meg on the floor. Sobbing,” adding that he was “horrified” seeing his then-future-wife on the floor like that.

“It was intolerable but temporary. Kate hadn’t meant any harm, I told her,” Harry said.

Harry further claimed in Spare that Kate had “problems with the way Meg was planning her wedding. Something about a party for the page boys? It went back and forth.”

Thus far, the British royals have decided not to comment on anything to be found in the book.

Harry, meanwhile, has reason to be happy: Spare became a huge success after only its first day on sale.

As reported by Express, Spare is on its way to setting a new record as the fastest-selling non-fiction book ever, according to his publisher Penguin Random House. The book sold 400,000 copies across physical, e-book, and audio formats on the first day.

On the UK Amazon site, Harry’s memoir is already the top-selling publication and is expected to be the biggest seller of 2023.

Parts of the book were widely leaked prior to its release, but its contents have continued to fill airtime and newspaper and online pages.

Harry not as popular in Britain anymore, per survey

Although Harry’s book has been highly anticipated, not everyone is excited about what he has to say. The Express reported that the Prince’s interview with ITV on Sunday had around 4.1 million viewers. At the same time, the BBC aired the drama Happy Valley, which had about 5.3 million viewers.

The negative trend can also be applied to Harry regarding the public’s opinion of him. In a new YouGov survey published in The Times, only 24 percent of the UK population still have a favorable view of him. That number is down from 80 percent a decade ago, with 68 percent being critical.

According to the survey, Harry and Meghan’s popularity ratings among those over 65 were even worse than the ratings of Prince Andrew.