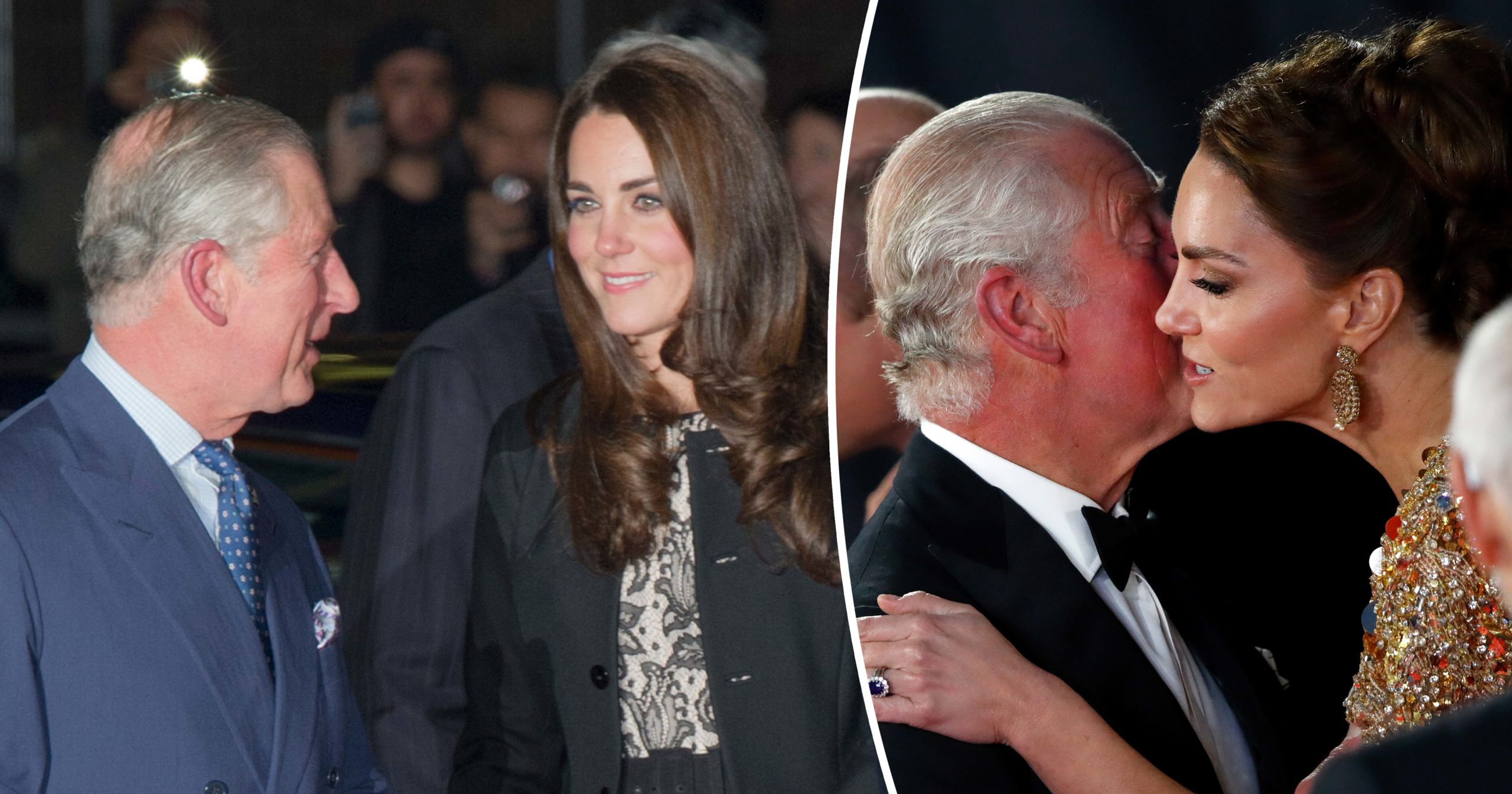 King Charles waited longer than anyone in history to claim the British throne, but after the passing of his mother last month, his time has finally come.

Becoming the monarch not only means honoring traditions and creating a legacy to mark his reign, but also changing or adapting things he thinks are necessary. The Queen’s passing also means a shuffle of sorts for the royal family, with several members taking on new responsibilities. That includes Charles and Camilla, of course, as well as Charles’s heir, Prince William, and his wife, Kate Middleton.

It’s not yet clear whether Charles and Camilla will even leave their home at Clarence House to move into Buckingham Palace, the official residence of the British monarch. Other things, however, are sure to change. If reports are to be believed, one individual that might see herself in a new role is Kate Middleton.

The future Queen apparently could be given an entirely new role under the reign of her father-in-law.

Kate Middleton has been part of the Royal Family for over a decade. In 2011, she and Prince William tied the knot in Westminster Abbey, and as the wife to a future king, as well as mother to another, it’s an understatement to say that her job is important.

In fact, Kate’s role within the Royal Family has become somewhat crucial, so it’s a good thing she’s upheld excellent relationships with the rest of the family. Not least with her father-in-law, King Charles, and Camilla.

Kate’s bond with the King and Camilla has grown strong over the years; and ever since they met for the first time, she’s been welcomed with open arms.

Now, with King Charles at the helm, it appears Kate would be set to take on an even more significant role within the monarchy.

When she first met William, Kate Middleton had not yet turned 20.

William and Kate both studied at the University of St. Andrews in Scotland. The couple was said to have met through friends, though Kate was initially timid.

“I actually went bright red when I met you and scuttled off feeling very shy about meeting you,” Kate recalled.

The two became good friends at first, before love eventually took over. William and Kate started dating, and in 2006, she made her first royal appearance as the Prince’s girlfriend.

Kate’s life changed overnight as she and William fell in love and later got engaged. Suddenly, she was being prepped for a life within the Royal Family, along with all the traditions and duties that come with it.

For some, it sure must be frightening to make that big of a change in one’s life, despite the idea of being a member of the Royal Family often being seen as somewhat luxurious. As in any other family, it’s vitally important to establish a good connection and relationship with the rest of the members, especially the parents-in-law.

When Kate was about to meet her father-in-law, King Charles, for the first time, she was understandably very nervous.

She needn’t have been. By all accounts, her first meeting with the then-Prince was hugely successful.

“I was quite nervous about meeting William’s father, but he was very welcoming and very friendly,” Kate said in 2010. “It couldn’t have gone easier for me, really.”

And it wasn’t only Kate who was nervous about her meeting her in-laws. It turns out William was too, though his first encounter with Kate’s mother and father was equally successful.

“Kate’s got a very close family, and I get on really well with them, and I’ve been lucky they’ve been so supportive,” William said of Kate’s parents, Carole and Michael Middleton, in their engagement video.

“Mike and Carole have been loving, caring, and really fun, really welcoming towards me. So I’ve felt really part of the family, and I hope Kate feels the same with my family,” he added.

After Kate met William, she visited the Queen’s estate in Scotland, Balmoral, several times. Besides getting to know the Queen, she also met Charles at the estate many times, laying the foundation for their close relationship and strong bond.

Charles and Kate shared a great love for nature and outdoor life. Before her and William’s wedding, Charles taught Kate how to stalk deer in Scotland.

Today, we know that everything has gone well regarding Kate’s integration. Kate and William are busy raising their three beautiful children, Prince George, Princess Charlotte, and Prince Louis, and recently moved into Adelaide Cottage on the Windsor Castle grounds.

King Charles, meanwhile, spends plenty of time with his grandchildren. By looking at pictures, it sure seems like the kids’ bond with their grandpa is strong.

Last year, when Prince William and Kate Middleton joined Charles and Camilla at the premiere of the James Bond film No Time To Die, the excellent relationship between the King and Princess was also witnessed by the public in a beautiful way.

Pictures of the two showed Charles greeting his daughter-in-law with a kiss on the cheek, and during the Queen’s Platinum Jubilee earlier this year, another wonderful moment was caught by photographers.

As Kate and William arrived at St. Paul’s Cathedral for the thanksgiving service marking the Platinum Jubilee, the couple greeted Charles and Camilla before taking their seats.

When they walked towards each other, Charles blew Kate a kiss, which was adored by royal fans.

“The daughter he always wanted”

“He always lights up when he sees her. The daughter he always wanted,” one wrote.

Another added: “Both Prince Charles and Camilla blew kisses for Kate. My heart melted.”

Over the years, William and Kate have undergone hundreds of royal engagements and performed many other duties they are obligated to follow.

As the future King and Queen (or Queen Consort), it’s always important to show your best side, be nice, and treat all people with equal respect.

But perhaps the new, more modern royals differ from the older generation. And that could be why King Charles, then-Prince, was said to be frustrated with William and Kate when they did something during their first royal tour together.

After tying the knot, William and Kate didn’t waste time in beginning with their royal duties. They went on a 10-day visit to the US and Canada, their first overseas visit as husband and wife and as a royal couple.

The newlyweds got a warm welcome everywhere they went. However, the reaction to William and Kate’s trip was not quite as positive back in England.

According to royal author Sally Bedell Smith, the couple adopted a very laid-back attitude during the trip and posed for a set of photos that left Charles “more than a little irked.”

In her book, Prince Charles: The Passions and Paradoxes of an Improbable Life, she wrote that Charles thought William and Kate’s trip to the US and Canada had too many “tasteless” photo opportunities.

Moreover, the now-King thought they were too much of a “camera-friendly couple,” treating the trip as a holiday rather than work.

So what did William and Kate do? Well, one particular photo showed the couple wearing cowboy hats. It was in honor of pressing the button which launched the Calgary Stampede, an annual rodeo festival held in Calgary, Alberta.

Now that King Charles sits the British throne following the Queen’s passing, it’s said that he might change some things within the monarchy.

Indeed, in many respects it looks as though he has a clear plan for approaching the job.

Previous reports stated that King Charles planned to change the law to prevent non-working royals from being Counselors of State.

Kate to become Counselors of State?

The 1937 Regency Act dictates that the spouse of a monarch and the four adults next in line to the throne can act as Counselors of State.

They can fill in for the King and carry out official functions such as holding Privy Council meetings and meeting new ambassadors. However, they do not have the authority to dissolve Parliament, grant rank titles, or deal with matters that involve the entire Commonwealth.

With the passing of the Queen, three of those are now non-working royals: Prince Andrew, Prince Harry, and Princess Beatrice. It appeared that Harry was one of those who would be removed from the role, but royal sources now tell The Mirror that Charles will spare Harry, Andrew. and Beatrice from the “embarrassment” by having them taken off the list.

“No one will be excluded. The pool of Counsellors of State will be expanded, this is for purely practical reasons,” a palace source told The Mirror.

“As the King and Queen Consort are likely to be away, as could the Prince and Princess of Wales, it is only right this is attended to.”

“The simplest way of solving the problem”

Moreover, a formal process will be necessary to make it happen, which would be completed before King Charles goes on his first overseas trip, planned for the beginning of next year.

Constitutional expert Dr. Craig Prescott at Bangor University says that adding Kate Middleton would be “unprecedented,” adding that the changes are “the simplest. way of dealing with the problem.”

“It makes perfect sense. It deals with the present problem in that there are not enough working royals to act as Counsellors of State. Adding [Kate Middleton] is unprecedented, but this also makes sense,” Prescott said.

“As two Counsellors of State need to act together, it follows that the Prince and Princess of Wales could act together. Overall, this is the simplest way of solving the problem, and the legislation should pass through Parliament without too much difficulty,” he added.