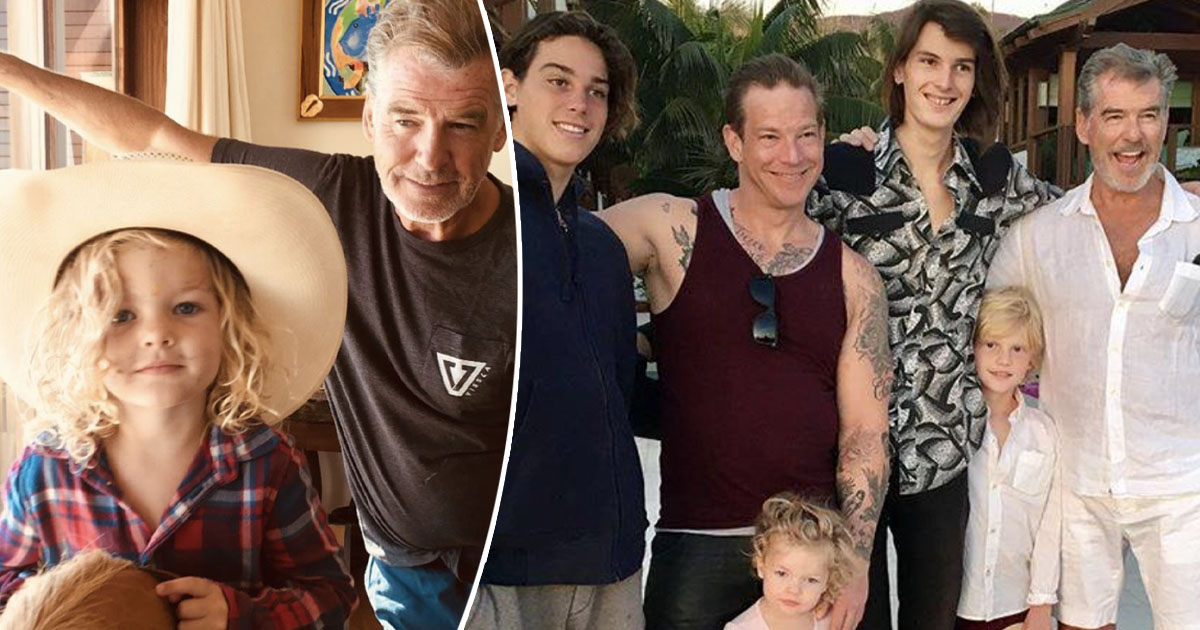 Most of us know Pierce Brosnan as James Bond; the suave international spy who romances his female leads in various exotic locations. And while Brosnan’s depiction of the British secret service agent remains iconic, in his real life he is very different…

In his personal life, Brosnan is a dedicated husband, father, and grandfather!

It is not surprising that Pierce Brosnan has held the title of “The Sexiest Man Alive,” he is loved by fans all across the globe. However, the actor has eyes one for one woman; his wife Keely Shaye Smith.

The couple met at a party in 1994 at a party in Cabo San Lucas. The two of them instantly hit it off. Brosnan recalls, “Wherever I went in the world, I missed her, and I’d send her tickets to come so we could be together. We just seemed to fit.”

After seven years together, the couple wed in the beautiful location of Ballintubber Abbey in County Mayo, Ireland. Their closest friends and family were present at the occasion.

They have two songs together, but share more children through Brosnan’s first marriage to Cassandra Harris. Harris had passed away in 1991 because of ovarian cancer.

Brosnan adopted two children Cassandra Harris had from her first marriage as well, Charlotte and Christopher.

In 2013, Charlotte passed away after fight a battle with Ovarian cancer. This rocked the family once again after earlier loss of Cassandra and Charlotte’s grandmother from cancer as well.

But the family held on to one another and made sure they supported each other through this tragic heartbreak.

Everyone who knows Brosnan and his wife say they seem like a pair of newly weds, they still try to sneak kisses to one another and are affectionate towards one another.

The couple is enarmored with each other and is not shy to express it in public. On their 25th anniversary, Brosnan posted a heartfelt message for his beloved on Instagram.

He credits his wife Keely for making him into a well rounded individual who is a loving family man.

As a child, Brosnan had an absent father which colored his early experiences as a child. He did not have a strong family system and hence struggled. Now that he has a family of his own, he has realized the importance of family and makes sure his family knows how much they mean to him.

He is very protective when it comes to his family. When his wife Keely Shaye Smith was getting comments about her weight from trolls on the internet, Brosnan quickly shut it down. When a page compared his wife’s new figure to her old one, Brosnan was quick to shut it down saying he loved his wife as she was, he says about her, “she is the most beautiful woman.”

The actor has three grandchildren, Isabella, Lucas, and Marley. He adores all three of them quite a lot and has said they “melt” his heart. In an interview on “Live With Kelly and Ryan” in April 2017, he talked about his incredible experience as a grandfather. He said, “It’s just such a joy to be a grandparent … there is just something intoxicating about it and beautiful. There is something very special about it.”

He prefers spending time with his family and friends. In order to spend time with family out of the public eye, Brosnan bought a home in Hawaii which he has kept a secret.

The actor has indulged himself with his art. He shared glimpses of his studio and his work with fans earlier this year which caused a bit of a frenzy because of how good the work was.

Their house is built on five acres of land and is located in a beautiful oceanfront strip in Kauai, Hawaii. They bought the home in 2002, and the family has been going back and forth between there and their other home, a mansion in Malibu, California.

The family spent most time in Hawaii during the pandemic and made sure to partake in activities which put them in close contact with nature.

The actor has been acting but in his personal life prefers to keep everything lowkey. We are sending the Brosnan family our very best.

Share this piece with other fans of Pierce Brosnan.