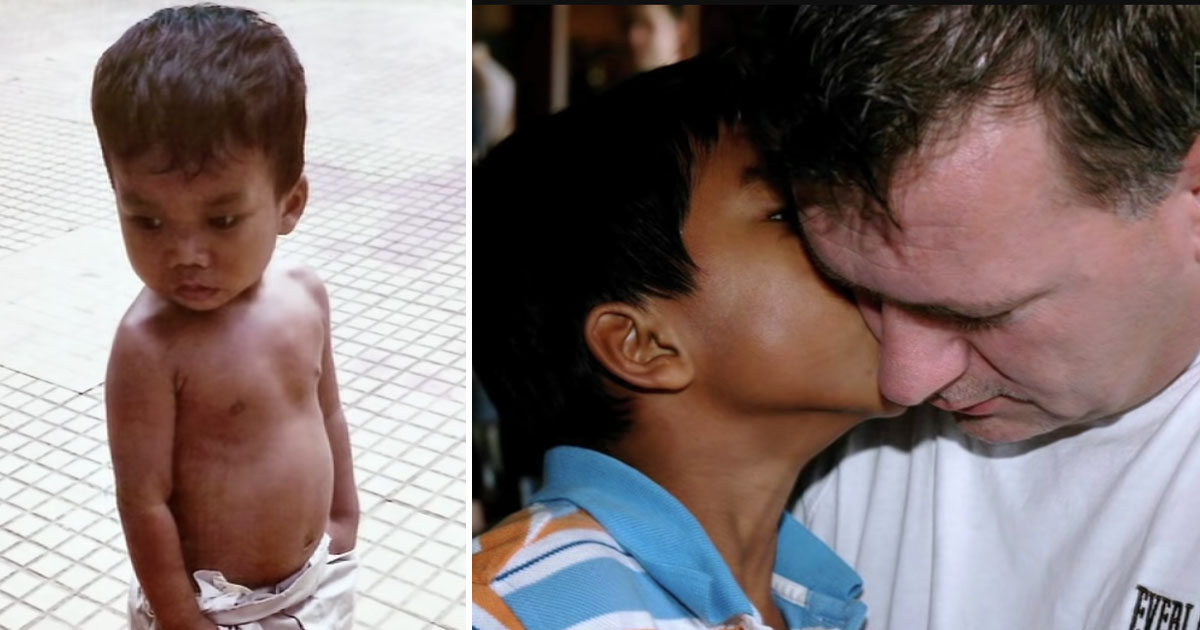 Families do not have to always be made, sometimes they can be found. This story proves that you do not have to be biologically related to someone in order to have a strong bond with them.

Jerry Windle was a gay man who was single in the nineties. He never thought he would become a dad. But one day he read a story in a magazine about a man who adopted a child from Cambodia which blossomed hope in his heart about his own chances at becoming a father.

He called the adoption service which was listed in the article, and asked them if he would qualify to adopt a child since he was a single man, the service told him yes.

Just a few months later, Jerry had a 1.5-year-old boy in his care. The little boy was from an orphanage in Phnom Penh, Cambodia. The baby was named Jordan and he suffered from scabies and intestinal parasites. He was malnourished and also suffering from several infections.

Jerry stood by his son’s side and nursed him back to health. His son would one day compete in the Tokyo Olympics, representing his country!

The baby was named Jordan Windle. He had been at the orphanage since he was one year old because his birth parents has passed away, leaving no one to care for him.

As he grew up, he became a promising athlete. He represented the United States on the U.S. Olympic Diving Team after he took second in the Olympic trials.

Jordan shared how his dad was always the loudest cheerleader at every swim meet and competitive event he participated in. Because of the restrictions made mandatory by Covid-19, his dad could not accompany him to Tokyo for the Olympics.

“I wish he was there, but that doesn’t really change what I’m going there to do: To have fun, show off a little bit, and put on a show for everyone. That’s going to be my intention and I’m hopefully going to make him proud,” Jordan said.

Jordan had been 7 years old when he impressed Tim O’Brien with his diving skills. O’Brien told his dad that Jordan had the skills of legendary diver, Greg Louganis. O’Brien revealed that his father had coached Louganis, so clearly he knew what he was talking about!

That is when Jordan started training for his athletic career. At age 9, he won the national junior national championship.

While he represented the United States and considers it his home, he has never forgotten Cambodia. He has the Cambodian flag tattooed on his body and carries the country in his heart.

Jerry had a watch party for the Olympics at his home. He said, “It’s disappointing but at the same time this is Jordan’s journey and this is the pinnacle of it, and I want him to enjoy this experience as best he can … That’s what I’ve always wanted for him.”

Jordan said he would be thinking of his dad during his dive.

“I tell everyone, when they ask me why I dive, I dive purely for my dad and how much he loves watching me,” the athlete said.

“Without him making all the sacrifices that he has, and his love and support the whole time we’ve been together, I really wouldn’t be where I am today. I have him to thank for everything, all my accomplishments. It’s been an amazing journey with him, and we’re still rolling,” he added.

What a beautiful story of a found family. We absolutely love heart-warming tales like these!

Share this piece with your friends and family to give them a daily dose of an inspiring tale.