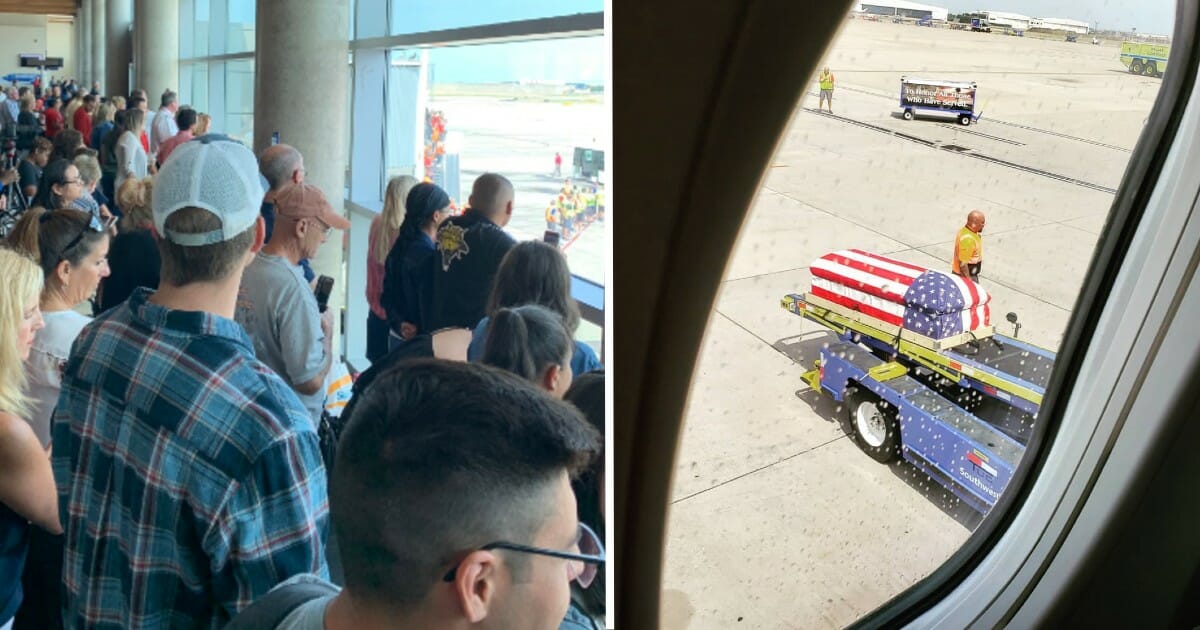 When Bryan Knight was five years old he waved goodbye to his father, US Air Force Maj. Roy A. Knight, Jr., at Dallas Love Field in Dallas, Texas. It was the last time Bryan saw his father.

On Thursday, Col. Knight–he was promoted to colonel around September 1974 when the Air Force declared him dead–returned home.

Bryan was the captain on the Southwest Airlines flight that flew his father back home to Dallas, where the two last saw each other.

On August 8, Dallas Love Field fell silent, something that doesn’t happen very often at an airport.

Jackson Proskow, the Washington Bureau Chief at Global News, was at the airport that day and witnessed the emotional moment when a gate agent made an announcement on the PA system.

His incoming plane was carrying the remains of an American soldier who was shot down during the Vietnam War.

Our incoming plane is carrying the remains of an American pilot shot down over Vietnam in 1967. His remains were only recently recovered and identified and brought back to the US.

Jackson wrote that as the gate agent informed those in the terminal about the soldier, he became emotional, as did many others.

People gathered near the windows to watch as the plane landed and then taxied under a water salute.

“It was kind of a quiet gasp in the lounge area,” Jackson told The New York Times. “Everybody was sort of standing almost at attention.”

As travelers lined the terminal’s windows, dozens of Southwest and airport employees watched in reverence as the plane pulled into the gate. There was barely a dry eye as Col. Knight’s casket was received with full military honors “to express a nation’s thanks.”

Bryan, the captain of the flight, joined his father’s casket on the tarmac as the soldier was welcomed home, 52 years later.

“And the fact that it did is just remarkable, it’s actually miraculous,” he said. “There’s a lot to this, there’s competing emotions, not only because he’s coming home … which is a good thing, it is a very good thing, but there’s also the aspect that we’re reliving the loss.”

Sometimes in your travels you get to experience amazing things. We got the honor of bringing home a fallen Airman who's body was lost in Laos. To top it off.. his son who was 5 when he left for war, was the pilot who flew our plane to bring his dad home. GOD is Good and God Bless America..?? • Listen to the video because it explains the story ❤

“Our Southwest Airlines family is honored to support his long-hoped homecoming and join in tribute to Col. Knight as well as every other military hero who has paid the ultimate sacrifice while serving in the armed forces,” Southwest Airlines said in a statement to NBC News.

A funeral for Col. Knight will be held on Saturday at Holders Chapel United Methodist Church in Weatherford, Texas. The family will bury the Air Force pilot with any P.O.W.-M.I.A. bracelets that are returned to them in his coffin, according to The New York Times.

“They’ve waited five decades for this moment,” Mr. Proskow said. “It was just so dignified and respectful. It’s rare to have quiet time at an airport, especially in the middle of the day. It’s one of those weeks where people are looking for a good news story.”

I can’t stop crying. This is such an amazing story.

I am so happy that Col. Knight has come home and that he was received with full military honors.