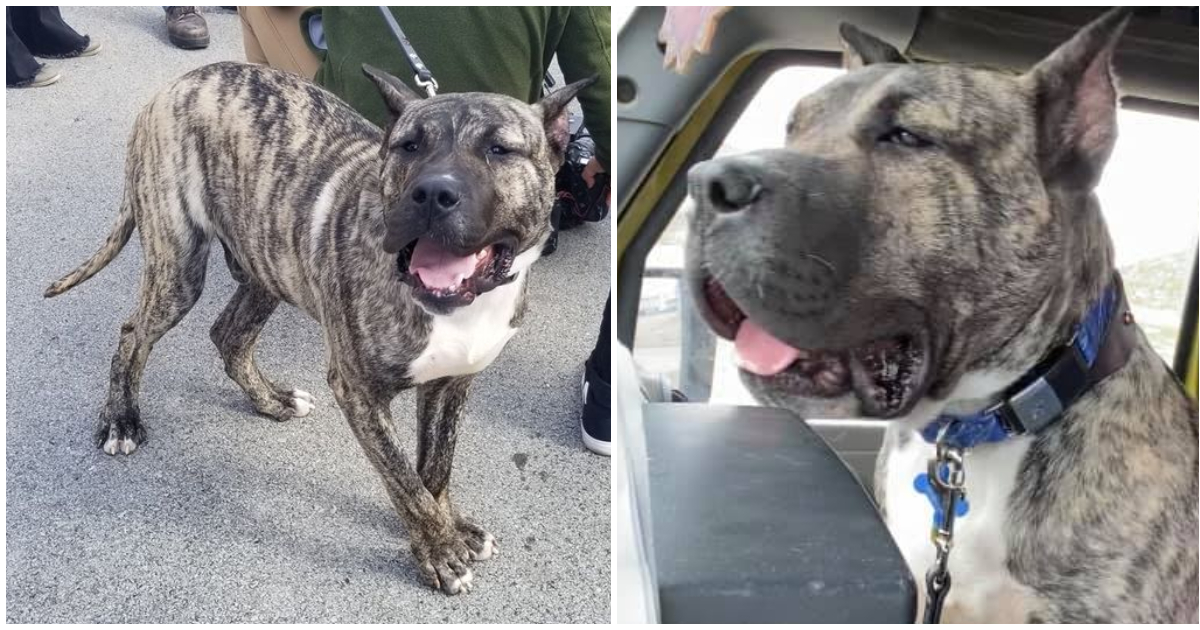 For the past month, animal lovers from all over have followed the story of Ethan, a dog who was found on the brink of death after being starved in a cage but has since made a miraculous recovery.

We’ve been cheering him on every step of the way, as he’s regained weight, inspired a new animal abuse law, and even found a forever home.

And after all that, Ethan has finally left the building — getting a touching final sendoff from the humane society that rescued him.

Ethan’s story began in late January, when he was found by a family outside the Kentucky Humane Society.

He was incredibly emaciated, too weak to even lift his head to eat. The KHS said he was the thinnest dog they had ever seen, and concluded that he had been kept in a cage for weeks without food. They gave him only a 50/50 chance of survival.

“The outline of every bone can be seen from his dehydrated skin, and his muscle loss is extreme, as his body tried to find any fuel to survive,” KHS wrote.

“Every day he is with us is a miracle.”

But soon, Ethan’s prognosis improved greatly. He began gaining back his body weight, started walking again and was able to come off IV fluids.

Ethan’s story made him a viral celebrity. Animal lovers around the world sent him cards and toys.

As his health returned, so did his beautiful personality.

“He is wagging his tail all the time now and wants love all day long. He is being treated like a king and is loving every minute of it!” KHS wrote.

Ethan further improved thanks to his foster family. He was taken in by KHS staff member Jeff Callaway, and quickly became a part of the family.

“He was so brave to explore his new surroundings,” Jeff said in a Facebook post. “He gets along so well with other dogs and cats. He’s very patient and gentle when interacting with anyone.”

Ethan fit in so much that Jeff and his family decided to make it official, and adopted him! Just a month after being found left for dead, Ethan found his forever home.

But of course, it’s always a bittersweet moment when such a special pet finally gets adopted out, so the KHS knew they had to throw Ethan a very special send-off.

On March 10, the KHS threw an “adoption celebration” for Ethan.

“We’ve been asked what makes so Ethan special,” the KHS wrote on Facebook, in a look back on their journey with Ethan. And really, in some ways, he isn’t. There are dogs and cats like him all over the world that are in the shape he was in or worse, and fighting for their lives.”

“On the other hand, Ethan is very special because he caught your attention. He caught the world’s attention. His near death and struggles have touched everyone’s hearts and brought people together in a way we haven’t seen in a long time. Ethan has served as a beacon of hope for so many and has shown what the power of love, hope and courage can really do.”

In the celebration, livestreamed on Facebook, Ethan went on his final “freedom walk” out of the shelter, greeted by all of his old friends:

The celebration concluded with Ethan’s final ride off from the shelter with Jeff and his family.

“Today was such a beautiful and emotional day for our staff,” KHS wrote. “We can’t get over how the community has rallied behind our baby Ethan and are so grateful for the overwhelming support that will help so many other shelter animals in our care.”

Ethan has now officially settled in to his new home with Jeff.

While this marks the end of his time with the Kentucky Humane Society, and the end of his “road to recovery,” you can still follow Ethan’s adventures: his new family has set up his very own Facebook account.

Congrats, Ethan! It’s been incredible following your journey to recovery and we wish you nothing but good times in your new home — you deserve it!