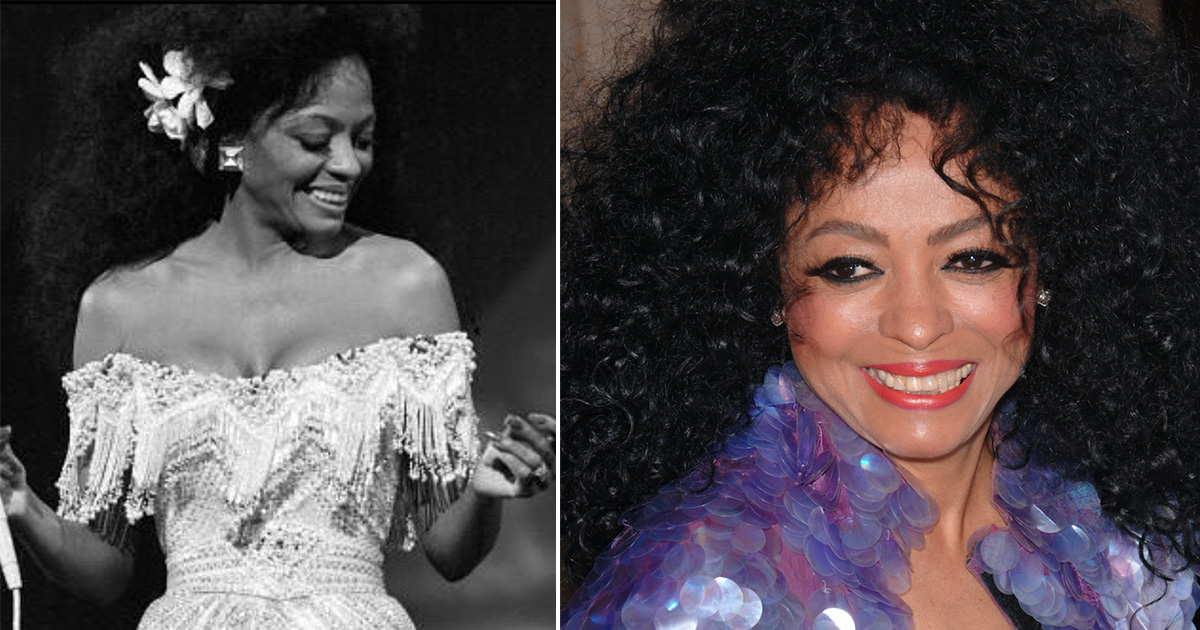 Diana Ross is the legendary Motown diva who truly keeps on giving. Even now, at 76 years old, hers is a voice that still gives me shivers every time I hear her sing.

This is the story of the magnificent Detroit native who was already a superstar by the time she reached her teens.

Personally, few things affect me as much as music. Some genres do it more than others, and more specifically, some artists manage do to it with their voices alone.

One of those artists is Diana Ross. The Motown icon has been singing, performing and acting over several decades, spreading joy and love, as well as hope for those in doubt.

She’s a pioneer and an important role model in both the US and the rest of the world. She was one of those stars who proved that anything is possible, no matter what you start off with.

Diana Ross started off in Detroit and quickly made her way up the ladder of success. Today, she’s a multi millionaire, owning houses in several locations across the US. But the road to fame hasn’t been an easy one – she’s certainly faced her personal struggles as well.

So just how did she get to where she is today? This is the story of the beloved Diana Ross.

Diana Ross was born on March 26, 1944, at the Hutzel Women’s Hospital in Detroit, Michigan, one of six children of Fred and Ernestine Ross. Her mother was a schoolteacher and her father was a former US Army soldier.

As a young child, Diana developed an interest in design and pattern-making at the Cass Technical High School in midtown Detroit. However, by the time she graduated in 1962, her interests had shifted to music. She was already a star in the making at the time.

During her teenage years, Ross worked at the huge Hudson Department Store in Detroit. It was a breathtaking 2,124,316 square feet, which made it second largest department store in the US, behind only Macy’s in New York.

Diana Ross grew up in a tight-knit family, but around her, there were plenty of talented musician. In the Brewster-Douglass district where she grew up, she made friends with the likes of Smokey Robinson and Aretha Franklin.

When Ross was still in high school, her friend Mary Wilson recruited her to a group called The Primettes. They would soon go under the name The Supremes, but we will get to their unbelievable success story in a short while.

Just then, Diana Ross had just started in the group, and she wanted her friend Smokey Robinson to hear them.

“I brought her to Motown. She called me when she was going to graduate from high school saying, ‘Hey, Smokey, I got a group, I want you to hear us’”.

So Diana went over to Smokey’s house with her group and sang.

“I loved them,” Smokey said.

Smokey Robinson thought they were really good. He was already involved with the group The Miracles, which meant he knew people in the music industry, first and foremost legendary producer and label founder Berry Gordy Jr.

He set up an audition for Diana and her group mates. Soon enough, they had started something which led to them competing with The Beatles.

The Primettes would soon change their name to The Supremes. The band was signed to Gordy Jr’s Motown Records. In 1961, they had their first No 1 hit with Where Did Our Love Go.

In 1966, Diana Ross and her beloved group would scale new heights with the release of the smash hit You Can’t Hurry Love.

It turned out to be a ground-breaking release from what was now an unstoppable group. For musicians who wanted to reach out to a bigger audience, there was one show they had to be on.

The Supremes were prominent guests on The Ed Sullivan Show – where The Beatles made their first US appearance – and Ed himself loved the group. They appeared on the show more than 16 times, more than any other Motown group,

“At first, being young, there was a little distance, but he became very close to us when he found we were kind of, you know, nice girls. He really liked that,” Supremes member Mary Wilson said.

To get recognized all over the country required help, and Ed Sullivan helped The Supremes to gain mainstream attention and fame. In 1964, they battled with The Beatles at the top of the charts.

Three years later, though, there was talk about the members going in different directions. In November of 1969, Ross left the band.

In January of 1970 – following the band being renamed Diana Ross and the Supremes a few years back – she made her last and final appearance.

It was time for Diana Ross to go solo. She had already risen to stardom with her girl band, but for some artists – as we’ve seen throughout history – the transition to being a solo act can be tough.

For Diana Ross, that wasn’t the case.

In May, 1970, she released her debut album Diana Ross. It quickly rose through the charts with songs like Ain’t No Mountain High Enough and Reach Out and Touch Somebody‘s Hand.

The former of those two became her first solo No. 1 song. She would later go on to be nominated for a Grammy for Best Pop Vocal Performance.

It didn’t take long before Ross was also transitioning into the Hollywood movie business. She starred in Billie Holiday Lady Sings the Blues, and the performance led to her getting an Academy Award nomination for Best Actress.

She later starred in films like Mahogany (1973) and co-starred along with Anthony Perkins and Billy Dee Williams in The Wiz (1978).

In 1980, Diana Ross had her next big breakthrough album. Nile Rodgers produced the album Diana, and it became a huge success. The album sold platinum and featured the hit Upside Down, entering No.1 on the Billboard chart, as well as the No. 5 track I’m Coming Out.

Neil Rodgers wrote I’m Coming Out. He was inspired to write the song following a visit to a trans nightclub, where there were plenty of Diana Ross impersonators.

He was shocked that the Motown superstar had such a big LGBT fan base.

“I thought, “Wait a minute. If I write a song for Diana Ross and talk about a disenfranchised part of her fan base and sort of make it for them, this would be an important record,” Rodgers said.

“No one thinks of Diana Ross necessarily on the frontlines of this, but [the gay] community and her [gay] fans love her and idolize her.”

Frankie Crocker, who was the biggest radio personality in the world at the time, didn’t like the album. She didn’t want people to assume Diana was in fact coming out and feared it could ruin her career. However, it ended up as a huge song and one of her most beloved tracks.

“Diana is definitely not homophobic, that’s for sure,” Rodgers added. “She is one of the coolest people you could ever meet. It was just that she now thought that we were saying that she was coming out.”

Diana Ross continued making music, releasing several albums and starring in movies including Out of Darkness (1994) and Double Platinum (1999). Ross dropped album after album, hit song after hit song. She was nominated for a total of 12 Grammy Award – though didn’t win a single one.

However, in 2012, she was to receive the most honorable award in music. Diana Ross received a Grammy Award for Lifetime Achievement, and, four years later, she was invited to the White House for a very special evening.

There, she received the Presidential Medal of Freedom – the highest civilian honor – from President Barack Obama. Also, in 2017, she was given Lifetime Achievement honors at the American Music Awards.

In 2011, Diana Ross was interviewed by Oprah Winfrey. The beloved talkshow host opened up with what Diana Ross meant to her, and it ended with tears.

“Imagine, for me, being 10 years old watching The Ed Sullivan Show on welfare, no possibility that I could ever sing, and watching her for the first time in a culture that had no Black people on television,” Oprah said, shedding tears.

“When you first see somebody on television like Diana Ross, who was glamorous and beautiful and represented literally possibility and hope—it was life-changing for me.”

Diana Ross has been married twice. In 1971, she tied the knot with music manager Robert Ellis Silberstein. Together, they had two children.

Diana ross also had daughter Rhonda Ross Kendrick with Motown Records founder Berry Gordy. However, when born in 1971, they decided that she would be raised by Diana and then-husband Robert.

However, they divorced and in 1986 she married Norwegian businessman Arne Naess Jr. They had sons Ross Naess, born in 1987, and Evan Ross, born in 1988.

These days Diana Ross, age 76, has several grandchildren that brighten up her every day. Her children have more or less all gotten into the show business – daughter Tracee Ellis Roos might being the biggest star.

Growing up, she said she always dreamt of being a singer. However, she was afraid of falling short because of her famed family name.

Speaking to Oprah Winfrey in early 2020, Tracee, who won a Golden Globe for her role in the 2014 TV series Black-ish, recalls an emotional moment with her mother Diana Ross when she heard her daughter sing for the first time.

According to Tracee, it was “one of the most beautiful moments” of her life.

“She pushed my arm and she turns to me and her face was covered in tears. And she said, ‘Finally'”.

Diana Ross grew up in Detroit. Just over 10 years ago, her childhood home was put out on the market – and the investor was seeking to sell it for $132,500.

Real estate broker Darin McLeskey said the investor didn’t know the house used to be Diana Ross’s childhood home, but it sure made it more expensive. He was said to have bought it for just $1,800 just eight months earlier.

The two-story house at 633 Belmont St. is 2,112 square feet and has four bedrooms and a light-colored stone-facade.

“It’s generating a lot of interest,” broker Darin McLeskey told the Detroit Free Press. “But, there’s also a lot of nosy people overall who just want to get inside of a famous person’s house, too.”

So, where does Diana Ross live now?

Firstly, it’s easy to say that the legendary musician has done a great job keeping things private, since it’s pretty hard to know where she actually resides.

Ross has been a resident in the fashionable Belle Haven district in Greenwich, Connecticut, for many years. The area has residents like Kathy Lee Gifford and Judge Judy.

She bough her 1920’s-era waterfront mansion in Belle Haven in 2006, according to the Greenwich Time. The estate has 11 bedrooms, six bathrooms, five fireplaces, a hot tub, pool, a tennis court and two apartments. However, a year later, the put the mansion up for sale at an asking prize of $39.5 million.

In 2009, Ross had to drop the asking prices for her estate, also known as “Quarry Farm”, because of the real-estate market.

“A ton of senior-level executives live here,” Mark Pruner, a sales executive for Berkshire Hathaway N.E. Properties, says. “It tends to be quieter money. We don’t have a lot of boldface names. People in Old Greenwich prefer to keep their names out of the news.”

Diana Ross is also said to have had a mansion in West Hollywood, which she renovated before her son Evan’s wedding.

We just absolutely love Diana Ross and her music. She’s one of a kind, a legendary Motown diva with a voice that will live on forever.