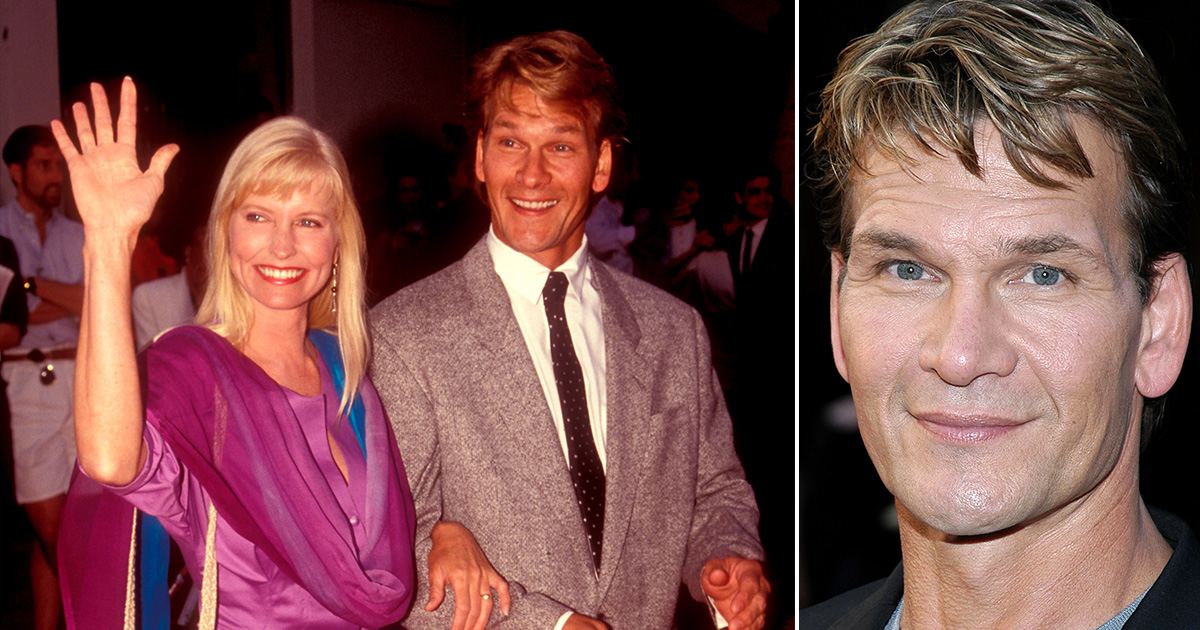 Patrick Swayze was a truly beloved actor who took the world by storm with his portrayal of Johnny Castle in Dirty Dancing.

Now, 11 years after his passing, widow Lisa Niemi has shared an emotional piece of writing from Swayze which is bringing fans to tears.

Still to this day, people around the world mourn the wonderful and celebrated actor Patrick Swayze. He passed away in 2009 from cancer, aged just 57, but his legacy lives on.

Swayze had a fantastic career, being nominated for both Golden Globes and Academy Awards, along with being awarded with a star on the Hollywood Hall of Fame.

Not to mention the fact that his love story with wife Lisa Niemi seems like something taken straight out of a Hollywood movie.

Patrick Wayne Swayze was born on Aug 18, 1952, in Houston, Texas. He and his four siblings were raised by parents Patsy and Jesse Swayze.

Mother Patsy was the director of the Houston Jazz Ballet Company and father Jesse worked as a chemical plant engineer draftsman.

At a young age, Swayze would turn to the art of dancing. His mother introduced him to ballet at a dance school and, before long, Swayze had fallen in love with it.

However, his fellow classmates often teased him because of his interests in dance. As it would transpire, Swayze was destined to get the last laugh, becoming one of the biggest and brightest movie stars on the planet.

Patrick attended Waltrip High School in Houston, with classmates listing him as “Buddy Swayze” in his yearbook. During his time at the school, he engaged in both football and drama classes, before graduating in 1971.

By that time, Swayze had already started to master ballet. He’d fallen deeply in love with style of dance at his mother’s dance school. Little did he know that he would also meet the love of his life there.

Swayze spent plenty of time at the Houston Jazz Ballet Company. One one occasion, in one of his mother’s classes, he saw a girl that he just couldn’t take his eyes off.

Lisa Niemi had also grown fond of ballet. At age 15, she met Swayze – then 18 years-old – for the first time. Even so, it would be a while before affection really started to bloom between the future married couple.

“If I started putting on a pose or doing my Casanova routine, Lisa would turn away and not say anything,” Swayze told People. “We had a lot of dates in silence.”

Patrick knew he couldn’t let her go. As the years went by, she also found she liked him. And thus, they soon became a couple.

“I knew she was the smartest chick I’d ever met. [Before Lisa] I had been meeting girls with names like “Mimi” and “Angel”. And for a long time, I didn’t feel like I deserved her,” Swayze explained.

Eventually, Patrick and Lisa fell deeply in love. Nothing and no one could pull them apart. Not even the fact that Swayze would soon be a worldwide superstar could change his love for her.

On June 12, 1975, the two got married. It was a fairytale romance that was missing only one thing: Lisa and Patrick had no children.

Legendary TV host Barbara Walters didn’t need many words to describe Patrick and Lisa’s relationship. She’d met them many times, and said their relationship was “extraordinary”.

“The way he looked at her, the way he held on to her, the way she smiled., I can’t really imagine one without the other,” Walters said.

Following his graduation from high school, Patrick Swayze was already a great dancer. He attended dance classes at both the Harkness Ballet School and Joffrey Ballet School in New York City.

He got his first job as Prince Charming in Disney on Parade. Shortly afterwards, he made his Broadway debut as Danny Zuko in the original production of Grease.

Swayze then landed a small part in Skatetown U.S.A in 1979, which was actually his film debut. Two years later, he made his debut on television in the classic series M*A*S*H, where he played a solider diagnosed with leukemia. In 1983, he appeared with Matt Dillon in Francis Ford Coppola’s The Outsiders, which definitely lent Swayze’s career a healthy boost.

After starring in six episodes of the series North and South, Swayze landed the role that would change his life, putting him alongside some of the greatest.

Swayze’s performance as dance instructor Johnny Castle in Dirty Dancing, 1987, was a huge success. The iconic dance moves performed alongside Baby (Jennifer Grey) have since been imitated hundreds of thousands of times around the world. And, of course, the soundtrack is memorable still to this day.

The Time of My Life won both an Academy Award for Best Music, Original Song, and a Golden Globe in the “Best Original Song – Motion Picture” category.

Swayze, meanwhile, was nominated for a Golden Globe in the “Best Performance by an Actor in a Motion Picture – Comedy or Musical” category. But when it comes to being popular with the audience, he won the highest and most prestigious award of all.

In 1990, Swayze was awarded a second Golden Globe nomination for his role as Sam Wheat in blockbuster movie Ghost. The movie, which co-starred Demi Moore and Whoopi Goldberg, became highly popular, grossing over $500 million worldwide.

The awards and plaudits were likely great fun for Swayze. Sadly, though, that same year, he and beloved wife Lisa had experienced a tragedy.

Since the very day they got married, Swayze and Niemi longed to start a family. They were euphoric when Lisa became pregnant. Their joy turned to devastation, though, when she miscarried.

“It broke his heart. He wanted to be a dad more than anything. He had skills, knowledge, kindness, and love – everything a child would want,” Swayze’s long-time friend and bodyguard Frank Whiteley said.

“I was born to be a dad,” Swayze said according to Closer magazine.

Overnight, Patrick Swayze had turned into a superstar. He was named People Magazine’s “Sexiest Man Alive” in August, 1991. Then, in 1997, he was given the prestigious honor of a star on the Hollywood Walk of Fame, for his contribution to the film industry.

The balletically athletic actor had risen to stardom with amazing performances in both Dirty Dancing and Ghost. However, the 1990’s wasn’t easy on him.

However, his performances weren’t well received among critics and audiences, which led to Swayze changing paths regarding his acting.
Instead of performing solely for an audience sat in a cinema theatre, the Dirty Dancing star headed to Broadway.

In 2003, he was the replacement as the lead role of “Billy Flynn” in the revival of the musical Chicago. The production toured the United States, playing all over the country.

Fate might have also seen a return to Dirty Dancing for Patrick, as well. According to IMDB, he turned down $6 million to do a sequel of the beloved movie.

For him, though, fame didn’t matter. Patrick Swayze and Lisa Niemi considered their love for each other the most important thing. Tragically, their story was to end in mourning.

Patrick Swayze was diagnosed with Stage 4 pancreatic cancer in late 2007. Speaking to Access Online, the actor said he noticed how his body was chancing on New Year’s Eve of 2008. He said he “dropped about 20 pounds in the blink of an eye.”

For Lisa, it was one of the toughest things to ever hear.

“For the first few weeks, it was like being in a nightmare you couldn’t wake up from,” she told Access Online in January of 2009.

Swayze, a life-long heavy smoker, was treated at the Stanford University by Dr. George A. Fisher. It was serious. But Swayze wouldn’t quit working, or smoking.

“I’ve seriously cut down,” Patrick told Barbara Walters. “I was one of those dumb ones that started back in the Marlborough Man days whose — you know, it was cool. I’m a cowboy. But I’ll tell you one thing. I will talk so hard core against, against smoking for kids. That’s one reason I’ve never smoked in front of children.”

He starred in 13 episodes of the TV series The Beast, which was filmed over at least 12-hour days.

“I think everybody thought I was out of my mind, you know, thinking I’m gonna pull off a TV show,” Swayze said.

The world mourned the popular, beloved and well-known actor. Many thought that it was his continuous smoking habit that had killed him.

Patrick Swayze – cause of death

Yet, according to his doctor, that wasn’t the case. Instead, he saw it as “quite an accomplishment” that Swayze survived as long as two years with the condition.

“I think at the point that one is already diagnosed with cancer, there’s little additional harm in it,” Dr. Fisher said. “And if it — it seems to provide him some comfort or partly identity of who he is, I certainly have no objections to that.”

Before his passing, Patrick provided his mother with a house and also sent her a monthly allowance, which wife Lisa continued to do. However, the aftermath of Swayze’s death was messy.

Lisa Niemi claimed in an interview that Patrick had been abused by his mother as a child, with his brother and actor, Don Swayze, threatening legal action against her.

He left his $40 million fortune to his wife. Swayze’s family would once again turn to Lisa with anger as she reportedly sold his movie memorabilia on E-Bay, with his leather jacket from Dirty Dancing and some of his cars being two of the items.

“These were family heirlooms. It’s a slap in the face that she’s selling these precious memories,” his niece Danielle Swayze said.

“No matter what, it’s still a letting go. There’s always a little bit of loss associated with that,” Lisa explained. “While it’s a very positive thing to do, it’s a difficult thing to do. I’m such a lucky woman to have had a man who loved me as much as Patrick did.”

In 2014, Lisa Niemi took – as she said – “a leap of faith” when she married jeweler Albert DePriscan, whom she met through mutual friends.

She struggled with her emotions regarding marrying someone else after Patrick. However, she loved Albert and he knows she always will love her first husband.

“Albert knew I still loved Patrick and would always love him, and told me, ‘and I know you love me, and I love you.’ How could I not marry this man?,” Lisa told People. “As I had time to process the change my life was going to take, my doubts became less and less, and I became more and more sure.”

Still, to this day, Lisa shows her love for her late husband Patrick Swayze.

In September, on the 11th anniversary of his passing, she took to Instagram to post an emotional text about him, along with a beautiful picture.

“Celebrating a wonderfully strong, sensitive & special man on the 11th anniversary of his passing. So missed. Can’t help but feel a dark cloud today (and all last week!), but grateful for what we had together. What a journey! Blessed, even with the tears”, Lisa wrote.

Patrick Swayze will always have a special place in our hearts. He was a wonderful actor and dancer, but, foremost, a loving husband and fantastic man.