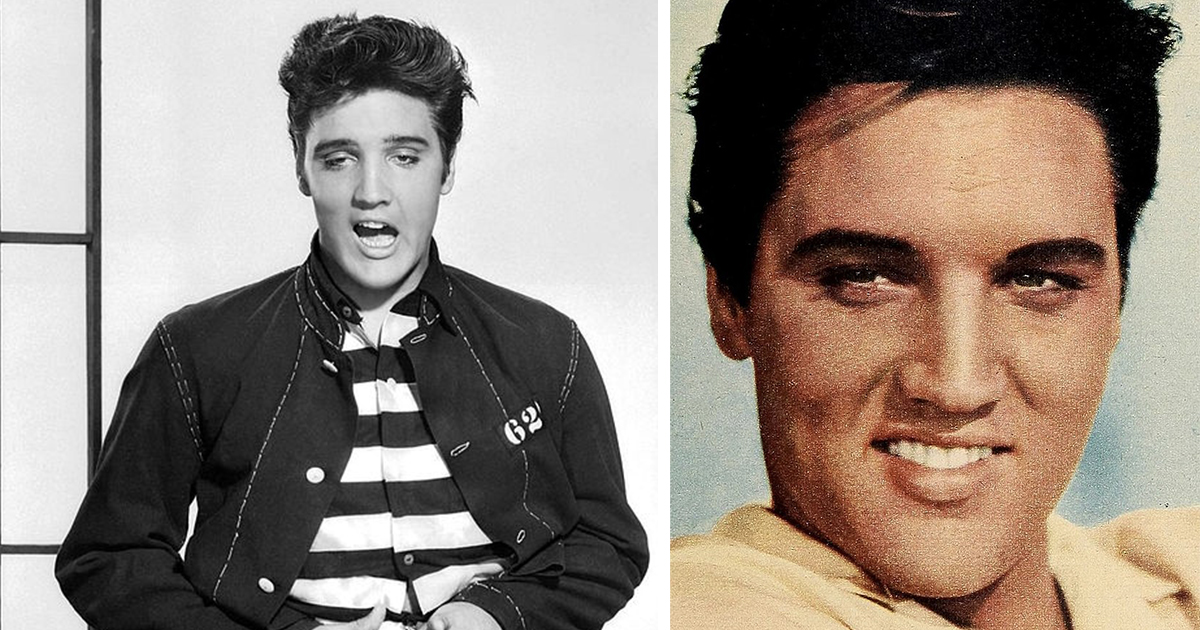 Elvis Presley’s legacy will forever live on, that much is beyond question. His daughter, Lisa Marie Presley, has also enjoyed her own successful career. And now, one of the King’s grandchildren is making it big in show business as well.

How could you miss another Presley, you might think? Well, the fact is that Riley Keough decided not to use her incredibly famous last name. One thing is for certain, though, and that’s that she definitely looks a lot like her iconic and legendary grandfather!

Any artist in music will acknowledge that they have other artists that influenced them in making a specific type of music, a sound or maybe a verse. You can track the similarities back many generations, from today’s electronic music to heavy metal bands and so on and so on. Often, the foundations of modern music genres have their foundations in the very same person if you go back far enough.

Elvis Presley was truly one of a kind, giving his rock ‘n’ roll music to the world in the most impressive way possible. Still to this day, his music has a great influence on many bands, and his wonderful songs are played on radio stations all over the world.

Elvis Presley offered the world something new and unique. Not only did he write and recorded some of our great classics like Jailhouse Rock, In The Ghetto, Hound Dog and Love Me Tender, but he was also a well-respected and iconic entertainer, giving his fans every little inch of his charisma and talent.

Elvis sadly away in August of 1977, but his music and legacy will forever live on. It does so through all of us playing his music, honoring him in the best and only way we can. But it also lives on through his family, in which several of his family members have turned into entertainers themselves in different ways.

One of whom is his daughter Lisa Marie Presley, who’s had a wonderful career in her own right.

Now, however, one of his grandchildren also has proven herself to be a great talent, though not specifically in music. Riley Keough, who actively chose to not use her grandfather’s name, is a great talent in show business. But the “secret” – call it what you will – that she’s Elvis’s grandchild is well-hidden.

Lisa Marie Presley had a rough start in life. When she was born – on Feb 1, 1968 in Memphis, Tennessee – everything seemed to be going good for her. She lived at the famous Graceland estate, but at the age of 4, Lisa Marie Presley’s parents Elvis and Priscilla Presley decided to get a divorce.

Lisa Marie moved to Los Angeles with her mother Priscilla. She still spent plenty of time with her dad at Graceland, but when she was 9 years old, she witnessed the most terrible thing a child can experience.

Sadly, Lisa Marie Presley was present at Graceland when her father was rushed to hospital, where he would later pass away.

“I knew something was wrong, because I was in my room which was right next to his bathroom,” Lisa Marie Presley recalled. “So I knew that something was very wrong. All the commotion and everything. I was a wreck.”

Speaking to The Express, Linda Thompson, who Elvis dated for a short time after his divorce with Priscilla, recalled getting the tragic phone call while at home in her Los Angeles apartment. She was the first person 9-year-old Lisa Marie Presley called on the night her famous father passed away.

“Tuesday I got the call from Lisa Marie, screaming on the phone, ‘My daddy’s dead, my daddy’s dead!’” Linda Thompson recalled.

Lisa Marie Presley was left Graceland in her father’s will, which she later opened up to the public as a historic museum.

Her teenage years were a struggle and resulted in her dropping out of school and later abusing drugs. She later checked into a rehab clinic where she met musician Danny Keough. In October of 1988, the couple tied knot.

Presley and Keough welcomed two children, daughter Danielle Riley (born 1989) and a son named Benjamin (born 1992). In July of 2020, however, Lisa Marie Presley and her family went through another tragedy.

In 2014, speaking to Healthy Living Magazine, she said her protectiveness and love for her children would always be the same.

“I am very protective. I just smother them in love and I am also ferociously protective,” Lisa Marie said.

“When they get older sometimes I don’t think it ever ends. When they get past 18 I think their problems just get bigger to be honest (laughs); that’s always a struggle. We all are very, very close. The older ones absolutely adore the younger ones and they help me with them. We all kind of hold each other up; we are all each other’s best friends. I’m theirs but I am also their mother.”

Tragically, Benjamin was found dead this year in Calabasas, California, age 27. The cause of death was listed as suicide, according to the Los Angeles County Medical Examiner’s Office. Lisa Marie was heartbroken over the news.

Lisa Marie Presley divorced Keough in 1988 and married Michael Jackson a couple of months after the divorce was finalized.

She pursued her own career in music, and released her first album, To Whom It May Concern in 2003. The album reached the No. 5 spot on the Billboard 200 charts, and was later certified gold. In 2006, Presley released her second album, Now What which was also certified gold.

Lisa Marie is a very talented woman in her own right, but people all around the world will always compare her with her iconic father, Elvis. That in itself is something that’s been difficult for her.

“I get exposed to more and have more opportunities; however, there is a lot more expected out of me, which is the other aspect of that,” she told Healthy Living Magazine.

“Sometimes I’m treated like I am my father, but I am not him. That is expected. There is always that comparison, nonstop, that does put a lot more on me. Even though I may have some extra opportunities.”

Just as Lisa Marie is a talented woman, so is her daughter.

Riley Keough, the grandchild of Elvis Presley, is now also making it in show business; she’s on her way to becoming a true Hollywood star, as well as having inherited much of Elvis’s looks and talent.

Riley Keough was born May 29, 1989, in Los Angeles, California. When she was only 6 years old, her mother Lisa Marie and father Danny divorced. In the aftermath of their separation, Riley would move into a very famous place.

She spent most of her time at the famous Neverland Ranch, since her mother married Michael Jackson shortly after her divorce from Danny.

Speaking to The Guardian, as quoted by Hollywood.com, Riley says she loved life at the ranch, as well as the calmer, less luxurious lifestyle with her dad.

“I grew up very privileged with my mother,” Riley Keough said. “But my dad didn’t live like that. And I think experiencing both sides has been helpful. My father had mattresses on the floor of his apartments. He lived in cabins and trailer parks. He just didn’t have much money.

“Actually, my memories of growing up with him were so colorful and eccentric and fun,” she continued. “It was a good vibe, you know? When I was like eight I told him, ‘I want to grow up and be poor like you!’ He was eating a bowl of cereal. I didn’t realize how wildly offensive that was!”

Lisa Marie divorced Danny Keough when Riley was six, then entering into a two-year marriage to pop superstar Michael Jackson.

“My daughter is very busy acting, has a crazy schedule,” Lisa Marie said. “It’s a constant struggle and juggle to get everybody in the same place at the same time and keep us close. None of us are happy if we haven’t seen each other past a week or two. It’s just a normal family.”

Many teenagers dream of moving to Los Angeles and launching themselves headfirst into show business, whether it’s in film, music or dance. However, the road can be a bumpy one, and many times, we’ve heard of people really struggling in the beginning.

For Riley Keough, that wasn’t the case. She decided early on that she wanted to go into show business, and within a week, she had herself an agent. She didn’t use the name “Presley”, which she says was an advantage.

Despite having grown up with fame and choosing to pursue an acting career, Riley says she is uncomfortable with the attention that comes with stardom.

“I didn’t have it as hard as my mom. I didn’t have his last name,” she told Nylon Magazine. “There’s something about that … writing my name, it’s not Presley. That’s heavy.”

Lisa Marie Presley was very clear with her daughter. She didn’t want Riley to grow up being another celebrity child, but instead pursue her passion without any added pressure.

“She didn’t really put attention on it,” Keough explained. “It was there. We’d get photographed doing stuff, but I didn’t see a tabloid until I was 15. I wanted to grow up before I started acting. I wanted to live my life a bit. I also really don’t like attention on me, so it was kind of coming to terms with all of that.”

Growing up with a grandfather named Elvis Presley must’ve been a special thing. Riley’s mother, however, tried hard to show her pictures of the family album in which Elvis was portrayed as a “normal” grandfather rather than a world-famous known rock ‘n’ roll icon.

At 18 years of age, Riley already had started her own career as a model. But it wasn’t a great thing around the house.

“I remember [my parents] saying, ‘Acting is a heartbreaking industry, and we don’t think you should do that.’ So I was like, ‘Yeah, all right, I’ll just be a model then and make some money’,” Riley Keough told Interview Magazine. “And they were like, ‘No, no, no, acting is great!'”

Riley became a successful model in her 20s, working for brands like Dolce & Gabbana, as well as Dior. At the same time, her passion was acting, and in 2010, she starred alongside Kristen Steward in The Runaways.

Since then, Riley has starred in several films, including Magic Mike (2012) and Mad Max: Fury Road (2015), among others.

In 2016, she also got a part in the television series The Girlfriend Experience, for which she was nominated for a Golden Globe for Best Performance by an Actress in a Limited Series or Motion Picture Made for Television.

At the moment, Riley’s been filming several projects set to air in 2021!

We hope to see her in many films going forward. And who knows, maybe she’ll be standing on stage singing in the future. Just like her beloved grandfather Elvis Presley.