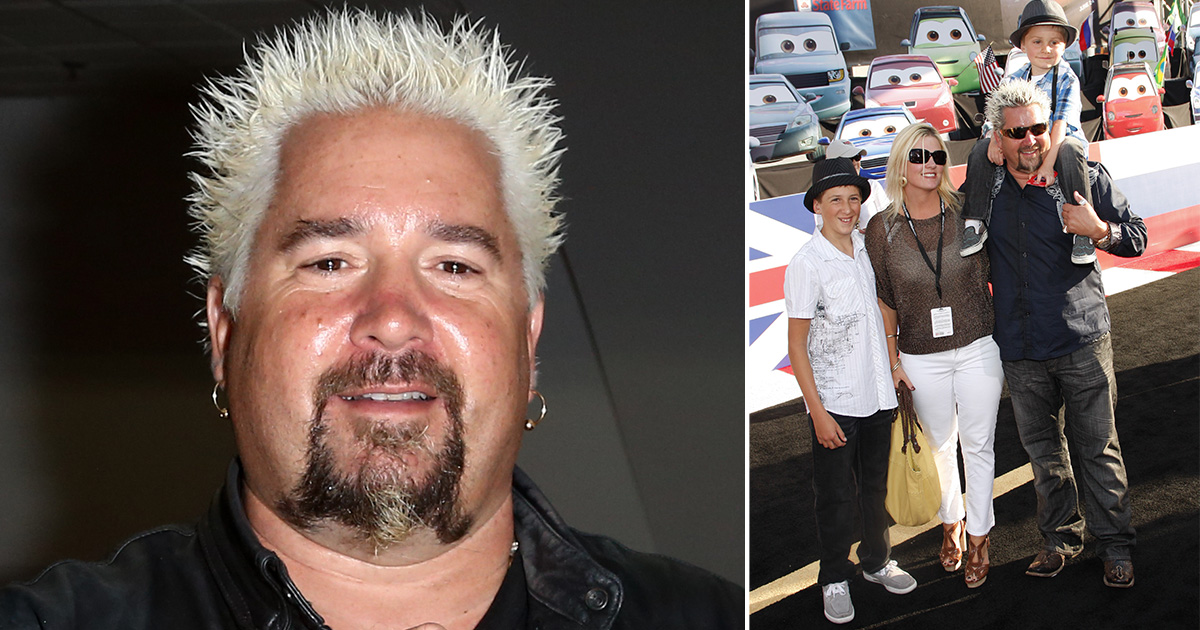 Guy Fieri’s story is a truly inspiring one, with the kitchen legend having transformed himself from unknown guy on The Next Food Network Star into a true rock ‘n’ roll chef. But behind all the hard work – and eating on television – he has a loving family that supports him every step of the way.

Here’s all you need to know about the Flavortown family that have been the key to helping Guy establish a family food empire.

When it comes to different talent shows on TV, no matter if it’s singing, dancing or cooking, the winners are often hailed as the next big thing. In reality, of course, there aren’t that many who live up to the hype.

In that respect, there’s a huge exception, one with spiky hair, a trademark goatee, and a red Camaro. Chef Guy Fieri won Season 2 of The Next Food Network Star in 2006. Since that competition, he’s grown into a food superstar.

His rise to fame has been meteoric to say the least, prompting hit shows such as Guy’s Big Bite and Diners, Drive-ins and Dives, along with several other big projects.

Guy himself travels around the country trying different types of food, with some being pretty far from what many would eat. Anyone else fancy a grasshopper taco?

The chef’s surge to prominence culminated in May 22, 2019, when Fieri became the third chef in history (after Bobby Flay and Wolfgang Puck) to land a star on the Hollywood Walk of Fame.

But even though the over-the-top, enthusiastic chef has risen to fame, he is still as passionate as ever about his food.

Besides having a successful career of his own, he has also created a wonderful family along with wife Lori Fieri. It’s fairly obvious to anyone who looks that things just wouldn’t be the same without her.

Guy Fieri was born on Jan 22, 1968 and grew up in California. As a child, he was already passionate about food, starting his first business aged 10.

With the help of his father, Guy built and operated his own pretzel cart, which later on would become a more influential thing.

Through the Guy Fieri Foundation, the famous chef and TV star funded the Pretzel Cart Project, giving children’s organizations their own pretzel carts. The hope is to help the children raise funds and teach them things such as how to run a business and how to cook, along with, most importantly, showing them that nothing is impossible.

Fieri attended the University of Nevada in Las Vegas, during which time he held several positions at different restaurants. He earned a degree in Hospitality Management and later on worked at a Stouffer’s restaurant.

Following work as a district manager for Louise’s Trattoria, Fieri opened up his own place. Together with partner Steve Gruber, the restaurant called Johnny Garlic’s opened its doors in 1996, later on opening two further locations.

Even though 1996 was a huge year in Fieri’s life work wise, nothing compared to what would happen four years earlier.

While working at a restaurant in Long Beach, California in 1992, Guy met his future wife Lori. She and her friend, a former employee that had been let go, walked in to grab a bite.

“They weren’t supposed to be there,” Guy said in an interview with Delish. “I was talking to her friend and saying ‘Hey, listen, wait a few weeks before you come in,’ and standing behind her is this blue-eyed, blonde girl giving me this mean mug.”

Lori came to her friend’s defense. “She said, ‘You can’t make us leave,’ and I was like, ‘You don’t have to,’” Guy explained.

The two friends decided to stay. It sure looks as though it was fate that brought Guy together with Lori, who was on a roadtrip heading for San Diego at the time.

She never made it to San Diego.

At the time, the world famous chef didn’t have the trademark look he has now. Speaking to People, Lori explained that Guy styled himself differently back then.

Apparently, he had dark hair and wore a suit to work every day. Most noticeably, he didn’t have his trademark beard.

“When I first met him, he had no goatee,” Lori told People. “He had dark hair. He wore a suit to work every day. Now I look at him and I’m like, ‘Where’s that man I married with the whole clean look?’”

“I always say, ‘When are you going to change your haircut?’ But it stuck and it’s him,” she continued. “I tease him every once in a while. And I do want a little change sometimes. But that’s like me changing my hair to black. I mean, I’m not going to do that for him, so.”

The couple fell in love and tied knot in 1995. One year later, around the same time Guy opened up his first restaurant, the couple had the first of their two sons. Hunter was born in August 1996 and Ryder arrived almost 20 years later in December 2015.

By 2005, Guy Fieri had grown into a well-known chef, and continued to work on his craft. But were it not for his wife Lori, he might never have made the leap from ‘well-known’ to full-fledged star.

Winning ‘The Next Food Network Star’

Lori knew what her husband could do in the kitchen. She encouraged him to send in a video to audition for the reality television show The Next Food Network Star. He did so, and got a shot at competing!

However, at the same time, Lori was pregnant with their second son Ryder and Christmas was coming up. Guy was hesitant of signing up to the show, and contemplated passing on the opportunity.

But Lori was sure beyond a doubt regarding what her spiky-haired husband should do.

“I said, ‘Listen, this is the opportunity of a lifetime,” she recalled. “If you don’t try, you’ll never know. You need to go.’”

Guy accepted the invitation and headed to New York to compete in The Next Food Network Star. And wow, did he do a great job. Guy came home for Christmas knowing that he was in the top two, but he couldn’t tell his wife.

Months later, the family travelled to New York to hear the final announcement on who was going to win. Guy, as we all know, won the entire competition, and his success story started.

“If I could go back and relive that whole experience again, I would,” Lori says. “It was such a high.”

Since then, Guy has grown into an American star, boasting his own TV shows and restaurants. First and foremost, though, he is a loving father and husband who spends plenty of time with his family.

Sure, he loves making delicious meals for loved ones. But in fact, his own absolute favorite dish is something that his wife Lori makes.

“There’s an old school recipe she makes that she brought home from where she grew up in Rhode Island,” Fieri told Today Food. “It’s one of the first things she ever cooked for me and it’s still a favorite of mine.”

The life of a TV celebrity can be hectic, especially if, like Fieri, you own restaurants all over the country at the same time.

Without his wife, it might not have been possible. Once, Guy decided to cook on a 700-passenger cruise ship. It was Lori who helped to serve all the food.

Guy hails his beloved Lori as extremely understanding and supportive, which has been key for him in growing his empire in the food business.

“My wife and I have gone from being married at a young age to being where we are now — to get here, you have to be willing to adapt and understand,” Fieri said. “It’s all compromise and understanding.”

Of course, whilst he remains a praised chef and TV host, it hasn’t all been sunshine and rainbows for Guy. The 52-year-old has certainly received plenty of criticism over the years.

In today’s social media climate, which can be harsh at times, it’s easy for people to reach out to celebrities through blogs and other platforms, criticizing their work or leaving horrible comments whilst hiding behind relative anonymity.

Fortunately, it’s not really something that gets Guy worked up. He responds to his haters with a few well-spoken and wise words.

“If someone has a concern with what I eat, or how I dress, brother, take all that energy and go focus on something for yourself,” Guy told Parade.

“I’m not going to make everybody happy. And anybody who wants to hate is going to hate. You have to be confident in who you are and what you’re doing.”

That said, there have been instances of worry for Guy, such as when he opened Guy’s American Kitchen & Bar in New York in 2012. It received scathing reviews, including one by New York times critic Pete Wells that gave the restaurant a zero-star review.

“Why is one of the few things on your menu that can be eaten without fear or regret – a lunch-only sandwich of chopped soy-glazed pork with coleslaw and cucumbers – called a Roasted Pork Bahn Mi, when it resembles that item about as much as you resemble Emily Dickinson,” Wells wrote.

The New York Times piece is being described as “likely the most widely read restaurant review ever”.

Even though the New York restaurant, which closed in 2018, wasn’t a success among critics, it definitely made money. According to Restaurant Business Magazine, Guy’s American Kitchen and Bar took in about $17 million, finishing amongst the top 50 most profitable independent restaurants in the country over the last four years, as reported in 2017.

Say what you will about Guy’s business, but his dynasty appears secure. Hunter Fieri, now 24 years of age, is following in his father’s footsteps.

“He ran sauté on a Saturday night. He knew how to run the show,” his dad Guy said in an interview with Delish in 2018.

Hunter studied at the University of Nevada, just like his father. He chose the university because of its program, not because of his dad. In December of last year, he graduated.

Because of the COVID-19 pandemic, it’s unclear if he will be able to travel the world as planned. But one day, Hunter wants to own his own restaurant, just like his superstar dad.

“My dad opened his first restaurant when he was 28. It’s crazy. I want to have the most knowledge that I can before I go and open a personal restaurant like that,” Hunter told the New York Post.

“[My dad] worked his butt off, and he taught me the same work ethic: Keep working, and keep your head up high. And learn everything you can.”

For Mother’s Day, meanwhile, Hunter put out a heartwarming tribute for his beloved mother Lori.

Irrespective of anything else, it’s safe to say that Guy Fieri has made a name for himself in the world of TV and food.

Due to the ongoing pandemic, many restaurants have unfortunately had to close due to social distancing measures and little-to-no customers, which has put millions of people out-of-work.

Guy Fieri wanted to do something about it. He partnered with the National Restaurant Association Educational Foundation and helped the fund raise more than $20 million for out-of-work restaurant workers, CNN reports.

Time will tell if Guy and Lori’s son, Hunter – and maybe 15-year-old Ryder – will one day be seen roaming around the country in a red Camaro. It that does transpire to be the case, we hope they remember to try the Grasshopper tacos, just like their dad once did.

At the same time Guy has been doing his thing in the food business, we also want to acknowledge Lori for being such a wonderful mother and wife. We wish the Fieri family all the best!