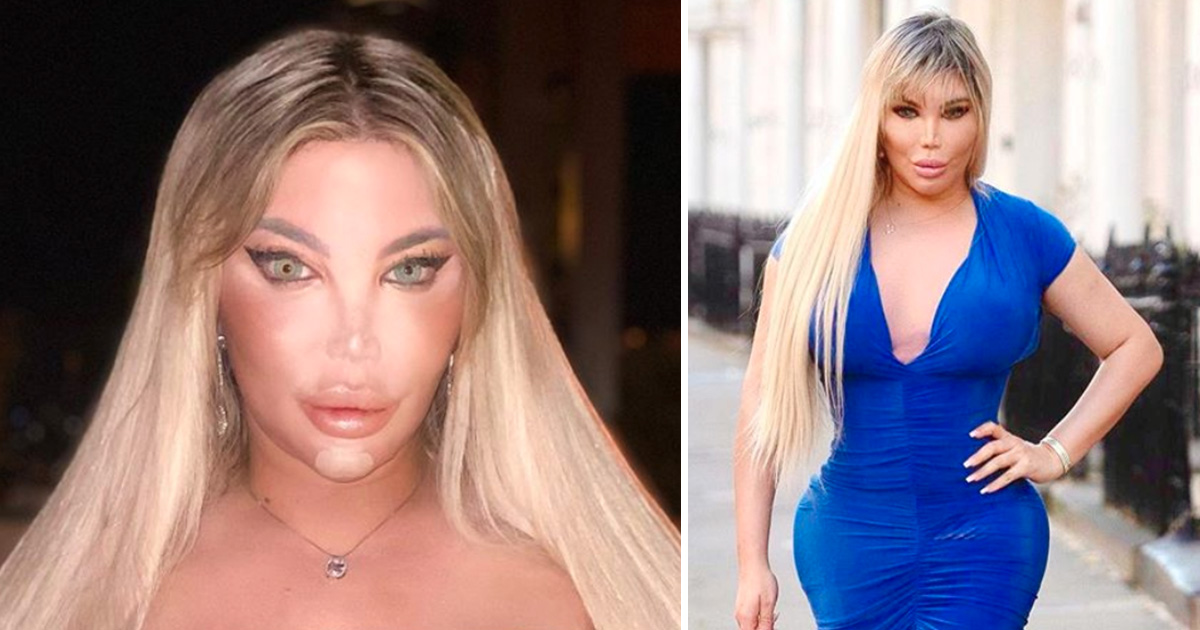 It’s not common, but once in while you hear about people undergoing plastic surgeries. One might want to change their nose, breasts, lips or maybe just give the face som extra glow.
But Jessica Alves, formerly known as Rodrigo Alves, took it one, or maybe 70 steps further, changing her appearance into a human Barbie doll.

It’s OK not to be completely happy with your own appearance and body. No matter what you do, however, always remember that you’re beautiful and capable of doing amazing things no matter what people say.

Some people chose to undergo plastic surgeries in an attempt to alter their appearance. Jessica Alves took it one step further, and recreated her entire appearance.

We will start the story of Jessica in early 2020. In an interview with The Mirror, Jessica Alves, born Rodrigo, came out as transgender.

“I’m known as Ken but inside I’ve always felt like Barbie,” the 36-year old said. “I finally feel like the real me. Glamorous, beautiful and feminine.”

From that day, she goes by Roddy ans use “she” and “her” pronouns.

Came out as transgender

Jessica received hormone injections which gave her feminine hips Along with blonde hair extensions and fake eyelashes, she now wears a D-cup bra as well. In July, she announced that she would go by the name Jessica.

“For years I tried to live my life as a man. I had a fake six pack put in, I had fake muscles in my arms but I was lying to myself,” she said. “I’m a woman and have always had a feminine brain. Now my body matches my mind.”

Through the years Jessica’s been seen on Celebrity Big Brother in 2018, and last year, she release a song with Italian plastic surgeon Giacomo Urtis called Plastic World. In addition, she has over 1 million followers on Instagram and previously worked as a flight attendant.

So how did she get here?

Jessica Alves, former Rodrigo Alves, was born on July 30th, 1983, in Sao Paolo, Brazil. Born to a British father and Brazilian mother, already as a young child her grandfather bought Jessica dolls, allowing her to dress however she wanted.

A good ideal for any child is not having to adapt to norms that might have been set by society and instead doing what feels right, some would argue.
This was also from where Alve’s obsession with dolls came from, and she would show the world in what way.

“Growing up, I was very feminine and used to play with dolls and wear my mum’s dresses and heels,” she said, adding that she hated her looks during her teenage years.

“I like to laugh, but it used to make my nose very wide. I was very bothered by that. My family members often wondered aloud from whom I had inherited that hideous body part. That was the reason for me to have it addressed first.”

Jessica Alves moved to London to study at the prestigious London School of Economics. In 2004, she decided to undergo a plastic surgery for the first time. That was the start of an addiction to alter her physical appearance, and she couldn’t stop.

“I was never completely satisfied after an operation, and I still am not,” Jessica said.

In total, Jessica’s spent more than half a million dollars on surgeries. Soon, her classmates couldn’t recognize her at all. It was clear that se suffered from morphodysphoria, which is a diagnose in which a person has a disturbed image of his or her own body.

From the beginning Jessica Alves, as Rodrigo back then, wanted to become a male version of the Ken doll.

However, her pursuit of the ideal body hasn’t been far from dangerous. In April of 2016, Jessica was hospitalized with necrosis, meaning her skin began to die.

A hole began to appear on the nose at the same time as her septum appeared to come loose. At the same time, she had difficulties breathing and had to visit a hospital in Malaga, Spain.
She received antibiotics through an IV drip every eight hours, the Daily Mail reported.

Doctorn warned that the infection could eat through her nose and into her face. Her face could become gangrenous.

“I can’t breathe through my nose and feel terrible. It has collapsed. I have been given an appointment with a consultant in London in six weeks time and then I’m hoping surgery can be as soon as possible after that,” Jessica Alves said.

Two years ago, she underwent a chemical peel, which involved applying an acid-containing lotion to the face in Spain, Daily Mail reported. Following letting it soak through, she was going to peel off the old skin to reveal the fresh skin in place.

However, it wasn’t a pleasant experience.

“It was fairly painful, and my face looks red now. It feels like burning, she said. Here in Marbella is very sunny and I can’t go out for the next few days unless I have a lot of sun protection.

Jessica made it out of two scary scenarios. But in 2019, following her 11th rhinoplasty. the nose started to collapse. The last surgery was supposed to fix a previous botox procedure.

From Rodrigo to Jessica Alves

“The results of this surgery were very pleasing at first but now I am going to have to have another surgery because it is sinking and I am scared, to be honest,” Jessica told the Daily Mail.

“Each time is riskier than the last and I’m worried that doctors aren’t going to be able to fix my nose permanently.”

Through the years, Jessica has gained plenty of recognition all over the world because of her looks.
People have different opinions of her chancing her body completely, but of course, the most important part is that she feels comfortable and happy.

Already mentioned, Jessica Alves has always felt that she had female tendencies. But it wasn’t until last year, during a photo shoot, that she decided on the transition.

“Within a month I was diagnosed with gender dysmorphic disorder and given the option to start the ­appropriate medication to transition,” she told the NY Post in January. “Before, people looked at me because I looked very androgynous and weird for a man. Now I hope they are looking because they think I am a beautiful woman.”

Jessica was ready. She had her Adam’s apple and six pack removed, and had surgeries including breast enlargement and injections in her knees, hips and feet which cost her around $35 000.
In addition, Jessica also underwent face feminization surgery and female hormones.

In July, speaking on the British show This Morning, she explained she still had a couple of things left.

“I still need two or three surgeries to complete my transition. Then I swear for good, I’m done with plastic surgery,” she said. “There is only so much one can take. Every time I go to surgery, yes it’s scary, but it’s what I have to go through to be the person I am. I have to go through all that.”

The last surgeries required for Jessica – now 37 years of age – to complete her transition is a penile inversion and testicles removed.

‘I love it and everything that comes with it – going to nice hair salons and getting my nails, eyebrows and eyelashes done. Buying dresses and high heels and wearing sexy lingerie,’ Roddy, who now lives in London, she said.

Jessica’s had nose jobs done in Brazil, Colombia, Iran, America and in Istanbul. She’s had trouble breathing through her nose and a couple of weeks ago, she had to have an additional nose surgery.

Several doctors refused to do the surgery, since they just didn’t know what to do. At last, she finally found a doctor in Istanbul who used cartilage from her ear. Now, she can finally breath normal again.

Through her Instagram page, Jessica Alves shares pictures of her transition and life.

It’s safe to say, even though she’s been through a lot, that she looks really happy. And in the. end, that is the most important thing!