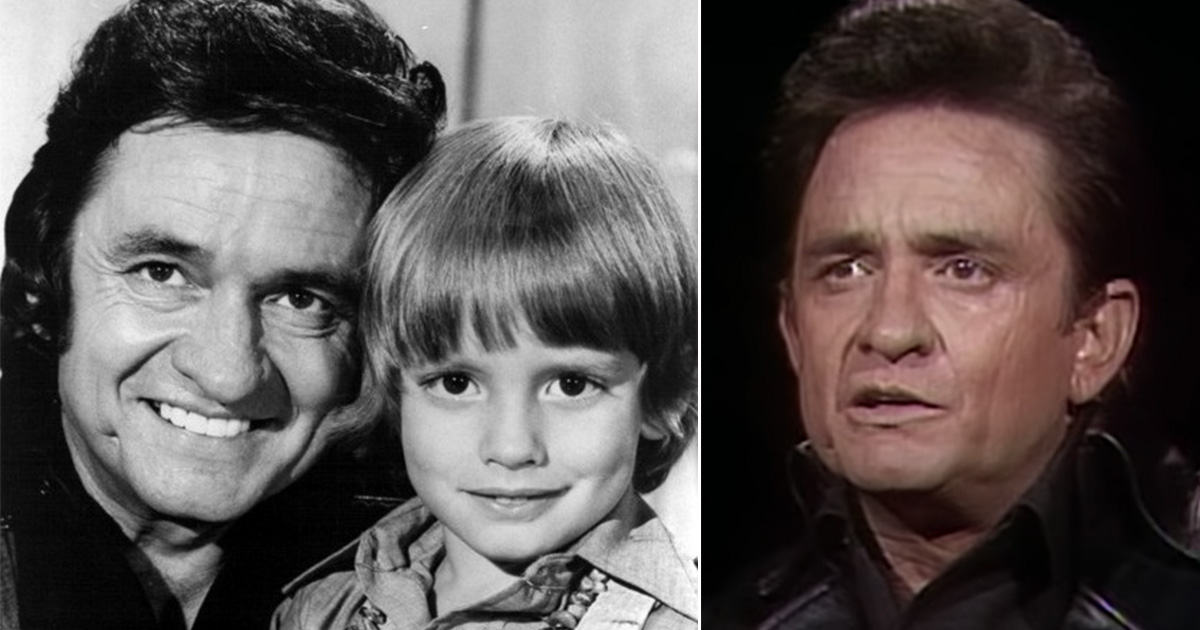 Growing up as a child to famous parents must be tough. Sure, there probably will be money and security and all, but often times these children are assumed to follow in their parents footsteps, doing the same thing and maybe even better.
In the case of John Carter Cash, son of Johnny Cash and June Carter, it probably was the same thing.

However, the now 50 year-old went his own path, bursting out from the shadow of his parents, becoming successful in the music industry.

The name Johnny Cash really don’t need an explanation. The legendary singer and songwriter has grown into an even bigger legend following his passing, and his name has become synonymous with country music.

With songs like Walk The Line, Folsom Prison Blues and Cry, Cry, Cry, “The Man in Black” will forever hold a place in music history, and now, his children are doing their best to keep their fathers legacy alive.

Johnny Cash had five children, and several of them are in the music business. John Carter Cash, the son of Johnny and legendary singer June Carter. went his own path.

He’s pursued a career in music, and has spoken fondly of his beloved father many times, telling the true story of who Johnny Cash really was.

Johnny Cash was born Feb. 26, 1932 in Kingsland, Arkansas. Born J. R Cash, he hwas one of seven children to parents Ray and Carrie Rivers, and moved to Dyess, Arkansas at the age of 3.

His parents were farmers of cotton and other crops. But already at a young age, Cash fell in love with music.
At age 12, he started writing songs and his mother Carrie knew something special was happening.

She saved enough money for him to take singing lessons, and the teacher was stunned by his talents already after a few meetings. However, the teacher told him to stop taking lessons. Instead, he should move on with his natural voice and never deviate from it.

Cash graduated from high school in 1950 and left Dyess. He enlisted in the U.S. Air Force as “John R. Cash” and trained at the Lackland Air Force Base in San Antonio, Texas.

He was stationed in Landsberg, West Germany for four years as a radio intercept officer. And the time Cash spent in Europe would be a very important one for his career.

Together with a few friends, he formed the band named Landsberg Barbarians, playing live gigs, polishing his guitar skills and writing more songs. He bought a guitar for $5 and usually played a mix of blues and country-and-western.

But were they any good?

“We were terrible,” Johnny Cash later said according to The Guardian, “but that Lowenbrau beer will make you feel like you’re great. We’d take our instruments to these honky-tonks and play until they threw us out or a fight started. I wrote Folsom Prison Blues in Germany in 1953.”

“He was a decent singer, not a great one,” wrote Marshall Grant, in his 2006 autobiography, I Was There When it Happened: My Life with Johnny Cash. “But there was power and presence in his voice.”

Cash moved back to the US and tied knot with girlfriend Vivian Liberto, with the couple settling in Memphis. They had four daughters, Rosanne, Kathleen, Cindy and Tara.

In the following years, Cash would move on to play more shows and record music. His older brother Roy introduced him to the Tennessee Three – Luther Perkins and Marshall Grant and AW “Red” Kernodle – and the foursome played both parties and church functions.

In 1955, Cash got to record in Sun Studios in Memphis and recorded Cry, Cry, Cry, which became a huge hit on the radio. It peaked at No. 14 on the Billboard charts.

Also, Cash wrote You’re My Baby for Roy Orbison and Get Rhythm for Elvis Presley.

“The Elvis I knew was a kid full of fun,” Cash said. “He loved his work, loved his music, loved his guitar, loved gospel music and loved his mother.”

Following the first single, Cash wrote “So Doggone Lonesome” and “Folsom Prison Blues.”. In 1956, he would transform into a huge star.
Cash wrote and released the super hit I Walk The Line in 1956, which sky rocketed into first place on the country music charts and sold more than 2 million copies.

The following year, he released his debut album, Johnny Cash with His Hot & Blue Guitar in 1957, including several more hits. In January of 1960, Cash playing the first of his celebrated prison shows at San Quentin.

He was now a huge star, playing over 300 shows a year. He was accompanied by singer June Carter on the road, and soon their professional relationship would soon turn into a personal one. She would co-write Cash’s super hit Ring of Fire (1963).

However, the wild life on the road took out its toll on Cash, who frequently drank and did drugs. In 1966, wife Vivian, who were home taking care of the children, grew tired of her husbands rock ‘n’ roll lifestyle and filed for divorce.

His lifestyle of drugs and alcohol spinned out of control. June helped him get the right treatment for his drug abuse, and in 1968, the two married.

“The Man in Black” was complex, leaving behind a legacy which according to many is bigger than country music itself. Cash was inducted into the Rock and Roll Hall of Fame in 1992.

Now, Johnny Cash’s children are doing their best in keeping the family legacy alive. Several of them are in the music business today. But foremost, June and Johnny’s son John Carter Cash preserves the family legacy and takes care of the heritage of his musical ancestors.

Joh Carter Cash was born March 3, 1970. From a young age, he got to experience the life of a musician and spent plenty of time with his parents on the road. Growing up in their home in Hendersonville, Tennessee country music was always present.

He grew up going to Christian school and grew very fond of books. Today, John Carter himself has a library of over 5,000 books .

Only three years old, John Carter began to realize that his life was different. When Johnny sang Boy Named Sue, he often times would call his son out on stage and introduce him to the audience.

“I would come out and take a bow. I felt the rush of the crowd,” John Carter Cash recalls in an interview with CBN.

Johnny Cash often times took his son on fishing tris, spend time together. Although he was known as ”The Man in Black”, this sort of dark figure with plenty of problems besides making his wonderful music, he was also a family man.

That’s exactly how John Carter experienced his childhood, revealing the true identity who his dad really was.

Johnny Cash said himself; he wanted to be remembered foremost as a good father.

”My dad was full of laughter, full of joy and full of spirit. He would always rather laugh than cry, no matter what anybody else said, that’s the kind of guy he was. He had a great sense of humor and a great love,” John Carter Cash told CBS in 2014. “If I had to say one enduring trait he had, my dad was a very kind man. He was forgiving, he was loving and always gentle. That’s who he was and that’s what remains.”

Being the child of two legends, music was always present. John Carter often listened to his parent’s music, but in his early teenage years, the preferred genre shifted.

He would eventually be greatly involved in the music business, but early on, no matter what he wanted do to, his parents were always supportive.

“I always followed my heart and that was the first thing that I did. They would never have had it any way other than that, John Carter says. “Music was something that was just part of my very being and creativity, in essence. It doesn’t always have to be music. The direction of creativity — it’s what feels right, what’s beautiful.”

He worked together with Johnny Cash on several American albums. American IV: The Man Comes Around (2002) won a Grammy Award for Best Male Country Vocal Performance and also a CMA award for “Album of the Year”.

Several of the albums John Carter worked on were recorded and produced at the Cash Cabin Studio in Hendersonville. He still maintain and operate the studio, having fond memories from working with his dad on several albums.

”I really learned the trade and I learned what not do do as a music producer. I learned when to keep my mouth shut”, Carter told CBS. “It was a real blessing. You didn’t produce Johnny Cash, any producer he worked with will tell you. You let him formulate and do his art, and offer his spirit into the recording. My dad ran the show.”

Through the years, John Carter’s produced albums for artists such as Sheryl Crow, Willie Nelson, Elvis Costello and, Emmylou Harris.

Just like his father, Cash also’s been working in music.
He released his first album Bitter Harvest in 2003 and his second album The Family Secret in 2010, which three starred review in Rolling Stone.

His latest album named We Must Believe In Magic was released in 2010.

John Carter’s also been working as a writer, including several children’s’ books, a novel, a memoir of his relationship with father Johnny and a biography of his mother June.

“I love to create. It’s who I am and what I do. I’m a producer, but I do my own music, he said. “I’ve written children’s books, and my one published novel is a fantasy with talking animals, so it is in my nature. I don’t do it to be a rebel, I just love to create. If there are no rules, then creativity can expand.”

Johnny Cash was famous for promoting artists he liked, no matter what kind of music they performed or what people thought. That’s something John Carter’s learned from his father, and still lives by.

“Dad stood up for the underdog and broke rules and boundaries,” Cash said. “Dad loved people and was very open-hearted.”

The multi-talented artist also can put film director on his resume. He has eight nominations at the 4th Annual International Wild Bunch Film Festival in October for his short-film Dragon Song, for which he also recorded a song with the same name.

In September earlier this year, it was announced that an upcoming album of the late country legend Johnny Cash’s hits together with the Royal Philharmonic Orchestra will be released. It was recorded at the iconic Abbey Road Studios in London.

“I believe my father’s voice remains an orchestra in his own right, John Carter said . His iconic, unique timbre and tone is not shadowed by the surrounding symphonic music, nor is it subdued by it.”

I find it an enticing, welcomed and enduring epilogue to Dad’s life legacy.”

Johnny Cash was a wonderful musician, husband and father, with a musical heritage that will never fade away.