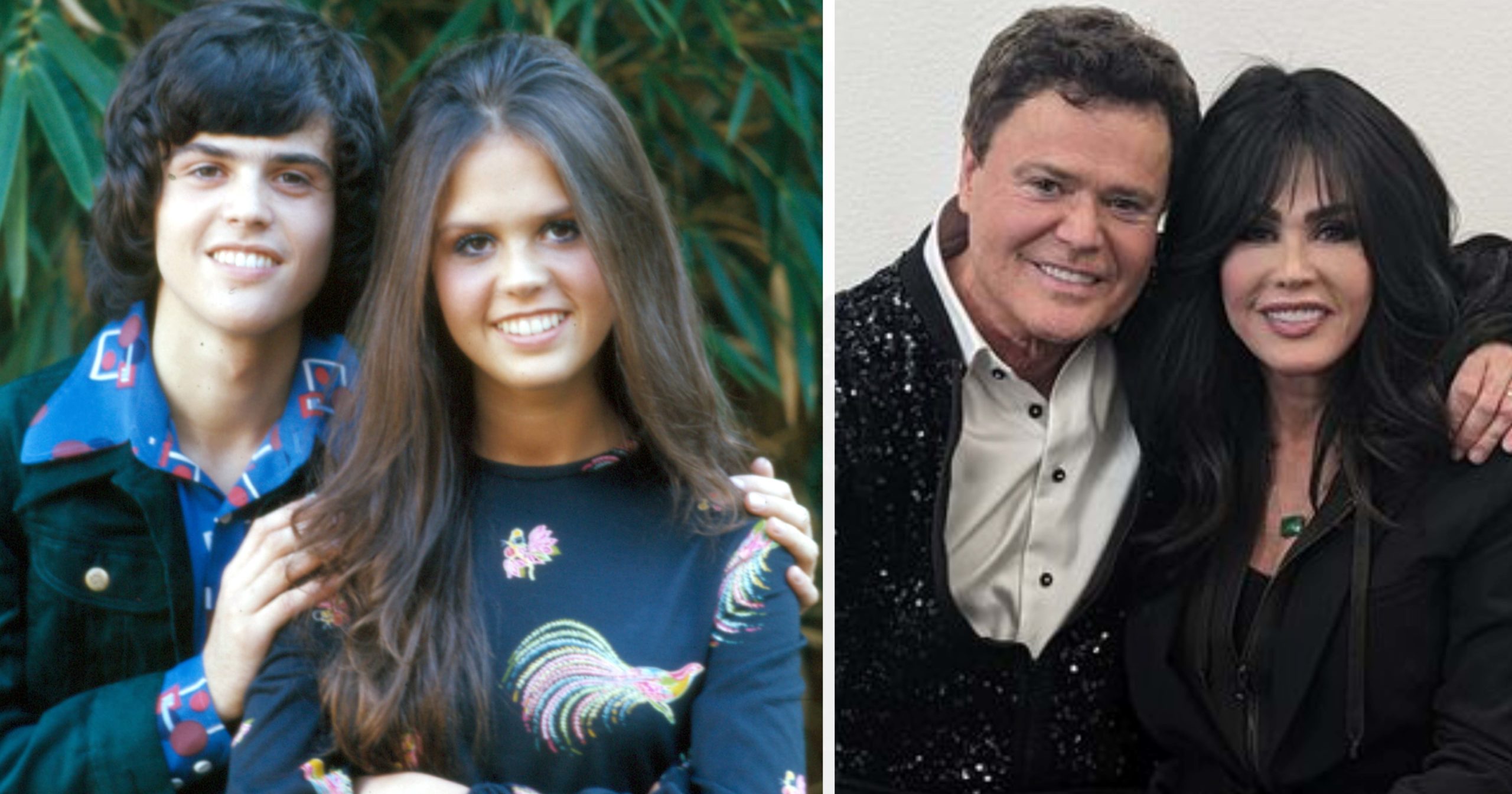 Donny Osmond and his sister Marie Osmond became worldwide superstars when they formed Donny & Marie in the 1970s. The pop duo then became even more famous following their television show, before the siblings split in a bid to embark on their respective solo careers.

Decades later, Donny and Marie reunited in Las Vegas, holding a residency at the Flamingo for years. In 2019, though, they decided to end their run in “Sin City,” with rumors rife that they were having some sort of family feud.

Last weekend, Donny played a show in Las Vegas, performing in front of many fans. During the act, his sister, Marie, made a surprise appearance – and gave new information about their relationship.

Donny and Marie Osmond were just two of several Osmond siblings to crack the music industry. Thanks to their solo careers, as well as parts of The Osmonds and Osmond Brothers, they became major stars.

Donny Osmond was born in Odgen, Utah, on December 9, 1957. Right from the start, he was an entertainer, performing alongside his older siblings as a part of the Osmond Brothers when he was just a young child.

Two years later, Marie Osmond was born. She was the only girl out of nine children, and still at a young age – after her brothers had been a regular acts on The Andy Williams Show – she would be introduced to the world of show business.

Marie’s mother was of the opinion that her only daughter should also pursue a career in music. Donny was, at that point, already a teen star. Before long, Marie would join him on stage.

She signed with the family music label and became a solo artist. At 12 years of age, she went into her first recording session, an experience she recalls as “the most terrifying.”

“It was a full orchestra and rhythm section. I was the only Osmond girl, what if I failed?” she said in 2015, according to Daily Mail.

Donny and Marie’s parents had always dreamed of having a large family, and their home a very religious one. The children grew up surrounded by strict discipline, but there was plenty of music as well. Their parents – Olive and George – were singers, and every Friday night, the whole family got together to sing, play saxophone and talk about world events.

When Donny was three, and Marie one, their family left Utah to pursue an extensive career in show business. The next destination was Hollywood, though the move wasn’t all that great for the young Donny.

“It was kind of a traumatic day for me, he said. “It was kind of fun at first, but then I got homesick for my sandbox, my truck. But it was a new life.”

“I went from an innocent child to a national television star”

At that point, Donny and Marie’s older siblings Alan, Wayne, Merrill, and Jay had become a real attraction, performing as a child group. Then, in 1962, they were recognized by Walt Disney and got a job at Disneyland, performing on the television show Walt Disney’s Wonderful World of Color.

At five years of age, Donny himself entered the world of show business. The Osmond siblings found themselves singing and performing on The Andy Williams Show, and it was there that Donny got his big moment.

“I went from an innocent child to a national television star. My career took on a life of its own,” he explained.

In contrast to her brothers, who mostly made pop music, Marie Osmond focused on country-style music. In 1973, at only 14 years of age, she released her first single, Paper Roses, which would become a huge success.

The song sent her to the top of the top in music. She became the No. 1 US country hit and reached the Top 5 on the Billboard magazine pop chart. Still a teenager, Marie was also a European star, with Paper Roses reaching No. 2 on the UK Singles Chart.

A year later, Marie released her debut album, My Little Corner of the World, which reached the Billboard country Top 40 the same year.

Donny and his siblings performed in front of thousands of fans all over the US and Europe as The Osmonds. However, life on the road was hard on Donny since he was just a little kid. He missed his toys, and he grew homesick and tired.

“It was a life of extremes,” he recalled. “On stage, twenty thousand girls screaming your name and then go to a silence hotel room.”

By 1976, The Osmonds were no longer producing hit singles, but had already released 16 albums.

When Marie became Donny’s duet partner, a new popularity emerged that would catapult the young brother-sister duo to international stardom.

When the siblings started performing together, teenage idol Donny’s face was on almost every newspaper. That in itself took its toll on Donny, who was forced to deal with a tremendous amount of pressure.

“There were times where I had the choice to walking on stage or dying, I would’ve chosen death. It’s that scary,” he said.

“Ever since I started in the business, I knew that someone is looking at me all the time, I had to be perfect.”

Donny and Marie’s initial collaboration resulted in hit singles: “Morning Side of the Mountain” and “I’m Leaving It All Up to You.”

In 1976, the two Osmonds transitioned into television thanks to the rise of the variety show Donny & Marie.

The entertainment show aired on ABC for the first time in 1975 and starred the two siblings singing and co-hosting. It became a country-wide success, with Donny and Marie always ending the show with the classic song May Tomorrow Be a Perfect Day.

Marie joining her brother TV seemed to be a perfectly successful recipe. Yet behind the scenes, Marie was – just like her brother – under immense pressure to look good.

It was all smiles before the camera as the dynamic duo interviewed celebrity guests and performed numerous hits. Still, Marie faced pressure all too familiar to many women in the public eye.

“I had producers take me out into the parking lot when I was 103 pounds and tell me that I was obese, disgusting and a disgrace to my family,” Marie told Closer in 2015. “They said that I needed to keep food out of my fat face.”

While doing the show, Marie also recalled something was wrong with her brother.

“There were times when he was in his dressing room, and he would have really difficult times,” Marie Osmond recalled. “I just thought it was stress. I don’t think he knew [what the problem was].”

Later, Donny would reveal that he struggled with mental health issues during his career. That’s perhaps not so surprising considering the ridiculous level of fame he and his sister lived with.

It even got to the absurd point that his organs became the subject of public interest.

Donny once explained that he was rushed to the hospital in great pain following a show wherein he had developed abdominal pains. Once there, he underwent surgery, but it didn’t take long before he was back on track.

Yet when Donny woke up from surgery, a photographer from a magazine was in the room.

“The photographer said: ‘We need to get some pictures of you, Donny,'” he recalled. “‘Look like you’re in pain.'”

Donny complied, but years later, he reflected on how idiotic it was. He said that he almost lost his life.

“At the time, I did what they needed me to do because I realized millions of girls were going to read Tiger Beat [magazine] and I had to put on a good show. The harder you worked, the bigger star you became. At least that’s what I thought,” Donny explained.

Donny and Marie each went on to have very successful solo careers. Meanwhile, they raised their own families, yet the yearning to one day stand beside each other on stage again clearly never left.

In 2008, the siblings announced their new joint residency at the Flamingo Hotel & Casino in the Las Vegas. The show ran for 11 years, featuring a total of 1,730(!) performances. Sadly, in 2019, Donny and Marie decided it was time to move on.

During their final performance, both Donny and Marie had trouble fighting back the tears as they sang their last song, May Tomorrow Be a Perfect Day,

“During this time I literally got my life back on track,” Marie continued.

“I was a single mom with 8 kids and a lot of baggage – along with their broken hearts to heal. Performing with Donny provided stability for my children by not traveling and for the first time I felt peace. I could be a mom and still do what I loved with someone I trusted, my brother Donny – I love you Donny!”

So why did they even quit the show?

“Why? Why not?” Donny Osmond told ET Online. “There’s so many projects we want to do individually. She’s got her career, I’ve got my career… We had no idea it would be 11 years. We started out as a six-week contract and here we are 11 years later.”

“We are very different people. He loves everything organized and structured, while I like to breathe within the structure of the show. I’m always throwing a curveball at him. He goes crazy and it makes me laugh so I keep doing it,” Marie added.

Yet with the ending of their tenure in Las Vegas, rumors emerged suggesting that the two had been fighting and didn’t want to continue performing together anymore.

“We announced this and the next day they were like, ‘Oh they’re fighting,'” Marie said, adding that just like many brothers and sisters, they have disagreements.

Luckily, the rumored family feud between Marie and Donny was not long-lived. Just days ago, during one of Donny’s shows in Las Vegas, he had a special guest performing: his sister, Marie.

Marie and Donny performed their hit song I’m A Little Bit Country, I’m A Little Bit Rock’ N’ Roll together. Donny posted a photo with his arm around his beloved sister through his Twitter account, with the caption “Together Again.”

He went on: “Words cannot express how great it was to see my sweet sister at my show on Saturday night at Harrah’s Las Vegas.

“During the Request Segment of my show, someone yelled out, ‘Sing I’m A Little Bit Country, I’m A Little Bit Rock & Roll.’ I went out to the booth where Marie was sitting and we sang our theme song once again together.”

Donny concluded: “The crowd went wild. I wish everyone could have seen it. I’ll remember that moment for the rest of my life. Thank you, Sis. I love you.”

Donny Osmond and Marie Osmond will forever hold a special place in our hearts.