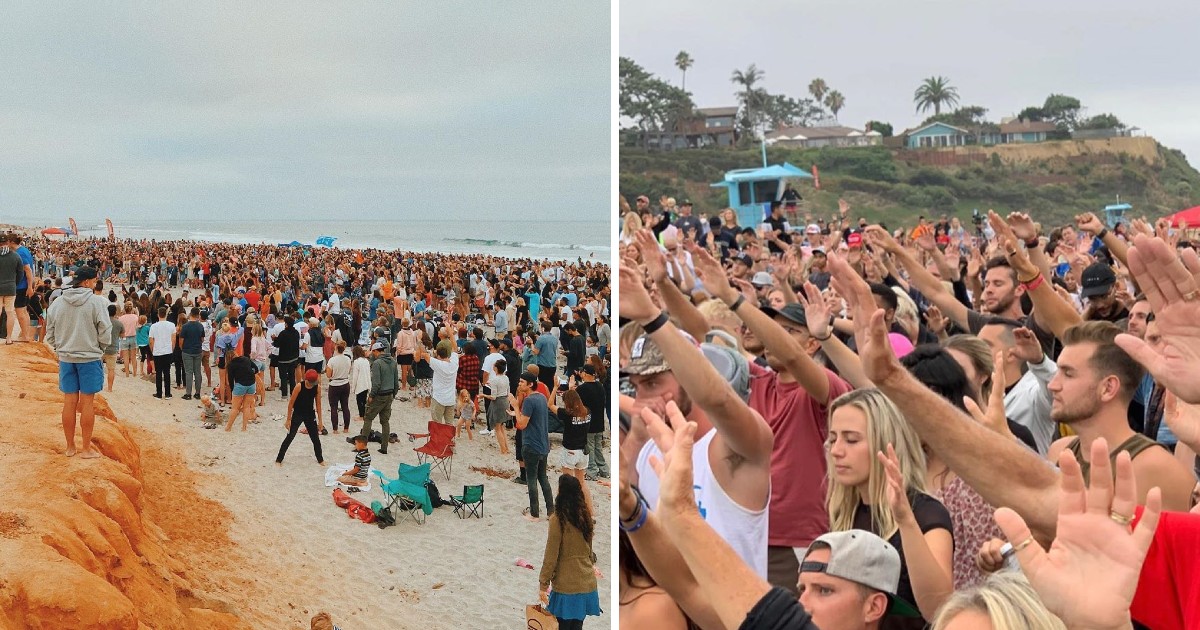 A large crowd of worshippers gathered Sunday in defiance of California’s Governor Newsom’s ban on mass gatherings and restrictions on religious institutions.

The goal of the ban and guidelines is to stop the spread of COVID-19, but many feel it’s infringing on their rights as citizens and have begun defying orders.

On Sunday a large group of people – the organizer said officials informed him 5,000 people were in attendance, but reports suggest only 1,000 showed up – attended an outdoor service.

Hundreds of people were seen in close proximity and very few wore masks. According to Fox News, Sean Feucht, a missionary and one of the organizers of the event, put together the event as part of a protest.

The event, which saw dozens baptized in the Pacific Ocean, was put on by Hold the Line, Feucht’s political engagement movement.

“It’s just the most raw, organic, gritty gospel,” he said. “It’s been very eclectic, very diverse in terms of people praying and singing. People got healed, saved, and delivered.”

His own son Ezra was baptized at the service.

Pastor Barry Sappington, who helped organize the event, said that many people miss their church families and this outdoor event was the perfect place for them to gather.

“Worship is a core part of a Christ follower’s life and as you can see people don’t want to go anywhere, they want to gather, they want to worship and this is a perfect venue for them to do so,” Sappington told NBC San Diego.

“This is not recommended. It really does contribute to others having the potential to be infected regardless of it being outside,” she said.

Despite no social distancing, and very few people wearing a mask, only minor citations were handed out.

Local reports stated that event organizers did not have a permit for the event, and California state parks officials issued several citations for illegal parking, but no other citations or warnings were given.

“It’s such a double standard, right?  You have protesters who can go out, do gatherings like this and nothing is spoken about; if anything, it’s praised,” Heather Molchanoff said. “But then we’re not allowed to gather in church on Sunday.”

What do you think about the gathering? Was it a smart decision?