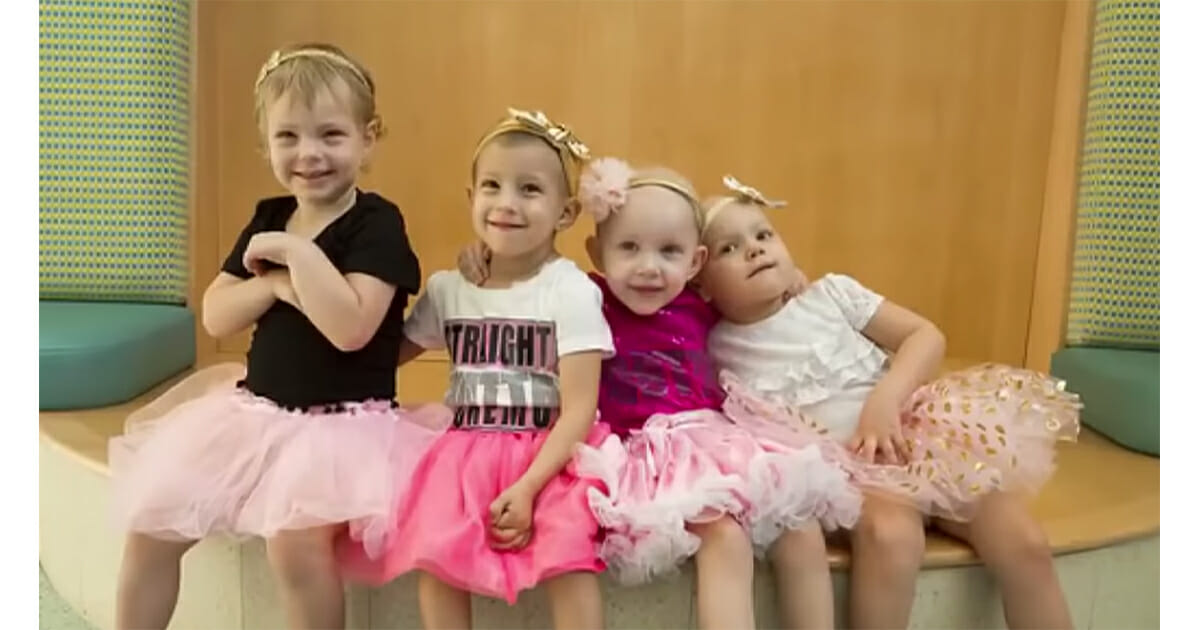 Of all the things that leave us questioning the blunt harshness of this world, cases of childhood cancer are perhaps the most frustrating.

Three years ago, McKinley, Chloe, Ava and Lauren were all in the same Florida hospital whilst they received treatment for cancer.

It was a tough time, with the four relying on one another for support.

Last year, though, the quartet were able to reunite for a photo shoot as survivors.

The girls – all aged between four and five – return to the lobby of Johns Hopkins All Children’s Hospital in St. Petersburg, Florida, for a photo each year.

This occasion marks the first time they’ll all been in remission – which means that all four girls have successfully kicked cancer’s butt!

“They were all on active treatment the first time we did this,” Ava’s mom Alyssa Luciana told FOX13 in St. Petersburg a year ago.

”It’s amazing to see how far they’ve come from being bald little babies.”

McKinley, Ava and Lauren were all suffering from acute lymphoblastic leukemia, whilst Chloe had a rare form of lung cancer. McKinley says they all bonded “because our blood was sick.”

Four girls who all faced cancer together at Johns Hopkins All Children’s Hospital first gathered together for a photo shoot in 2016. Earlier this month, they were all able to don gold "survivor" T-shirts, marking this year as the first since they finished with their treatments. pic.twitter.com/FvSco2OUvn

Shawna Glynn, mom of Lauren, added that she feels the girls forged a connection in hospital because of how the cancer treatment affected their appearances.

The 2018 photoshoot was probably extra special for Lauren, as she’d just completed her very last round of treatments the week before.

“She’s 3 years old and doesn’t have any hair, but all of her friends in the hospital look the same way so it kind of gave her some normalcy,” Glynn said.

The moms meanwhile, also relied on each other during the arduous process.

“Just having other moms to relate to has been phenomenal,” said Karen Moore, McKinley’s mom.

“Just to have other people going through it at the same time as us.”

Of the four, Lauren was the last to complete treatment.

“We’re done,” Glynn said. “She just rang the bell to signify that she has completed her treatment … She’s going into kindergarten on Monday.”

Four young girls who first became friends when they were all being treated for cancer have put on their tutus for a smile-filled reunion in celebration of the end of their treatments at Johns Hopkins All Children's Hospital in St. Petersburg, Florida.

We don’t know about you, but it warms our hearts to look through these pictures. No child should ever have to face cancer, but it’s so special to see that they did so together, with smiles on their faces.

Share this article if you support the fight against cancer!