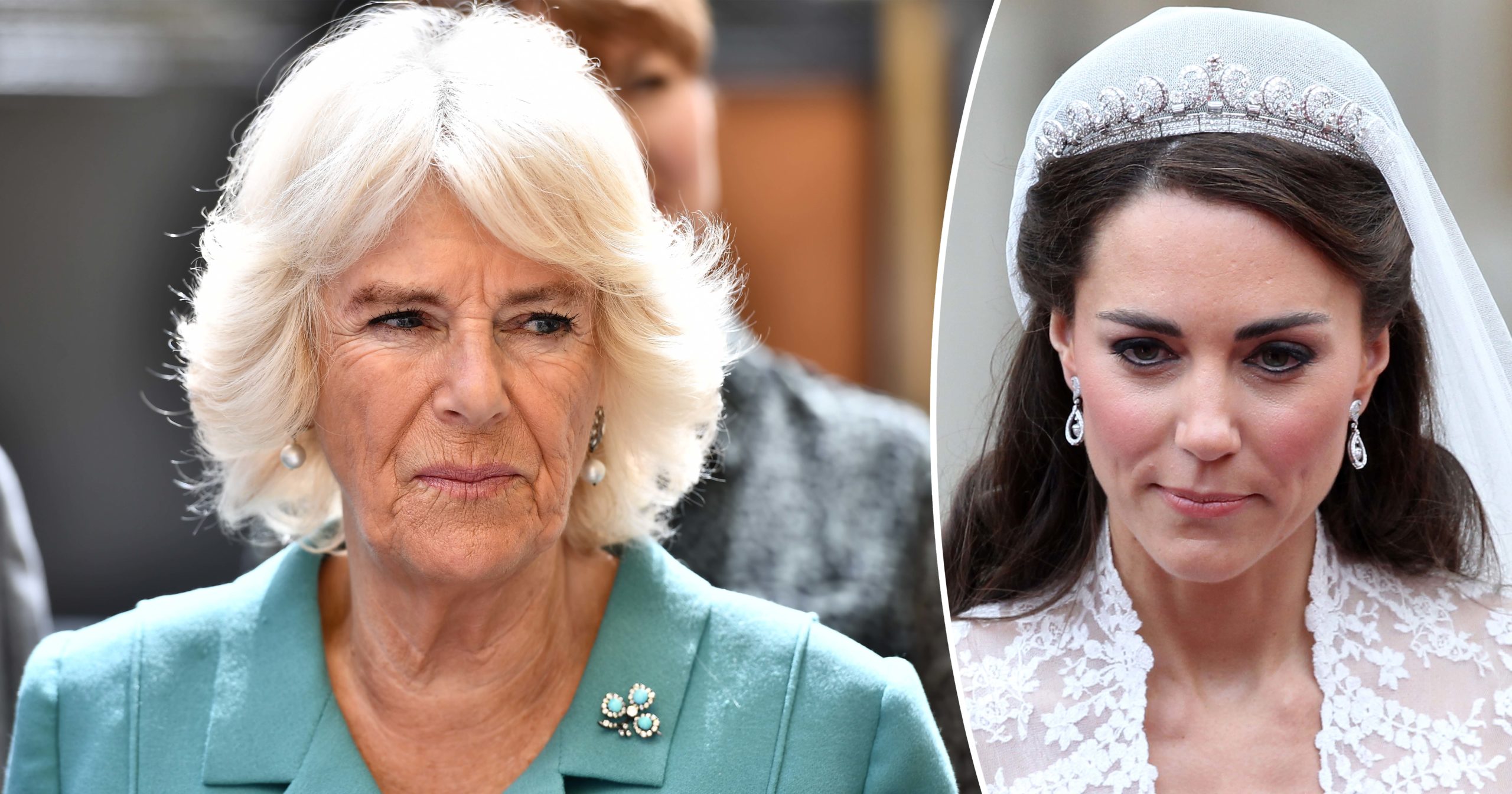 Kate Middleton has been a part of the British Royal Family for many years now. In fact, it’s hard to believe that she and Prince William married all the way back in 2011.

It’s hardly a secret that their relationship had its ups and downs prior to their union. In 2006, the couple broke up, and reports that followed revealed some not-so-nice things about William. Kate reportedly felt that he had cheapened her image, though Kate herself reportedly had her own detractors within the Royal Family.

Prince William and Kate Middleton first met while studying at the University of St. Andrews in Scotland. The two became good friends at first, before love took over.

The two started dating, and in 2006, she made her first royal appearance as William’s girlfriend.

Being a member of the Royal Family must be a wonderful thing. Life itself seems pretty easy with all the money, nice houses, and fancy dinners. However – as we have seen in history, for example, with Princess Diana – it can also be very tough. Especially considering the British tabloid press, which can be really harsh once they find someone to stalk.

And for Kate Middleton, this was also the case, as she became a subject of intense media fascination all over the country. After all, she was dating a future king. But at the same time, of course, that’s no excuse for the media to dig deep into her private life.

She was only 19 when she and William started dating, but that didn’t matter to the tabloids.

Coming from a middle-class background – her parents made millions through their company – Kate was labeled “a commoner.”

Before the couple announced their engagement in 2010, Kate was nicknamed “Waity Katie” and “Lazy Katie.” According to Buckingham Palace officials, it was a reference to the fact that Middleton had recently quit her job to “prepare for her future life.”

One can only imagine what it’s like to prepare for a life as a royal. So it’s no understatement to say that there probably exists no more extensive change in lifestyle – and publicity– in the world. But Kate Middleton managed, thanks to the help of “The Firm” and her then-fiancée, William.

Kate was given cruel nicknames

According to royal expert Richard Fitzwilliams, William made sure to – in private – help Kate prepare for life as a royal.

“It was very sensible in the circumstances for Kate and William to get to know each other over the length of time that they felt appropriate. But it can be hurtful seeing those headlines and obviously very stressful,” he said.

Even so, the paparazzi gave Kate cruel nicknames and dug deep in her family tree to try and find nasty things to write about her.

The most significant outrage of invading the Princess’ privacy came to light in 2013. The former royal editor of the scandalous tabloid News of the World, Clive Goodman, revealed that he had hacked Kate Middleton’s phone 155 times, beginning during the 2005 Christmas holidays.

Goodman hacked her voicemails on Christmas Eve and Christmas Day and added that he had also hacked the phones of Prince William 35 times and Prince Harry nine times.

On April 29, 2011, William and Kate Middleton tied the knot at Westminster Abbey in London. But years earlier, in 2007, it seemed like the love story had ended – it was even reported that William and Kate had split for good.

William was stationed with the Household Cavalry in Dorset at the time, while Kate was living in London. As a result, they often spent time apart.

“We did split up for a bit,” William admitted in their engagement interview. “But that was just, we were both very young, it was at university, we were both finding ourselves and such, and being different characters and such.”

“I think I at the time wasn’t very happy about it, but actually it made me a stronger person,” Kate added.

“You find out things about yourself that maybe you hadn’t realized. Or I think you can get quite consumed by a relationship when you’re younger. I really valued that time for me as well although I didn’t think it at the time, looking back on it.”

But some of the reports painted a picture of the split as inappropriate.

Royal correspondents Laura Collins, Katie Nicholl, and Ian Gallagher claimed Prince William decided to split from Kate because he felt the “fun” had disappeared from the relationship.

Moreover, Kate was said to have been left “desperately upset,” as she had already pictured how they were to be married in the future.

Shortly after the breakup, William was spotted roaming around London nightclubs and seeing several other girls.

“Kate had had enough”

Kate, naturally, took umbrage to this. According to reports, “harsh words” were exchanged as Kate thought she had been “humiliated” by William’s behavior.

“It was the first such warning she had dished out over the course of their four-and-a-half-year-relationship,” the report reads, as quoted by Express.

“Kate had had enough, and words were exchanged. Kate told William that he was making her look bad, one of her friends explained. She has coped for years with girls flinging themselves at her boyfriend, and for a while, she found it humorous and even flattering.”

Following their breakup, things got better between Kate and William. Today, of course, we all know their love story had a happy ending. The future King and Queen have been married for more than ten years and have welcomed three children Prince George, Princess Charlotte, and Prince Louis.

But despite William and Kate getting back together and moving on to marry, things could’ve taken a whole different turn. According to royal expert Christopher Anderson, author of William and Kate: A Royal Love Story, Camilla played a meaningful role in their split.

In an interview with The Daily Beast, Anderson explained that William’s stepmother, Camilla, may well have been a driving factor behind the breakup.

“I was in London when the breakup [of William and Kate] occurred. I was shocked, completely stunned, everyone thought it was only a matter of time before William was going to ask Kate to marry him. And then people started telling me that Camilla was behind it,” Anderson said in 2016.

Moreover, Anderson added that the reason why Camilla could have objected to have her stepson dating Kate is because she was “a bit of a snob.”

“She’s an aristocrat, she has always been moving in Royal circles. She had always thought of herself as the heiress to Alice Keppel, her great-grandmother, who was the mistress of Edward VII.”

Anderson also described how Camilla was proud of her royal connection, due to which she felt it was meant to be that she was part of the “royal circle.” Coincidentally she, like Alice Keppel, became the mistress to the future King, Charles.

Camilla deamed her “not worthy”

“She did not look at Kate as someone who was worthy of joining the Royal Family. Kate is the first working-class woman to be accepted into the Royal Family. She is descended from coal miners and her mother was a flight attendant.”

Andersson added: “So for all those reasons, Camilla never really felt that Kate Middleton as an individual and the Middleton family as a whole were going to be worthy of entering into the Royal Family. I was told at the time of the breakup, and later on as well, that Camilla basically whispered in Charles’s ear that it was really time to make — to force — William to make a decision one way or the other.”

“It has been since confirmed publicly that Charles did suggest to William that he either make a commitment to Kate or basically set her free, as it were. Now, his motives for doing that may have been pure but Camilla’s…not so much. She was the instigator of this.”

William and Kate both graduated in 2005. According to royal expert and biographer Katie Nicholl, their early relationship problems had already begun by that point.

In a piece in Vanity Fair, Nichol wrote that William later sat down with his father, Charles, and the Queen to speak about his future with Kate. The author claimed that William was supposed to spend New Year’s Eve with Kate and her family, but changed his plans at the last minute.

Both Charles and Queen Elizabeth advised William to take his time and not rush his decision regarding he and Kate’s future.

As we know today, things turned out just fine, not only between Kate and William, but also between her and Camilla.