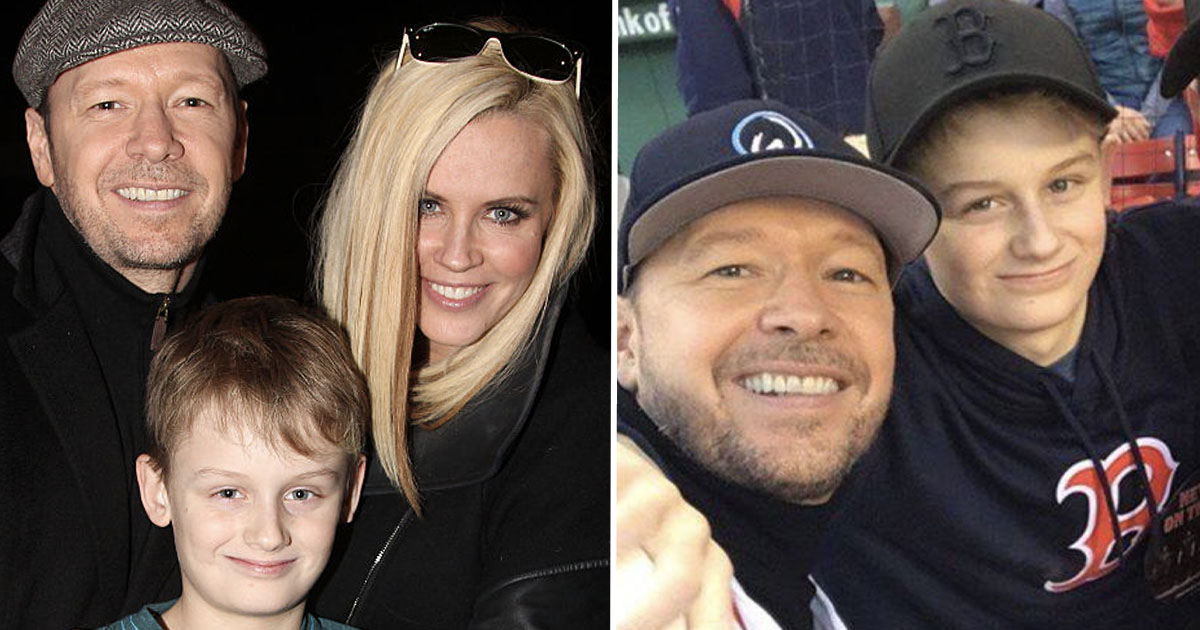 Donnie Wahlberg got a second chance at love and life. And by the sound of it, he seems to be doing a really good job! He has a loving wife and children who adore him!

His life has had a lot of ups and downs which brought him to what his current situation is like.

Donnie Wahlberg’s last name might sound very familiar to you because he is related to one of Hollywood’s top actors Mark Wahlberg. But his brother is not the only actor in the family, Donnie has carved out a successful career for himself as an actor and musician in the industry.

As for his personal life, Donnie has encountered some heartbreak. He married Kim Fey after five years of knowing one another. Unfortunately, the marriage did not last. The couple filed for divorce in 2008, both citing irreconcilable differences as the reason.

The couple shares two children together named Xavier and Elijah. Their mother has primary custody but Donnie Wahlberg retains visitation rights. By all accounts, the couple is on good terms with one another and has perfected the art of co-parenting their children.

For years, Donnie was single till he met actress and television personality, Jenny McCarthy. The couple has been married for over 8 years but it took them a long time and a lot of heartbreak to find one another.

Before Jenny married Donnie, she had been married to director, John Asher. She met the director on the set of the movie “Diamonds” in 1999, and the couple got married in the same year. Soon after their marriage, they welcomed their son Evan.

They were married for 6 years before Jenny McCarthy filed for divorce in 2005 citing irreconcilable differences. Jenny details the decline of her marriage in her book, “Louder than Words: A Mother’s Journey in Healing Autism.”

It was in the same year, 2005, that her son was diagnosed with autism. The diagnosis while it shocked her, did not upset her or make her feel any differently towards her son in the very least.

She did not let his diagnosis upset her in any way and continued to work and focus on her son by taking him to specialists and programs at UCLA.

She admits that her son’s diagnosis did have an impact on her relationship with her husband. Saying in an interview, “John was starting to get angry at me because he felt ignored. The only fantasies I wanted to imagine were Evan being able to say, ‘I love you, mommy.’ I didn’t care if I never had sex again.”

The couple decided that it should be Asher who moves out of the family home. While the actress resided there with her son and managed his care and medical bills independently.

But soon after, she met comedic legend Jim Carrey and quickly fell in love. Carrey was very involved with her son and loved Jenny immensely. The actor famously hired a helicopter to display a loving message for his girlfriend on Valentine’s Day.

Fans loved the pair and were rooting for them. So when the couple announced their break-up in 2010, fans were understandably upset. McCarthy said publicly that the relationship stopped being fun and naturally came to an end as a result.

When Donnie Wahlberg met Jennie McCarthy, the pair of them already had a lot in common. They had both married in 1999 for the first time and had children they shared with their exes.

Donnie first met Jenny in 2012 and was absolutely smitten with her from the very first meeting. But it was not until a year later when he met the actress on the “Jenny McCarthy Show,” that he decided to make a move and ask her out.

After dating for a couple of years, the actor decided to propose to his girlfriend. He involved Jenny’s autistic son Evan in the proposal as well which showed how close of a bond the duo share with one another.

She recounted the proposal in an interview saying, “This weekend I was sitting with Donnie … and he went into the other room and out came Evan with a card that said ‘Will’ and he handed it to me.”

She went on, “Then Evan ran away, and Evan came in with a card that said ‘You.’… I just started crying, and then Evan came back into the room with the word ‘Marry’ — but spelled wrong.”

She understood by then that it was a proposal and screamed “YES” out loud. At this, Evan quipped in with, “I have another dad,” and the trio shared a tender moment with one another.

The couple married in Chicago at the St. Charles, Ill. Evan was in every part of the wedding celebration, even walking his mother down the aisle. As they became man and wife, Donnie also became a step-dad to Evan.

The couple shares a close and loving bond with one another. On one occasion, Donnie said about his wife,  “Besides being the best wife that I could have ever imagined having, she’s also the best stepmom and mother. She’s a great partner, and to simplify it, having someone to build traditions with my children and it being Jenny is probably the thing I’m most grateful for.”

The couple has been renewing their vows every year. This, according to them, helps them keep the spark in their relationship alive.

Evan and Donnie share a beautiful bond. In 2019, Donnie gave his wife the greatest Christmas present ever. She said, “One Christmas, early on, Donnie handed me one of the greatest gifts ever, which was…that he was taking care of Evan’s college tuition.”

The blended family is immensely close and has a lot of love for one another. The “Band of Brothers” actor did not have a hard time connecting with Evan as he was already a father to two boys. And as for Jenny, she is close to Donnie’s sons from his previous marriage as well.

While the couple has been married for a while, they do not have any children they share together biologically. In 2017, they revealed this decision was because they wanted to relax and enjoy their golden years.

Now that Evan has grown up, his father has a role in his life again. Asher admits he handled his son’s diagnosis badly and needed to do better as a father.

He now shares a lovely relationship with his son. He even directed a movie inspired by his son called “A Boy Called Po,” which he encourages everyone to watch.

He said on an occasion, “I didn’t make the movie to make money. I made the movie to educate people more than anything. So, really, for me, I just want people to see it, and I don’t care how they see it. I just want them to see it.”

Asher is still unmarried but he shares a strong bond with his son now. It is a beautiful relationship they share.

What a beautiful blended family. We wish them all well.

Share how this blended family loves one another so deeply and inspire them!