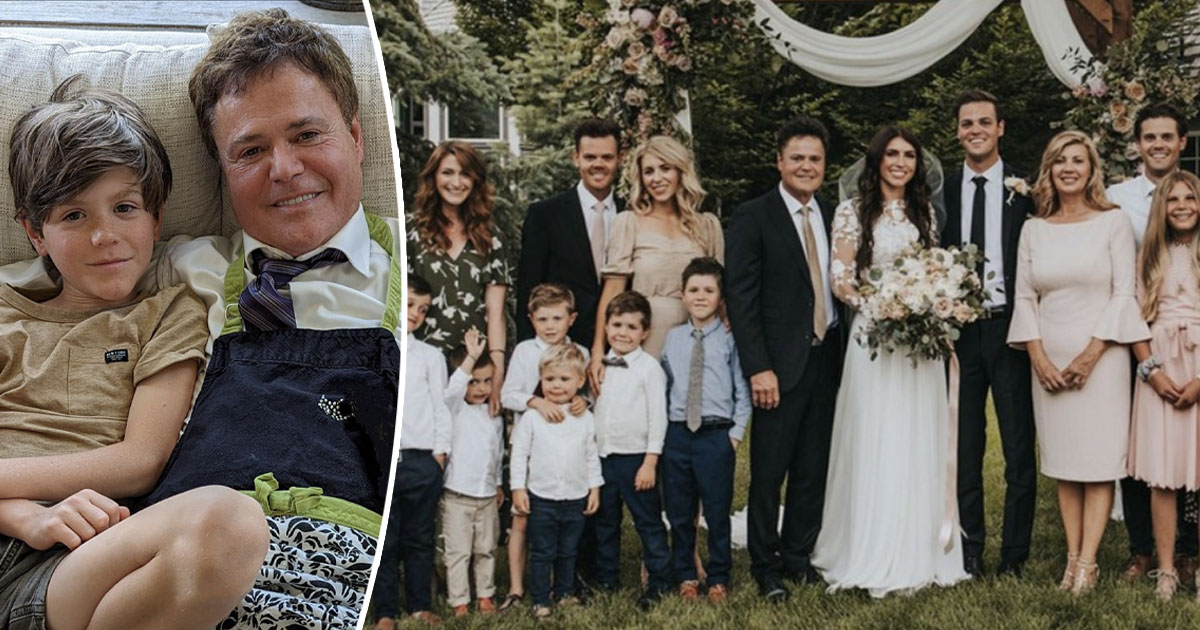 Donny Osmond is a beloved entertainer who has essentially grown up in the public’s eye. The singer and actor still has a very busy schedule wherein he is constantly performing or committed to a project.

But no matter how busy his schedule is, he always makes sure that he has time set aside for his family.

Donny Osmond has five sons, Don, Jeremy, Brandon, Christopher, and Joshua. All of them are now adults with families of their own. And there is nothing Osmond loves more than spending time with his brood.

Osmond now boasts 12 grandchildren, all of whom he is very proud of. His eldest son Don has four kids with his wife Jessica. Jeremy has three children with Melissa, Brandon and his wife Shelby also have four kids, and Christopher has one baby with his wife Alta.

Osmond’s youngest son Joshua tied the knot in June 2020. According to a report, the couple wants a few kids but have decided to enjoy a few years just on their own before they embark on starting a family.

Donny Osmond first became a grandpa in 2005, when his son Jeremy welcome his baby boy Dylan with his wife Melissa.

This was the first addition of a new generation of Osmonds. As Osmond has grown older, he has made strides in both his personal and professional lives. The singer started his Las Vegas residency in 2010 and took his final bow there on his 62nd birthday.

He expressed his happiness on Instagram, talking about how it was a relief that instead of worrying about performing on his birthday, he was able to spend time with his family instead.

In 2012, Osmond appeared on “The Talk” for a ‘Father’s Day Special’, and his eldest son Don made a surprise appearance alongside him to deliver some wonderful news.

Don revealed to his father that he was about to become a dad himself. He also told his dad that he relished the fact that it was him who was able to “break him into fatherhood” as his oldest child.

He continued his message by adding,  “I wasn’t the first to make you a grandfather, but Jessica and I have your fifth grandbaby.” It was later reported that Donny Osmond burst out into tears backstage, the singer shared the reason for his emotional reaction, “They’ve been trying for a long, long, long time, I’m very happy for them and I’m pretty happy myself too!”

Since 2012, Don and his wife have overcome their fertility issues, and in 2020 Donny happily announced that his eldest boy had welcomed his fourth child!

The singer wrote on his Instagram, “We officially have a dozen! Debbie and I are so excited that our 12th grand baby was born two weeks ago. Don and Jessi welcomed Christian, their 4th son, on Tuesday, December 29, 2020 and we are already in love.”

Despite being a booked and busy personality, Donny Osmond always makes sure to make time for his grandchildren. He is a proud grandpa who is always ready to post about his grandbabies’ achievements on his social media accounts.

Osmond made time from his busy schedule to fly out and see his grandson play a football match. His grandson’s team had won, a fact Osmond shared proudly, adding that his grandson would soon be starting high school!

Another time he posted about going to see his grandson’s basketball game before he went on to Las Vegas to continue his residency. Clearly, he is a very involved grandfather!

Apart from sportsmen, one of his grandchildren is also an artist. One of Osmond’s grandsons had his art work displayed at the National Museum of History in Washington, DC. The proud grandfather shared the achievement on his Twitter account.

For a long time, there was only one granddaughter in the brood who Osmond referred to as his “little sweet princess.” He once wrote the sweetest birthday wish to her, saying, “She has the most lovable personality and always makes sure that everyone has a friend. I’m so lucky to have this little girl in my life. In fact, I often refer to her as my sweet little princess.”

So when Osmond found out his son Christoper was adding another little girl to the family, he was beyond excited. He shared his reaction to the gender reveal on social media.

In the video, Osmond is barely able to contain his excitement as he rushes toward is his daughter-in-law with open arms, shouting his granddaughter Emy’s name to show how happy he was that she will finally have another girl in the family to bond with!

I absolutely adore Donny Osmond and seeing his family life makes me so happy! Sending this family all our best wishes so they may flourish even more.

Share this piece with others so that everyone can know about Donny’s full life as a grandpa.