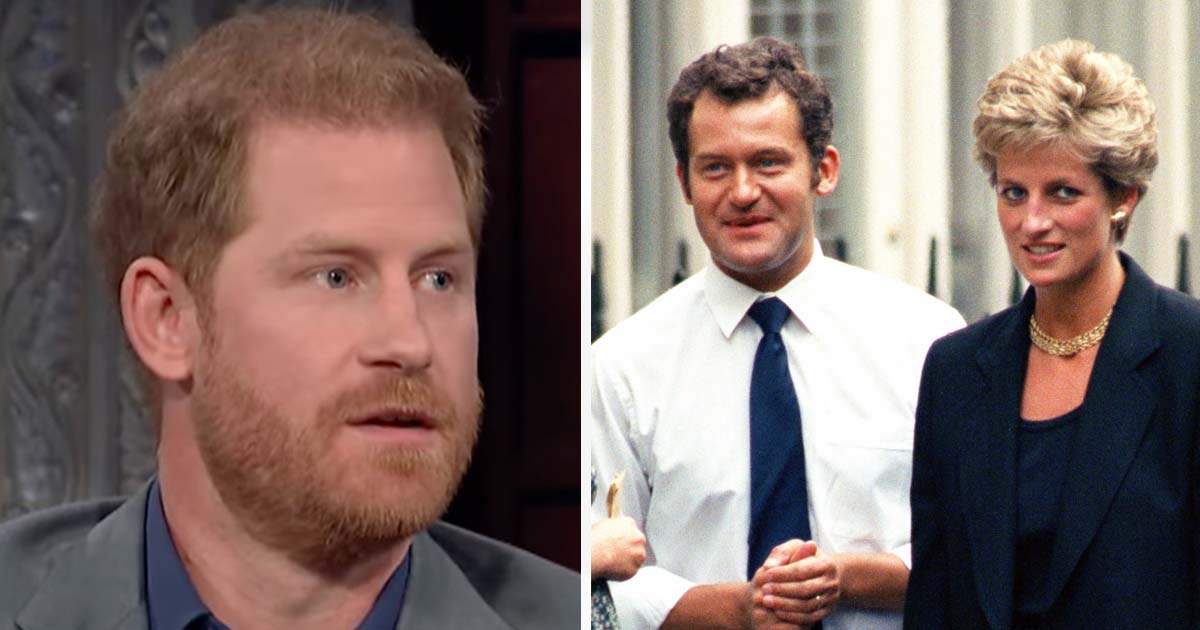 Prince Harry’s book Spare landed in stores worldwide on Tuesday, and it seems as though the former royal’s sales are doing pretty well.

Harry’s tell-all memoir explores many subjects, and includes criticism of his brother, Prince William, stepmother, Camilla, his father, now-King Charles, and his sister-in-law, Kate Middleton. He also wrote extensively about his mother, Princess Diana, and her butler, Paul Burrell.

Diana and Paul were famously close, and pretty much became best friends. Over the years, Burrell has spoken out several times about his relationship with the late princess, revealing private letters from her and offering his opinion on various royal subjects.

Yet in Spare, Harry slammed Burrell, saying the former butler has ulterior motives for talking about Diana. In Harry’s opinion, it’s not because he wants to be famous, but rather because he wants money.

It’s been a hectic week for Prince Harry. At the weekend, two brand new interviews – one with 60 Minutes and one with ITV – aired in countries worldwide. Then, on Tuesday, his long-awaited tell-all book Spare was released.

Harry is reportedly netting about $20 million for the book deal. Just two days after its release, it certainly seems like interest is high.

As reported by Express, Spare is on its way to setting a new record as the fastest-selling non-fiction book ever, according to his publisher Penguin Random House. The book sold 400,000 copies on the first day alone across physical, e-book, and audio formats.

On the UK Amazon site, Harry’s memoir is already the top-selling publication and is expected to be the biggest seller of 2023.

Naturally, though, despite the fact that Harry’s book has been highly anticipated, not everyone is excited about what he has to say. The Express report that the Prince’s interview with ITV on Sunday had around 4.1 million viewers. At the same time, the BBC aired the drama Happy Valley, which had about 5.3 million viewers.

While the interview might not have been the most watched program in the UK, interest in other parts of the world was more extensive.

The ITV interview has aired in 77 territories worldwide, including Australia, New Zealand, Canada, and Brazil.

In his book, Harry offers a new side to his feelings about royal life – the life he left after more than 30 years to being anew in the US with his wife, Meghan Markle, and their children, Archie and Lilibet.

Of course, Harry younger years were forever scarred when he lost his mother, Princess Diana, in a car crash.

Over the years, Harry has spoken about his beloved mother many times. In the HBO documentary Diana, Our Mother: Her Life and Legacy, he recalled the last phone call he ever had with his mother, on the same day she tragically passed away.

“I can’t really necessarily remember what I said, but all I do remember is probably regretting for the rest of my life, how short that call was,” Harry said.

Princess Diana was loved by people all over the world. Sadly, she was hounded by the British tabloids, who paid ridiculous amounts of money for pictures of her.

While the inner royal circle was tight-knit, Diana found another great friend in her butler, Paul Burrell. He began working for Charles and Diana at Highgrove House in 1987, and stayed with the princess until her passing in 1997. He once claimed Diana told him he was the “only man” she trusted.

Harry accuses Diana’s butler of “milking” her death for money

While Harry and William didn’t have a bad relationship with Burrell, things changed when Harry, at 19, worked as an unpaid farmhand in Australia.

As mentioned, Burrell has been very outspoken about his life within the royal sphere and his friendship with Diana. But in 2003, his relationship with her children came crashing down.

In his 2003 book, A Royal Duty, Burrell published several private revelations which left Harry furious. He and his brother even released a statement accusing Burrell of “a cold and overt betrayal.”

Paul responded by suggesting a meeting with Harry and William to justify his book. Moreover, he wanted to tell them more about the side of their mother’s life that they had not witnessed.

From that day on, Harry and Paul were at odds with one another. In Spare, Harry lashed out at his mother’s former butler, saying he was “milking” his mother’s death for money. Harry said that the release of A Royal Duty “made his blood boil.”

Harry recalled that at the time, he had received word via a package from the Palace warning him of the “delicate matter.”

“Mummy’s former butler had penned a tell-all which actually told nothing. It was merely one man’s self-justifying, self-centering version of events. My mother once called this butler a dear friend and trusted him implicitly. We did too. Now this,” Harry said.

“It made my blood boil”

“He was milking her disappearance for money. It made my blood boil.”

Furthermore, Harry explained that he wanted to fly back to Britain to immediately “confront” Paul Burrell. But his father and brother talked him out of it.

The Prince also claimed that he had “nothing to do with the drafting” regarding the statement that the Palace issued in response to Burrell’s suggestion of a meeting, adding that he would have gone “much further.”

“He wanted to give us a piece of his mind?” Harry said.

“I didn’t know why, I presume the Palace quashed it. I told myself: Shame, I thought of that man as the one errant steer that got away that summer.”

It didn’t take long for Burrell to respond to the claims made in Harry’s book. In a video, speaking from his home in Florida, the former butler said Harry has “changed fundamentally” and that his mother would be “appalled.”

“I first met him in his mummy’s tummy. I don’t recognize the young man I see today. That’s not the boy I knew,” Burrell said.

“What I see now is an angry, petulant, privileged prince who is constantly blaming other people and not taking accountability on his part.”

He added: “[Diana] would be angry at these personal, vindictive revelations which don’t just undermine Harry, but his country, his family, the institution – which his mother was very proud of – and his late grandmother’s legacy.”

Harry recalls moment he found out about Diana’s passing

In his book, Harry went on to reveal the moment he got word of his mother’s passing. He revealed his father had sat beside his bed, saying, “Darling boy, Mummy’s been in a car crash.

“There were complications. Mummy was quite badly injured and taken to hospital, darling boy,” Harry recalled his father saying. “He always called me ‘darling boy,’ but he was saying it quite a lot now. His voice was soft. He was in shock, it seemed.”

“With a head injury. They tried, darling boy. I’m afraid she didn’t make it.”

The prince further revealed that Charles just put his hand on his knee, saying, “It’s going to be OK,” but that he “didn’t hug” him.

Harry added: “Everyone knows where they were and what they were doing the night my mother died.”

“I cried once, at the burial, and you know I go into detail about how strange it was and how actually there was some guilt that I felt and I think William felt as well, by walking around the outside of Kensington Palace.”

As mentioned, Burrell has spoken about his life as Diana’s butler several times. Not long ago, he also took a stand regarding Harry and Meghan’s marriage.

Burrell claimed that the two work together well because Meghan resembles Princess Diana.

“Harry went for and married Meghan because she’s like Diana. [They are] both women who would always stand up for what they believe in and wouldn’t be pushovers,” he said.

Though Burrell argues that Diana and Meghan are very similar, it doesn’t necessarily mean they’d be best friends if Diana were still alive.

“I think, possibly, they would have clashed,” he said.

Burrell argued that Meghan might have had an easier time than Diana, mostly because she was already a celebrity and in the spotlight. According to him, that allowed her a better grasp of the media as she headed into the royal sphere.

“I think the main difference between them is that Meghan has a game plan, whereas Diana was young and naïve,” Burrell said.

“Diana did the book with Andrew Morton and courted the press over the years because she didn’t have a voice. And her strong-mindedness meant she cared and she felt the people of the country had a right to know what had gone on behind closed doors.”

Prince Harry was about to turn 14 when Diana passed away in Paris. He and William had to walk behind her coffin as she was laid to rest, a decision they criticized later on in life.

With her passing, the brothers were left without a loving mother who always raised them like normal children. Instead, they got a stepmother in Camilla, and Harry also used Spare to accuse her of leaking royal stories to the press.

Moreover, Harry revealed that he and his brother, Prince William, had asked their father, King Charles, not to marry Camilla. However, in the end, they changed their minds.

“We didn’t think it was necessary, we thought that it was gonna cause more harm than good and that if he was now with his person. That – surely that’s enough,” Harry told 60 Minutes. “We wanted him to be happy. And we saw how happy he was with her.”

Harry added that Camilla was “dangerous” as she had been cast as a “villain” by the British media because she had a part in Charles and Diana’s collapsed marriage.

“That made her dangerous because of the connections that she was forging within the British press. And there was open willingness on both sides to trade of information. And with a family built on hierarchy, and with her, on the way to being Queen Consort, there was gonna be people or bodies left in the street because of that,” Harry said.