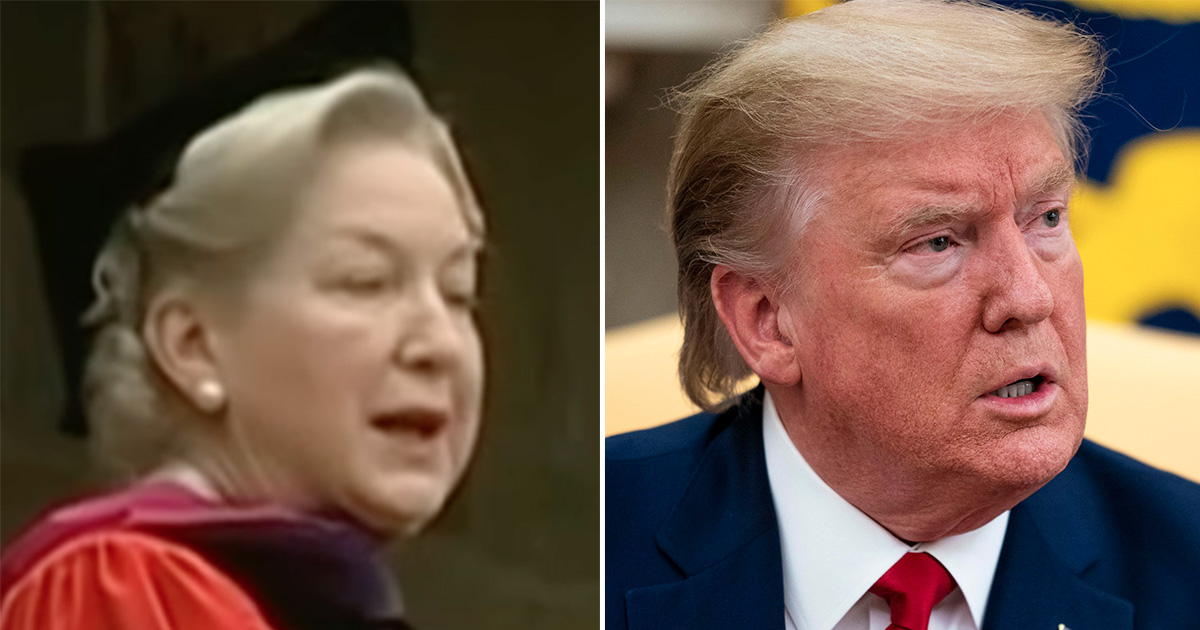 Maryanne Trump Barry has accomplished a lot during her career, just like her younger brother Donald Trump.

But at the same time, as the Trump family stands together, she’s also heavily criticized him during his presidency. In a secret recording, Barry was heard saying ugly things about her brother.

So who is Maryanne Trump Barry? And what’s her career been like? This is all you need to know!

Donald Trump was the one getting the biggest piece of his father’s real estate empire. Construction business in Manhattan made him one of the most powerful people in the business.

Trump also got the most prestigious and powerful job in the world when elected US president. But he’s actually not the only on in the Trump family who pursued a career in politics.

Donald Trump’s older sister Maryanne Trump Barry did the same, but a couple of years ago, she slammed her younger brother for being dishonest and having “no principles.”

It was revealed in these secret recordings, which was a pretty big deal.

So who is Maryanne Trump Barry? And what’s her career been like? This is all you need to know!

During Donald Trump’s four years in office, we’ve gotten to know pretty much his entire family. Many of his children – for example Ivanka, Eric, and Donald Trump Jr. – have played a big part in his administration. Also, his youngest son Barron Trump lived in the White House, however he was almost never seen in public.

Over the years, we’ve also learned pretty much everything about Donald Trump’s father Fred Trump, who came to New York as an immigrant from Germany and laid the ground work for the Trump real estate empire.

The former president also has four siblings, some who have chosen a different career path in life.

Maryanne Trump Barry was born April 5, 1937 and grew up in Queens’ Jamaica Estates neighborhood with the rest of her family. Barry went to school at Mount Holyoke College for her undergraduate degree and later earned her master’s in public law and government from Columbia University in 1962.

At this point, she could’ve chosen to go into her father’s real estate business, but her youngest brother Donald was leading the way, and that was pretty much the reason why she didn’t want to join the family business.

She worked for her father, Fred, for a number of summers, but she was doing – as she says – “woman’s work,” decorating lobbies.

Speaking with New York Mag in 2002, Maryanne said she wanted to avoid any sibling rivalry and therefore skipped working alongside her brother Donald.

“I knew better even as a child than to even attempt to compete with Donald,” she said. “I wouldn’t have been able to win. He was building models when he was very young. Huge buildings.”

Donald Trump added, “I think we’re both lucky she didn’t want to. We’d have been butting heads.”

Worked as a lawyer

In 1960, Maryanne married first husband David William Desmond. The couple had a son, David Desmond, named after his father.

At this point in time, there weren’t many woman in the field of law. However, she was committed to changing things, so when her son David started 6th grade, she decided to go back to school.

She earned her law degree from Hofstra University in 1974, and shortly afterwards, Barry got her first job with the U.S Attorney’s Office in New Jersey.

In 1982, she married her second husband, lawyer John J. Barry.

Following her first job in the Attorney’s Office, Barry was appointed as a Federal Judge in 1983 to the District Court of New Jersey by President Ronald Reagan. She worked in the position until 1999, when President Bill Clinton appointed her to the U.S Court of Appeals for the Third Circuit.

While Trump’s and Barry’s careers haven’t crossed paths, she’s stood by her brother through hard times.

It was said, according to the New York Times – that Trump asked his lawyer, Roy Cohn, to lobby a White House aide on her behalf in the 1980s.

“There’s no question Donald helped me get on the bench,” she revealed in the book The Trumps: Three Generations That Built an Empire. “I was good, but not that good.”

However, she’s not been shy of stating her opinions even though it meant being the opposite to the former president’s – her brother’s – agenda. According to WNYC, Barry has taken positions viewed as supporting abortion rights and has also expressed pro-immigrant views.

“Neither of my parents had English as a first language,” she said, according to WNYC.

“My father’s father died when he was a teenager, and dad went to work to support his mother and two siblings as a carpenter and as a builder’s mule, hauling carts of lumber to construction sites when it was too icey for the mules to climb the hills.”

Donald Trump and his sister seemed to have a great relationship throughout the years, and maybe Barry not going into the family business was a big reason for their relationship.

In 1996, when she was in the hospital after surgery, she described how her younger brother did all he could to help her.

“Donald came to the hospital every single day. Once would have been enough – the duty call,” she told New York Mag. “That’s how love shows, when you go that extra yard. Last year, on his birthday, I had a little dinner at my apartment. I cooked. No maids, I don’t have a maid. And Donald said afterward, ‘That was just like Mom made!’ That was what I was waiting for. Just like Mom made.”

“She’s never told me that before, so I’m very, very….,” Donald replied.

“Well, my praise is sparing as the older sister”, Maryanne said.

However, when Donald Trump became the president of the United States, things sounded differently. And it was a secret recording that would show what Maryanne really felt.

The recordings – recorded in 2018 and 2019 – were published by The Washington Post and included Barry criticizing his brother’s character.

She described her younger brother as a “cruel” man with “no principles.”

“All he wants to do is appeal to his base,” Barry said in one of the recordings. “He has no principles. None. None. And his base, I mean my God, if you were a religious person, you want to help people. Not do this.”

“His g——- tweet and lying, oh my God,” Barry added. “I’m talking too freely, but you know. The change of stories. The lack of preparation. The lying. Holy s—.”

In another recording published by The Post, Barry claimed she worked to help get Trump into college.

She said she did his homework for him, which she also stated in her book Too Much and Never Enough: How My Family Created the World’s Most Dangerous Man.

“He got into University of Pennsylvania because he had somebody take the exams,” Maryanne Trump Barry said in the recording.  “SATs or whatever. That’s what I believe.”

The White House rejected the allegations, saying that she only was motivated by “her own financial self-interest.”

Maryanne Trump Barry sure went her own path in life, and we think that was a really brave thing to do.