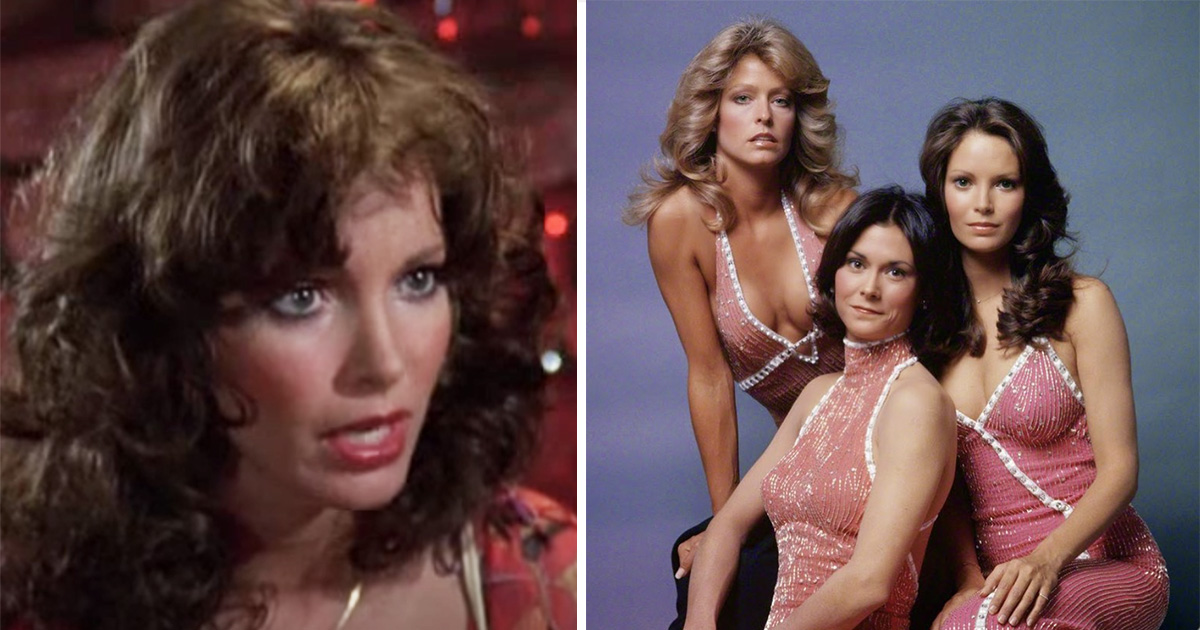 Jaclyn Smith became a pioneering celebrity in the 1970’s, starring in the classic TV series Charlie’s Angels. Through the years, the Houston native has also gone on to become a successful business woman and a role model for millions.

Jaclyn may no longer be in her heyday as Kelly Garrett (who captured imaginations all over the world in the 1970’s) but she’s certainly still an inspiring and interesting woman.

Jaclyn has been in show business for over 40 years. The award-winning actress and entrepreneur has been in the public eye for several decades all told, and one thing really stands out.

Unlike many Hollywood celebrities, Smith always stayed true to her compassionate roots; loving her family and helping people all around the world through several foundations.

Jaclyn had a fantastic career and was also blessed with a beautiful family heralding both children and grandchildren. This is her today, aged 76.

Jaclyn Smith was born Jacquelyn Ellen Smith on Oct 26, 1945 in Houston, Texas. As a small child of just three she got her first pair of dancing shoes and set about pursuing her dream of becoming a professional ballerina.

For Jaclyn, family has always been the number one priority, something instilled in her as a youngster.

“Growing up in Houston, home was always a happy refuge for me and the values my parents instilled in me, although I may not have known it at the time, would help me define myself later in life. Family was and continues to be the foundation for all my happiness and success,” she told Medium.

Jaclyn graduated high school and later moved on to study drama at Trinity University. Before long, she was starring in several productions, including West Side Story, and Gentlemen Prefer Blondes.

Having made it to the stage, Jaclyn still dreamt of becoming a dancer. In 1973, she landed her first TV job, getting a gig as a shampoo model for Breck. Soon, her face was known all over the country.

She worked together with Max Factor, which later on would land her her own signature scent, Jaclyn Smith’s California, launched in 1989.

But before Jaclyn would proudly present her own fragrance, many things would happen. Following her college graduation, she decided to move to New York City. It would turn out to be a great call.

“It was there, a thousand miles away from home, that I was lucky enough to try a lot of different experiences, meet many wonderful people, learn my craft, hone my skills and really be open to finding a path that was right for me”, she explained.

“While I started in dance, I was pulled into acting in commercials and miniseries and just loved it. As I began to take on more roles and explore new and exciting characters, the more I knew this was what I wanted and am grateful for a wonderful career on the big and small screens.”

Jaclyn landed several smaller parts in TV series and movies in the early 1970’s, including Switch and McCloud.

She would later be known as the “Queen of Mini-Series”, but it was in 1976 that everything changed for her, when she got the role of Kelly Garrett in Charlie’s Angels.

While reading for the part, the young actress wasn’t sure she would get it.

She wasn’t really feeling the readings, and, following the casting, she was sure she’d missed out on the job.

“I just know it wasn’t my best moment. So I just got it out of my mind. I didn’t even think there was a chance for me to get Charlie’s Angels,” she said.

“I wasn’t a driving, ambitious actress like, ‘I have to get this role.’ I just went in, I had fun.”

At first, it looked like the producer wanted someone other than Jaclyn, since they were originally looking for a redhead to balance the blond Farrah Fawcett-Majors and brunette Kate Jackson. But when casting was over, producers realized that Smith would be perfect, since the chemistry between the three actresses in the leading roles was so good.

Charlie’s Angels aired for the first time in 1976. And it didn’t take long before it was a certified success.

The show was initially pretty controversial, with plenty of bikinis on screen being broadcasted straight into the homes of millions of Americans. However, that wasn’t anything Jaclyn thought of at the time.

‘The feminists didn’t like us because they said we were Barbie dolls prancing around. We wore pretty things, but we didn’t flaunt our sexuality. It wasn’t salacious,” she said. “But I didn’t feel exploited. I would have walked away if I felt that. In my heart of hearts, I knew who I was.”

Jaclyn started on the show earning $5,000 an episode, according to IMDB. By the time she left, she was making almost $40,000 per episode, with the Angels also being involved in merchandising spin-offs that generated even more money.

“They did lunch kits and hair accessories, and we were part of the design of our dolls,” she explained.

Jaclyn was onboard for the entirety of the show’s journey, and her captivating performance lead to many further opportunities.

In 1981, the same year Charlie’s Angels stopped airing, she portrayed the First Lady in Jacqueline Bouvier Kennedy, which was critically acclaimed and turned out to be one of the most highly-rated television films in history. It was through this role that Jaclyn earned a Golden Globe nomination for her portrayal of the legendary first lady.

It was also around this time that she started to be known as “The Queen of Mini-Series”, with Jaclyn starring in critically praised mini-series such as Rage of Angels, George Washington, The Bourne Identity and Family Album.

Jaclyn’s favorite role, however, was the one of the title character in the TV movie Florence Nightingale (1985).

Critics didn’t like it, but Jaclyn loved it, despite the fact she had plenty of other projects to focus on simultaneously.

She started her own collection of women’s apparel and accessories which sold at Kmart. They, too, delivered huge success. Jaclyn had become an icon and role model for many women, both in the show business industry and in the public, which developed her brand bit by bit.

In 1981, Jaclyn Smith tied knot with cinematographer Anthony B. Richmond. They welcomed son Gaston Richmond the following year, and, in 1985, daughter Spencer Margaret Richmond was born.

In 1989, Jaclyn divorced Anthony B. Richmond. A couple of years later, she decided to move to the Holmby Hills of Los Angeles with her two children. Jaclyn, who loves old houses, bought a six-bedroom, six-bath Georgian Colonial mansion. After her success with Charlie’s Angels, she was finally able to buy herself a new home, but it needed some fixing up.

“I love the 18th Century, but I also love comfort, so our upholstery pieces are modern—pieces that you can sink into,” Jaclyn told People in 2014.

Jaclyn’s home is located in the wealthiest urban neighborhood in the United States – stars like Frank Sinatra, Barbra Streisand, and Bing Cosby have all had houses in the area.

”It’s a great family home with a lot of sunlight coming through the windows,” she says, “and it’s surrounded by a lot of land,” she said.

The mansion houses a tennis court where Jaclyn’s son Gaston used to play and there is also a beautiful pool where Stephanie used to hang out. In addition to that, there is office space for Jaclyn and her new husband, heart surgeon Dr. Brad Allen.

“The kitchen was the only room that really needed to be renovated,” said Allen. “But she redid every room in the house.”

Today, Jaclyn has installed some new furniture and placed a dollhouse in her garden for the grandchildren. She often posts pictures of her garden and her roses on her Instagram – obviously, she has a green thumb!

These days, Jaclyn Smith is 76 years of age, but her family keeps her young at heart. She says her family is her “rhyme and reason of everything”, which comes from a great upbringing with incredible parents and an equally important grandfather.

“It makes you work harder. It makes you appreciate everything more. Balance also keeps me young at heart,” Jaclyn Smith says. “My work is something that’s really mine. And I think it fulfills me and makes me a whole human being. Certainly doing the Spencer baby collection with my daughter, who designed it, with three generations coming together—I’m about all of that.”

Not only does Smith have the blessing of wonderful children and a fantastic husband in Brad Allen, whom she’s been married to since 1997, but she’s now a grandparent herself.

In 2016, she welcomed her first grandchild, Bea, born of her daughter Spencer. Then, last year, her son Gaston welcomed his first child into the world – and Jaclyn’s second grandchild – Olivia Rose.

In August of 2019, Jaclyn was featured as one of People Magazine’s “Glam-mas” (glamorous grandmas). Through Instagram, she shares many pictures of her lovely family.

Love for her family

And just as Jaclyn Smith loves having her family close, it really looks like her children Spencer and Gaston, as well as her grandchildren, love spending time together.

“They visit me all the time,” Smith said. “This house is open to them. Bea knows that there’s a drawer in my closet that’s filled with candy, and she goes right for the gummy bears. She knows that I’m a soft touch for candy.

“I mean, Bea is an explorer. She has her little playhouse in the back, and we have tea parties and go out. But Bea is good with unstructured time, too, and entertaining herself. So we go out in the yard and we talk about the flowers. Olivia is just so little.”

Not only that, but the closing of the Charlie’s Angels series in the 1970’s wasn’t the end of the classic characters. Smith was uncredited in the 2003 movie Charlie’s Angels: Full Throttle. Last year, she once again played Kelly Garrett in the newest movie.

Sure, it wasn’t as big of a success as in the 1970’s, but in the future, she hopes to watch her iconic role as Kelly Garrett together with her grandchildren.

In the future, Smith says she can’t wait to revisit her iconic role watching it with her family. And they don’t call her grandma, but “Mimi”.

“My kids never really watched it that much,” she says. “In fact, if they saw me on film, they’d go, ‘Oh, there’s Jaclyn Smith,’ they wouldn’t say, ‘There’s Mom.’ I bet I’ll have fun watching it with Bea and Olivia. That might be fun to say, ‘Hey, here’s your Mimi a long time ago.’ I’d like them to see how things change, and I think it’s important for them to see their history, to see where they came from.”

Back in 2003, Jaclyn Smith was diagnosed with breast cancer. Fortunately, she caught it at stage 1 and she underwent successful treatments including surgery and several rounds of radiation therapy.

She made it through, and at 76 years of age, she certainly looks amazing!

Through the years, she’s devoted her time to several foundations. Jaclyn holds The Breast Cancer Research Foundation, American Heart Association and The John Wayne Cancer Institute among others close to her heart.

She’s also devoted to AbilityFirst, for which she serves as an AbilityFirst Honorary Chair, holding fundraises and acting as a spokesperson at numerous events.

“Just surround yourself with loved ones, support, girlfriends,” Smith said of her cancer treatment.

“And educate yourself the right way, not on the internet. Forget it. Get the recommendations from your doctor and from somebody who’s experienced these things.”

Jaclyn Smith has had a wonderful career and we’re so happy to see her enjoying life together with her children and grandchildren.

Please, share this story with you friends and family if you love Jaclyn Smith!