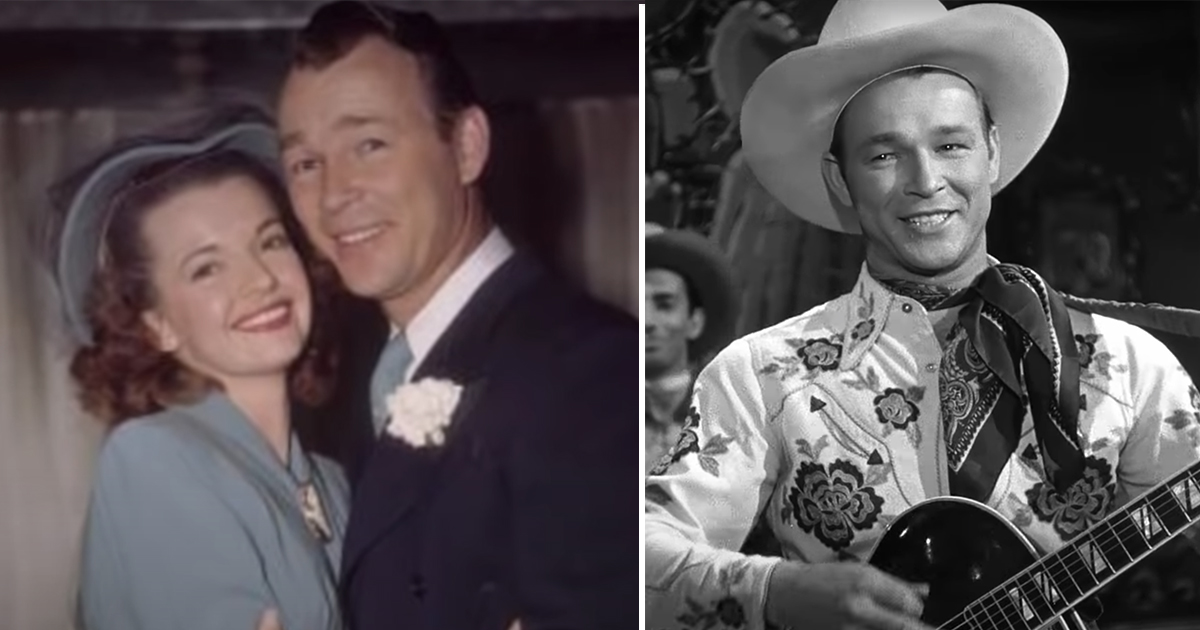 Roy Rogers starred in almost 200 movies and TV series combined over the course of his career. The “King of the Cowboys”, as he would come to be known, passed away in 1998, aged 86, but his legacy will forever be remembered.

This is the story of Roy Rogers – and how his love of lemon cream pie led him to his first wife.

Roy Rogers, born Leonard Slye, was born Nov 5, 1911 in Cincinnati, Ohio. He was raised on his family’s farm in Duck Run, Ohio and proved himself an animal lover as a child.

At the age of 12, Rogers won a 4H competition at a County Fair in Scioto, Ohio, with his pet pig Evangeline. That would take him to Columbus, the state capital, and for the first time ever he got to see a big city.

“That was the first time I had ever been ten miles off the farm,” he said. “I had never even seen an elevator before. I spent the whole first day just riding up and down the elevator in the Old Neil House Hotel.”

Roy Rogers grew up in the middle of the Great Depression. It was a harsh period for millions of Americans, and jobs were difficult to come by. At the same time as he was studying in McDermott, Ohio, he had dreams of becoming a physician or a dentist. However, he left school before graduating so he could work in a shoe factory, all to help support his family.

Music was ever present during his childhood. Early on, he learned to play the mandolin and also called square dances. Then, everything would change one hot summer’s day in 1930.

During a trip to California, where the family was going to visit one of Roy’s sisters, the family saw an opportunity. The warm weather and hope of a better future with more jobs made his family move to Los Angeles, though it didn’t turn out to be the big American dream the family thought it would be.

Jobs were still hard to get, and Roy did his fair share to support the family, both by driving a gravel truck and working as a fruit picker.

At the same time, Roy had learned how to play the guitar. His true passion was his desire to entertain others – and he continued to sing and play for years to come.

Since he was a talented musician, his sister thought he should appear on a local radio show where amateurs had a change to get 15 Minutes of Fame. He tried out, and before long, Roy was asked to join a country band called The Rocky Mountaineers, both as a singer and a guitarist.

Over the course of two years, Roy sang with a variety of country music groups, but in 1933, he wanted to do something else. It was then that he formed the group The Pioneer Trio, consisting of himself, Tim Spencer and Bob Nolan. They began writing songs and soon ended up touring as well, becoming popular nationwide.

Speaking to David Letterman, Rogers recalled one gig in New Mexico which led to something truly special.

It was at that time he met his first wife, Lucille Ascolese, all because of a pie.

“In 1931 or 1932 you didn’t think of yourself as anybody. You were just worried about getting enough to eat,” Rogers explained.

“We got to Roswell, New Mexico in 1933 and we didn’t have any money, we went to this little motel and were playing at the local theater. We went on the local radio station and asked the man if he had a little .22 or something, we liked to hunt and I didn’t like telling him that we were hungry.”

Roy and his band mates often kidded with people about what they liked to eat, and at one point, people started getting them things like fried chicken. Roy liked lemon cream pies, and one day he got a call about singing A Swiss Yodel. He was to be paid in … that’s right, two big lemon meringue pies.

Rogers sang like never before. Later that evening, a young lady and her mother came over to the motel to deliver the pies.

“It was two of the most beautiful lemon meringue pies. We couldn’t wait for them to leave so we could eat those things. The young lady that brought the pies over turned out to be my first wife”.

Local radio station KFWB in Los Angeles, California, liked the group so much that they even got their own program.

Roy Rogers and his band members soon started to grow in notoriety. They first landed a series of radio transcriptions, and later signed with the legendary record label Decca.

The group’s music was perfect for many films at the time. Soon, The Pioneer Trio could be seen singing in several movies during 1935 and 1936, and that in turn lead to Roy becoming an actor as well.

Today, we all know that acting was going to change Roger’s life. But at the time, he just needed work. And boy was he good at it!

Roy Rogers starred alongside Gene Autry in The Big Show (1936), as well as The Old Coral (1936). Fittingly enough, Autry was called “America’s Favorite Singing Cowboy”. Rogers later became “The King of the Cowboys” and, of course, he married “The Queen of the West”, Dale Evans.

Autry and Rogers became great friends, and their paths would cross several times throughout the years. Following the deaths of Roy and Dale, the Autry National Center even acquired archives of them, containing key artefacts representing their careers in show business that spanned more than 50 years.

But let’s get back to 1937. It was actually Gene Autry that helped Roy Rogers get his first major roles, without even knowing. Rogers had heard that Republic Pictures was looking for a new singing cowboy, and he got an addition. It was at this time that he changed his name from Leonard Slye to Roy Rogers.

When Autry cancelled his own contract, Rogers got his big chance. He landed a role in Under Western Stars, which was an enormous success, leading to him becoming a major western star overnight, rising to the top of the box office in just five years.

“The King of the Cowboys”

In 1944, Dale Evans starred alongside Rogers in Cowboy and the Senorita, and the chemistry between the two was highly praised and noticed by fans, the studio and themselves. Rogers’ first wife sadly passed away in 1946, just weeks after the birth of their third child.

A year later, he married Evans and they soon started to work more frequently together, starring on their own NBC network TV series, which quickly became a household favorite on Sunday nights.

The marriage was a shock, not least for Roy’s daughter Cheryl Rogers.

“It wasn’t until after they got married that he brought her home and said: ‘this is your new mother’,” she recalled in an interview with Closer Weekly in 2018.

“I didn’t think I needed a new mother, so I really gave her a bad time, but she was a saint.”

Through their show, Rogers also slowly transitioned from movies into television. In the 1950s he had his own show, The Roy Rogers Show, which aired for more than 100 episodes.

Not only did he star alongside his wife, but also on his beloved horse, the golden palomino stallion, Trigger. Trigger ended up becoming almost as big of a star as Rogers himself.

“He was without a doubt the greatest horse that ever came along,” Rogers said. “I got him when I made my first picture, he was four years old. I made my first picture with him in January 1938. He was like an iron horse, it there’s a heaven for horses, that’s where Trigger is. He was something else, he could do anything.”

The Roy Rogers Show aired on CBS in the 1960s as well, and in addition, 67 of his feature films were released to television. It attracted a new generation of fans, and “The King of Cowboys” grew even bigger. According to Ohio History Central, Rogers received a staggering 78,852 fan letters in one single month.

In February of 1960, Rogers was honored with three stars on the Hollywood Walk of Fame. One for Motion Pictures, one for television and one for radio.

Dale Evans and Roy Rogers remained married for the rest of their lives. They had one natural daughter together but raised several adopted children, three of whom had been adopted by Roy during his previous marriage.

However, the celebrity couple also endured a huge tragedy. Their daughter Robin was born with Down Syndrome, and passed away after only a few years.

In 1964, 12 years following the passing of Robin, Roy went through another tragedy. Another daughter, Deborah, passed away following a car accident.

“Without their bond, neither Roy nor Dale would’ve survived the death of their kids,” Jane Stern, co-writer of their biography Happy Trails, says.

Roy would later turn into a business man, opening up his own fast-food restaurants called Roy Rogers Restaurants. Even though he and his wife Dale had been huge celebrities for decades, they always treated fans like family, signing autographs and responding to fan mail, his son Roy “Dusty” Rogers Jr recalled.

Roy Rogers sang himself into the hearts of millions throughout his entire life. He was the hero in hundreds of the movies and TV productions he starred in. And that was something the next generation of young cowboys could surely relate to.

Roy Rogers – cause of death

In 1998, 60 years after his first film, he passed away aged 86 in his home in Apple Valley, near Victorville, California. The cause of death was congestive heart failure. As per reports, the legendary cowboy singer had his wife Dale Evans, as well as other family members, at his side. Son “Dusty” Rogers Jr recalled the last thing his father did.

“What a blessing to have shared my life together with him for almost 51 years. To say I will miss him is a gross understatement. He was truly the king of the cowboys in my life,” his wife Dale Evans said in a statement. She passed away three years later, aged 88, also of congestive heart failure.

Roy Rogers sure was “The King of the Cowboys”. He is truly missed by many – gone, but never forgotten.