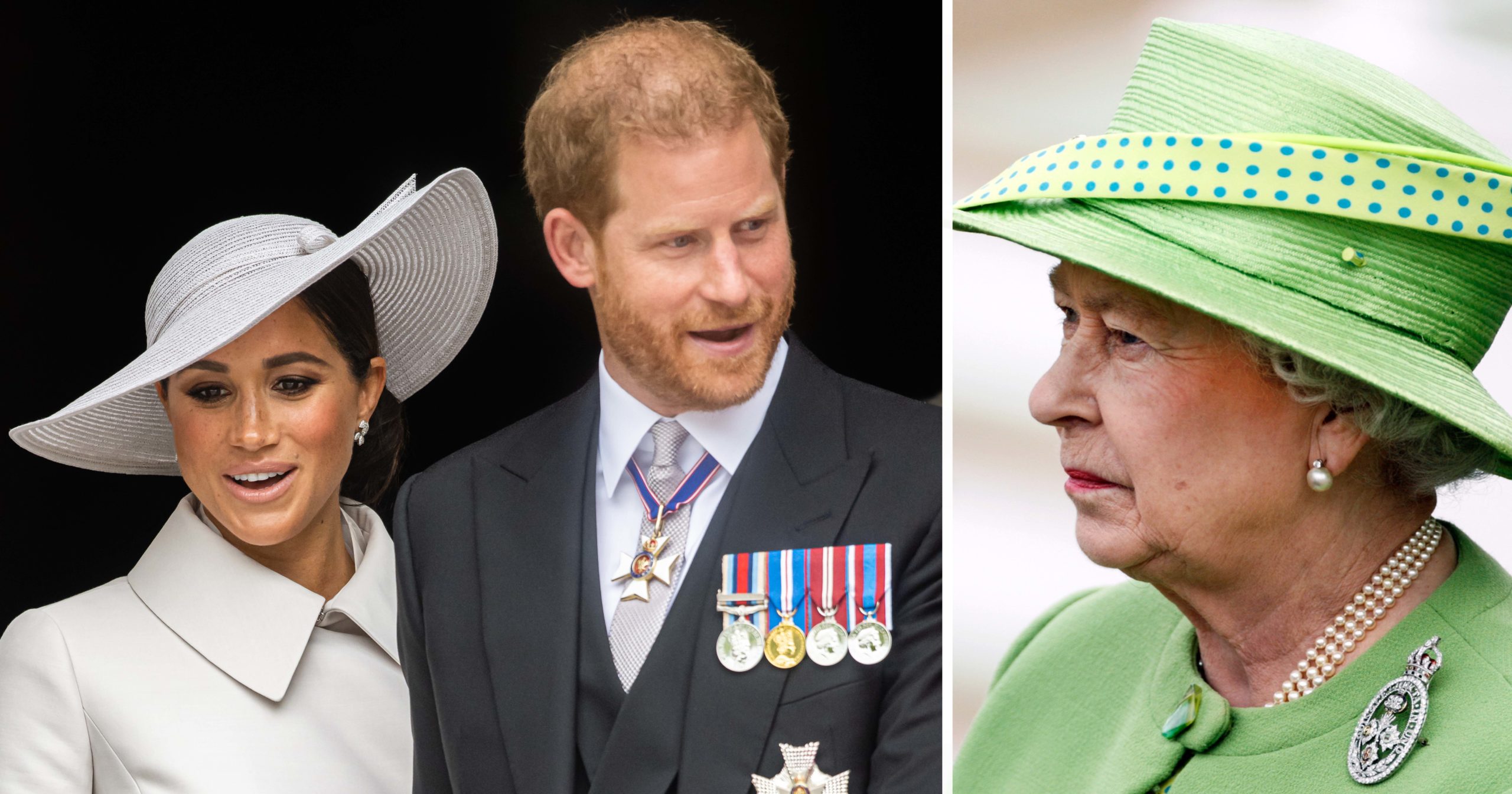 When Harry and Meghan Markle left the Royal Family in 2020, it wasn’t just about a desire to stop performing their official duties and engagements. No, the Sussexes displayed their intent to say goodbye to the Firm behind entirely when they chose to leave the UK.

Some thought it would be for good, especially since their relationship with the Royal Family had seen a sharp decline. This was only exacerbated after Harry and Meghan’s Oprah interview, and all the backlash that followed.

Harry’s father, King Charles, and brother, Prince William, were angry and disappointed to say the least. Another who also had trouble accepting the couple’s actions was the late-Queen Elizabeth.

¨According to a royal expert, Her Majesty tried her best to meet the Sussexes despite the fact they had relocated to the US. If reports are to be believed, though, she was let down in one very bitter way.

It’s been more than two years since Harry and Meghan decided to step back from the Royal Family. When they did so, they resigned from all official royal duties permanently and left the country.

“We intend to step back as ‘senior’ members of the Royal Family and work to become financially independent while continuing to fully support Her Majesty The Queen,” Harry and Meghan said.

“We now plan to balance our time between the United Kingdom and North America, continuing to honor our duty to The Queen, the Commonwealth, and our patronages.”

Initially, it seemed like the Queen, and the rest of the royals, had accepted their decision. After all, they are human beings free to do whatever they seem to fit.

However, it didn’t take long before things turned very ugly.

The Oprah interview turned everything on its head around regarding the Royal family, Harry, and Meghan. Firstly, the couple accused members of the Firm of questioning their son Archie’s potential skin color (before his birth). Meghan, meanwhile, lashed out during the interview, saying that she didn’t get any help from the Firm regarding her declining mental health.

Moreover, Harry spoke openly about his father, King Charles, and brother, Prince William, being “trapped” within the royal sphere. It reportedly left his family furious – and there were consequences.

Harry and Meghan were practically closed out from the royal family. The Queen, Charles, Camilla, William, and Kate not wanting anything to do with them.

Harry’s upcoming memoir has been a talking point for a long time. Several reports have revealed that his book – published by Penguin Random House – will create new tensions between Harry and Meghan and the rest of the Royal Family.

Harry’s tell-all book has been said to be an “accurate and wholly truthful” account of his life.

The ostracized Prince dropped the news that he was writing a new book four months after the Oprah interview aired.

Now, new details about Harry’s book have been disclosed, and the release date is set for January 10. It will be named Spare, with Harper’s Bazaar speculating that it might address Harry’s “spare” role as the second son of a King, or that perhaps that he is being “spared” from the Royal Family now that he has left.

No matter what, it’s generally rumored that the memoir will paint a negative picture of his family.

According to Page Six sources, the book will contain a number of truth bombs.

Despite making a lot of money from his previous work, Harry will make plenty of cash when the book is released. According to Page Six, he’s already received “at least $20 million upfront” from his publisher, Penguin Random House.

Yet painting a negative picture of his family could see he and Meghan banned from attending his father’s coronation. That, according to a friend of Camilla’s.

By all accounts, Charles has a profoundly loving relationship with Camilla, and his protective feelings toward her are strong.

Not long after the funeral of Queen Elizabeth, Harry and Meghan headed back home to their house in Montecito, California. Though tensions between the couple and the Royal Family have been high over the last few years, this time, there was a simple reason behind their swift departure.

Harry and Meghan’s two children, Archie, 3, and Lilibet, 1, stayed in the US while their parents were in Britain. It should go without saying that the couple greatly missed their kids.

Harry’s remarks about his family left many senior members of The Firm angry, especially his father and brother, Prince William. Harry even revealed that Charles stopped taking his calls following his move to the US.

Still, when Prince Philip was to be buried, Harry attended the funeral – the first time he’d seen his family since the interview.

Even though there have been tensions between the Sussexes and the royal family, not everyone wanted it to end the way it did. Queen Elizabeth really wanted to keep them connected with the Firm, according to author Katie Nicholl, who claimed that she often enjoyed video calls with Harry and Meghan and her great-grandchildren Archie and Lilibet.

Yet despite Her Majesty’s kindness, Harry and Meghan managed to reportedly disappoint the Queen, who was “hurt” by the couple several times.

“It’s important to stress that there were times when she [Queen Elizabeth] felt quite let down by Harry and Megan and quite disappointed by them,” Nichol, the author of the new book The New Royals, said on the To Di For Daily podcast.

“She would always host this lovely weekend at the end of August, a big sleepover for her grandchildren and great-grandchildren. And she would always make a point of inviting Harry and Megan, but in the last couple of summers, they didn’t go.”

Harry and Meghan lived in the UK after their marriage in 2018. However, towards the end of their time as active royals, they slowly started to distance themselves from the rest of the family.

In 2018, they celebrated the last Christmas in the UK. In 2019, they decided to spend the holidays with Meghan’s mother, Doria Ragland, in Canada.

Just weeks later, they announced their decision to leave the Firm – and left the UK.

However, that didn’t mean that the royals were ready to permanently wash their hands of Harry and Meghan. The Sussexes were reportedly invited to spend the summer at Balmoral Castle but declined the invitation.

According to Katie Nichol, Queen Elizabeth invited them, but they declined.

“There were raised eyebrows when Harry and Meghan declined an invite from the Queen to spend a long weekend at Balmoral in the summer of 2019 — when she traditionally hosts a weekend for her grandchildren and a special sleepover for her great-grandchildren — preferring instead to take Archie to Ibiza and the south of France,” Katie Nichol wrote in her book, as reported by the Express.

“Playing happy families at Balmoral didn’t really fit their narrative,’ I was told by a source close to the Sussexes.”

In any case, Harry and Meghan’s lives in the US continue, and the couple are working hard with their respective careers. Meghan’s podcast peaked at No.1 on the Spotify podcast chart back in August, and both she and Harry surely have other big projects planned for the future.

Interestingly, during the aforementioned Oprah interview, Meghan spoke highly of the Queen and how she had treated her during their first engagement together.

“The Queen, for example, has always been wonderful to me. I mean, we had one of our first joint engagements together,” Meghan said.

Recently, Meghan did an interview with Variety. She explained there that she and Harry were grateful to have been at Her Majesty’s funeral to support her husband.

“What’s so beautiful is to look at the legacy that his grandmother was able to leave on so many fronts. Certainly, in terms of female leadership, she is the most shining example of what that looks like. I feel deep gratitude to have been able to spend time with her and get to know her. It’s been a complicated time, but my husband, ever the optimist, said, ‘Now she’s reunited with her husband,'” Meghan shared.

“In big moments in life, you get a lot of perspective. It makes you wonder what you want to focus your energy on. Right now, we feel energized and excited about all of the things we’ve been building toward. We’re also focused on our foundation,” she added. “So much of the work we do includes the philanthropic space.”