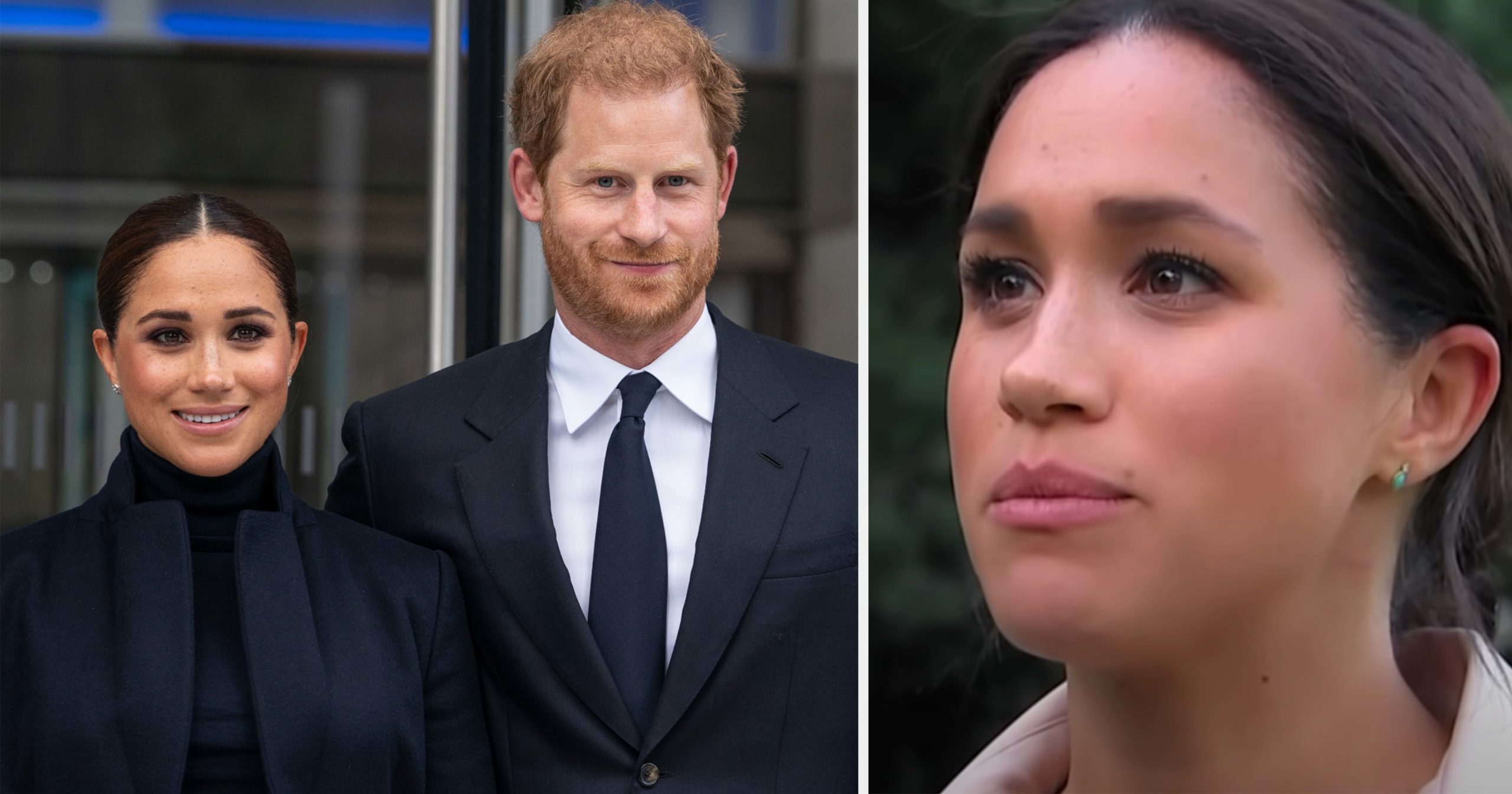 Meghan Markle and Prince Harry are busy investing in their new careers. In particular, Meghan’s podcast, Archetypes, is performing well, and with every new episode that is released, listeners are getting more and more glimpses into her and Harry’s life.

The Sussexes have two young children, and that, in itself, is not always that easy to handle. In her last podcast episode, Meghan confessed that becoming a mother to a girl – not a boy – changed her life completely.

Meghan Markle has been in the spotlight of the British media ever since she and Harry met, started dating, married, and later left the Royal Family. The infamous Oprah Winfrey interview had people both loving and despising her in equal measure, depending on whose side they decided to take.

Through her latest project, podcast Archetypes, the former actress has grown herself an extensive fan base – the podcast has thus far been a huge success story.

Of late, however, arguably the biggest talking point regarding the Sussexes hasn’t centered around Meghan Markle. Instead, it’s been about Harry, with details of his new, tell-all memoir being revealed.

Harry’s upcoming book has been a talking point for a long time. Several reports have revealed that his book – published by Penguin Random House – is bound to create new tension between himself and the rest of the Royal Family.

The release date for Harry’s book, named Spare, is set for January 10. Harper’s Bazaar speculates that it might address Harry’s “spare” role as the second son of a King or that perhaps he is being “spared” from the Royal Family now that he has left.

No matter what, it’s generally rumored that the memoir will paint a negative picture of Harry’s family. According to Page Six sources, the book will contain several truth bombs.

May 6 will mark the 4th birthday of Harry and Meghan’s son, Archie. How the couple reacted to the fact that King Charles’s coronation will be on the same date has not yet been revealed. Neither has it been confirmed whether Harry and Meghan will even be invited.

Should the new memoir would reveal new juicy and negative details about King Charles, Camilla, or any royal family members. In that case, the Sussexes might see themselves being banned from even attending the coronation of his Majesty.

Though the book is not yet out for a couple of months, Harry’s relationship with William and some of his family members is – as we all know – strained to say the least.

According to The Sun, William and Harry have barely spoken at all since the Sussex Prince released the news of his book. Other members of the Firm are also reportedly said to be waiting on “tenterhooks” to read the memoir.

“Harry has thrown a spanner in the works as he is desperate to get [the memoir] refined in the light of the Queen’s death, her funeral, and his father Charles taking the throne,” a source said.

“There may be things which might not look so good if they come out so soon after the Queen’s death and his dad becoming King.”

The source added: “He wants sections changed. It’s not a total rewrite by any means. He desperately wants to make changes. But it might be too late.”

As stands, Harry’s memoir is reportedly finished. In the process of writing it, he reportedly spoke to many of old friends back in England, asking if they could help him.

But it wasn’t not only friends Harry reached out to. According to the Sun, Harry, somewhat sensationally, even got in touch with some of his ex-girlfriends during the summer.

Harry’s book won’t only impact on his personal relationship with the Royal Family, but also Meghan’s. The couple have shared their feelings about leaving the royal fold, as well as their experiences within it. When the memoir drops, it seems like there will be no turning back.

The couple spent their last Christmas with the British side of their family in 2018. Since then, they have only been back to the UK as a couple once; for the Queen’s funeral.

Royal insiders said there was hope that the subsequent reunion would be a “thawing of relations” between Harry & Meghan and the Firm, but tensions were said to have been high during the funeral week.

The Duchess and Kate did not extract one single word, insiders claimed. And now, new reports suggest that Meghan and Harry have no plans on returning for the next big holiday.

As reported by The Mirror, King Charles had invited them to spend Christmas with the family at Sandringham Estate in Norfolk. However, Meghan Markle and Harry reportedly turned down the invite, as their relationship has hit “rock bottom.”

“Any retaliation won’t be pretty”

“This book could spell the end for any relationship Harry wants to have with his family, it’s desperately sad. Everyone is bracing themselves for yet another fraught and frantic period at the mercy of the Sussexes,” one insider claimed.

Moreover, King Charles is said to be ready to strip Meghan and Harry of all their titles if the book is indeed packed with disparaging revelations.

According to royal author Tom Bower, Harry’s book is “make or break” for the Firm.

“I imagine that King Charles has been warned that any retaliation won’t be pretty,” he said. “All that King Charles can really do is to withhold the titles for his grandchildren Archie and Lilibet. Ultimately, I suppose, he could take away Harry and Meghan’s titles as well, but that’s pretty drastic.”

Despite the ongoing rift with the royals, life is continuing as usual for Harry and Meghan. They live in their multimillion-dollar mansion in Montecito, California, about two hours outside of Los Angeles, which has been described as “Fort Knox.”

The couple are busy raising their two children, son Archie and daughter Lilibet. While Harry and Meghan have said that it has been fantastic seeing their children grow and learn new things, it has also been a demanding time.

Meghan Markle reveals details of morning routine with her children

In the latest episode of her podcast Archetypes, titled “Good Wife/Bad Wife, Good Mom/Bad Mom”, Meghan spoke with her guests’ actress Pamela Adlon, First Lady of Canada, Grégoire Trudeau, and comedian Sam Jay. In conversation with Adlon, the Duchess discussed the feeling of being a woman, as well as a parent, in the modern era.

“Part of the labels that we’re talking about… This idea of what it means to be a good mom, or like a Stepford Wife – all of these different archetypes where you feel this pressure to have to be a more or a wife or a partner in a certain way … and then the mom shaming that comes with it, often times… and I think it’s so interesting to hear your journey of that,” Meghan said.

Meghan described how she tries to “juggle” between her two young children in the morning, saying that Harry helps her to get the day started.

“You know, both monitors on for the kids to hear them, always up with Lili, get her downstairs, then a half hour later Archie’s up,” Markle explained. “Start doing his lunch box before he’s up while I have her, getting her a little nibble. My husband’s helping me get him downstairs. I make breakfast for all three of them. It’s very important to me. I love doing it,” she said.

Meghan and Harry welcomed their firstborn child, Archie, on May 6, 2019. Then on June 4, last year, Lilibet was born.

Later in the podcast episode, Meghan described how her life changed forever with Lilibet’s birth. She said she would teach her daughter to be a “full-fledged interesting, curious, kind, strong, all the things, human being.” And also that she wants Lilibet to be a woman “with a voice.”

Meghan famously started her life in show business as a briefcase girl on the television show Deal or No Deal.

After landing more minor roles in films such as Get Him to the Greek and Remember Me, as well as the television series General Hospital, everything changed in 2011 when she landed the part of paralegal Rachel Zane on USA’s monster hit Suits.

Meghan became a star almost overnight. When she and Harry got married, the former actress ended her tenure on the show.

Lilibet and Archie as actors?

Over the years we’ve seen countless children of actors and actresses going on to work in show business themselves. But what if Archie or Lilibet want to work in front of the camera? For her part, Meghan thinks it would be “great.”

“When you become a parent, you genuinely want your kids to find the things that bring them complete joy. They’re our kids, obviously, and they’re part of a legacy and a tradition and a family that will have other expectations,” she told Variety.

At the same time, however, Meghan is aware that there would be certain criticisms towards her if she helped her children get into show business.

“There are so many people that will talk about what opened the door for my children. But it still takes talent and a lot of grit,” she added.