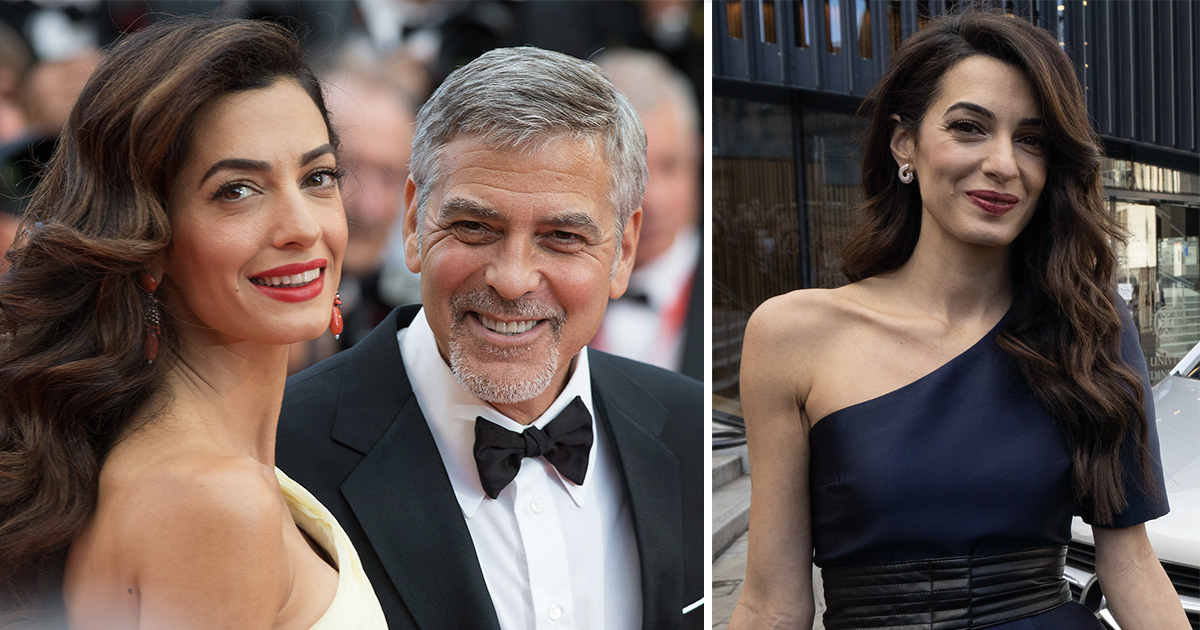 George and Amal Clooney have been married since 2013. But who is his stunning wife, and what has her own career been like?

This is the story of Amal Clooney, one of the world’s most respected human rights lawyers.

Few people don’t know who George Clooney is. The 59-year-old Kentucky native has been in show business since his teenage years, and has had a fantastic career both on and behind the screen as an actor, producer, writer and director.

It’s tough to choose Clooney’s best work. As easily as 1978, at the age of 17, he had his first role in the TV mini-series Centennial, starring alongside actors such as Richard Chamberlain and Barbara Carrera.

Over the years, Clooney has reached the top of the Hollywood celebrity ladder, winning many awards and starring in huge movies. However, sometimes we forget that he was actually a huge TV star to begin with. He appeared as Booker Brooks in Roseanne, and later, he became a star on ER.

In 1994, Clooney got the part as paediatric doctor Doug Ross. He was on the show from its pilot until 2009, appearing in a total of 101 episodes.

His work on ER was a huge turning point for Clooney. Living in New York at the time, he suddenly realized he was becoming a real celebrity.

“I was walking through the streets of New York half way through the first season of ER, and I’d been on a lot of TV shows so people would kind of recognize me, ‘It’s that guy from that thing,'” Clooney recalled.

“And I remember walking down the streets in Manhattan and them going, ‘Hey George,’ and they knew your name as opposed to your character. I remember that was a moment where I thought, ‘Things have changed.'”

Clooney was nominated for three executive Golden Globes in the Best Performance by an Actor in a Television Series – Drama category, as well as two Emmys in the Outstanding Lead Actor in a Drama Series category for his performances as Doug in ER. The nominations would be his first big ones – safe to say he had a successful TV show career.

But it was through working in film that he became a real star – and where he would land the awards and recognition he truly deserved.

That said, the biggest award anyone can find in life is love, and in 2002, George Clooney found it in the most unexpected way when he met his future wife Amal in Italy.

This is their love story.

In 2002, George Clooney bought the 18th century Villa Oleandra in Laglio on the western shore of Lake Como, Italy. It’s located in a small, quiet village where he loves spending his vacations, sometimes in the company of other friends and Hollywood celebrities.

In 2013 however, he would meet someone very special at the house when he fell in love with his future wife.

George Clooney’s friend made a stop while on the way to Cannes, France, and the friend happened to be travelling with Amal. Clooney had his family visiting the Lake Como house at the time, which meant Amal actually met her future husband’s nearest and dearest on the first day they saw each other.

“I got a call from my agent who said, ‘I met this woman who is coming to your house, who you’re going to marry,'” he recalled. “It really worked out that way.”

George Clooney and Amal spoke and wrote each other for several weeks as their romance flourished. They were emailing, writing each other letters and talking about what was going on in their lives. Over time, it evolved into something more than just being friends.

In October, George Clooney was at the famous Abbey Road Studios in London, working on his 2014 film, “The Monuments Men“. Amal lived in London at the time, and he asked her to come visit him at the studio.

That turned out to be their first date, which according to Clooney “was a really good one”.

Once they passed the first date mark, things rapidly turned into a relationship.

“She’d had a conversation with her parents who were like ‘What are George’s intentions?’, he says. “And she was saying, ‘Take it easy. We’ve been going out for six months’.”

However, George was planning something big. In April of 2004, following six months of dating, he proposed to her at his home. He hid a 7-carat engagement ring inside of a lighter box which Amal often used to light candles on the table.

It was a beautiful moment, accompanied with a special playlist of music.

“I did all the stuff, got down on my knee and did all the things you’re supposed to do,” Clooney told The Hollywood Reporter.

“I was waiting for this song, Why Shouldn’t I?’ ‘Why shouldn’t I take a chance when romance passes by? / Why shouldn’t I know of love?’ It’s a really good song about why can’t I be in love? And it played, and she’s like, ‘Holy shit!’ And she just kept staring at the ring, going, ‘Oh, my God.’ It was 20 minutes of me on my knee, waiting for her to say yes, because she was so shocked.”

In September of 2014, the couple got married in a private ceremony at the Aman Canal Grande Hotel in Venice. The couple and guests – including Matt Damon, Cindy Crawford, Emily Blunt and John Krasinski – arrived to the hotel by boat.

As it would happen, thanks to George being a huge Hollywood star, everyone knew about it.

“We didn’t tell anybody else that we were going to do it,” Clooney said. “But eventually somebody figured it out. Oh, my God! Once people got wind of it, it became an event.”

In June of 2017, Amal and George became parents, welcoming their beautiful twins, Ella and Alexander.

This was momentous, chiefly because they never had any plans of becoming parents at first.

“It had never been part of my DNA,” George Clooney said. “We didn’t plan on it. We never talked about it until after we were married, which is funny. There was an assumption that we didn’t want them. And then, after the wedding, we just felt we’d gotten very lucky, both of us, and we should share whatever good luck we’ve got. It would seem self-centered to just have that belong to us.”

Amal and George Clooney are now living happily with their two children. But who is Amal? And what does she do for work?

Since the wedding with George Clooney, Amal Clooney has become one of the most watched women on the planet, oftentimes praised for both her work and fashion sense.

But the truth is she was famous in her own right before meeting George Clooney, though not in show business.

Amal, born Amal Alamuddin, was born in Beirut, Lebanon in 1978. Her father, Ramzi Alamuddin, was the vice president of the Universal Federation of Travel Agents’ Association, which consults with the United Nations. As a result of that, their family was often on the move.

By the time Amal was due to be born, her family had moved back to Lebanon, but it wasn’t a joyride. Her mother, Baria Alamuddin, had suffered placenta previa, and was forced to spent two months in the hospital.

“My pregnancy with Amal was a rather difficult one,” Baria Alamuddin told Vogue. “At some point I was told that I should lose the baby. I said no. I kept on having these dreams in which I would see her face and how she was going to look.”

Amal was born without any complications. Clearly, she was a child of the future. Her father gave her the name Amal – Arabic for “hope” – and due to a raging civil war in Lebanon, the family decided to move to England

Amal Clooney was a great student, studying at Oxford University, where she developed a great interest in human rights. She went on to earn her Bachelors Degree in 2000. She later studied at NYU and soon, she had her Master’s Degree as well. In 2002, she passed the New York State Bar and started working at the top-ranked law firm Sullivan & Cromwell.

Following several years of work at the law firm, she turned her interest into international law, and began working with the United Nations on a huge case to prosecute the people responsible for the assassination of former Lebanese prime minister Rafic Hariri.

Amal would later return to England, spending more and more time working with international human rights law. She built a notable career in the field, working for the firm Doughty Street Chambers.

George and Amal definitely make a beautiful couple. People mostly see them dressed up at big events, but Amal looks truly amazing without any of the expensive dresses and perfect makeup. She is a true beauty!

On top of that, her fight for justice hasn’t gone unnoticed. Today, Amal Clooney is one of the most celebrated and famous international human rights law barristers in the world.

“She’s been a leading intellectual thinker on the concept of fairness—in a trial where you don’t have a jury and where, sometimes, you don’t have a defendant,” Geoffrey Robertson, a cofounder of Doughty Street Chambers says. “That set her apart even before she met George,”

In 2015, Amal started lecturing at Columbia Law School as a senior fellow with the Law School’s Human Rights Institute.

Together, Amal and George Clooney have won many awards, and rightfully so.

George Clooney is both a Golden Globe and Academy Award winning actor. He won the Academy Award for Best Supporting Actor in Syriana in 2006, and for Best Picture in 2013 for Argo, for which the Hollywood star was the producer.

In addition, Clooney’s won four Golden Globes and also received the Cecil B. DeMille Award in 2015, for “outstanding contributions to the world of entertainment”.

The award’s shelf back at Clooney’s house isn’t all George however. Amal Clooney won the Gwen Ifill Press Freedom Award for her “extraordinary and sustained achievement in the cause of press freedom” in 2020. It will be presented to her in November and presented by legendary actress Meryl Streep.

“In times of unprecedented uncertainty, it’s journalists who are out there, gathering the facts and trying to help us make sense of it all,” Streep said. “By asking tough questions, and pursuing the truth at any cost, they are essential workers — serving the public and protecting democracy.”

Last year, Amal also got a taste of the royal tier of the world. Following the Clooneys dining with Prince Charles, as a part of the celebration of The Prince’s Trust at the Buckingham Palace, he introduced the brand new Amal Clooney Award.

According to Business Insider, the award will be given to inspirational young women between 11 and 30 around the world, specifically honoring those who’ve made a difference in their community or are the driving force behind important projects; for example in rebuilding work in war zones and sustainable farming projects.

Amal Clooney and George Clooney are two incredible successful people. But the most important part is that they seem to love each other from the bottom of their hearts, and have a wonderful family as a result.