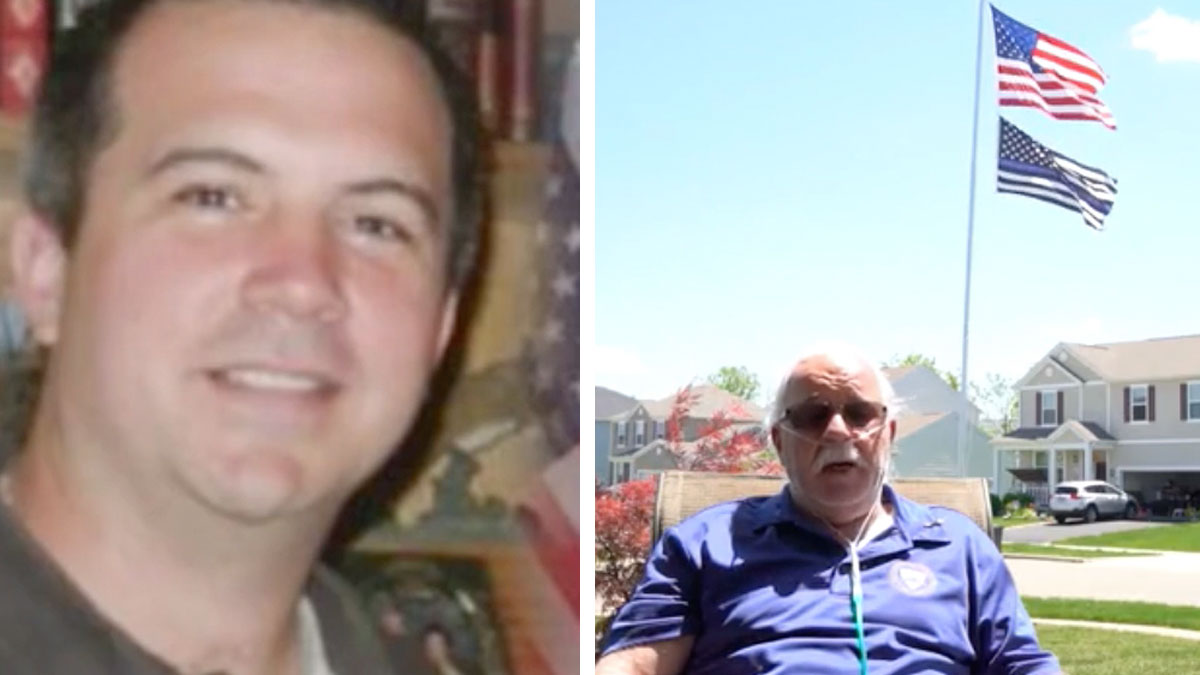 The father of a fallen police officer is upset after his neighborhood’s homeowner’s association told him he needed to take down a flag he’s been flying on his property since May 2017.

The “Thin Blue Line” flag serves as a memorial for his son who was killed while responding to a shooting at an Ohio nursing home.

‘It represents my son and nothing else.’

For the past five years, Thomas DiSario has honored his son, Steven Eric DiSario, by flying a version of the American flag outside of his home in Etna, Ohio.

The original flag, which was a gift from Steven’s colleagues, and has been replaced over the years.

The flag had not been on display over the past few months as the flagpole was in need of repair. It was only recently that Thomas was able to replace the flagpole and the flag.

But not long after his tribute to his son was back on display, Thomas had to deal with someone who did not want to see his Thin Blue Line flag flying high.

“I had a gentleman come in my yard, lower the flags, and [he] wiped his face on them,” he said.

Thomas, a disabled veteran who relies on oxygen, was aghast and asked the person to leave his property. The person refused to leave.

“I put him out of my yard,” but the person returned and took down both Thomas’ American flag and his Thin Blue Line flag.

Thomas contacted the local sheriff’s office, but authorities were unable to locate the suspect.

A few days later Thomas found himself with another problem, his neighborhood’s HOA informed him the Thin Blue Line flag was considered a political sign and must be removed.

The idea of a “thin blue line” can be traced back to 1854 when it was used in reference to a British battle formation. Similar phrases referred to other professions, but by 1922, the thin blue line started to become synonymous with police.

Over the years the thin blue line symbol has become associated with the Blue Lives Matter movement and white nationalists. While there are many supporters of the flag, it is seen as controversial.

Thomas disagreed with the HOA’s letter and said there is nothing political about his flag.

“I spent 23 years in the military, and there’s no way shape or form that flag is being flown disrespectful at all,” he said.

But David Dye, president of the Omni Community Association Managers, said when Thomas purchased a home in the community he agreed to certain rules and one of those rules includes things that can and cannot be displayed.

“Sometimes signs masquerade as flags or as light displays, as examples,” Dye said. “The board has adopted this and, as a sign, we don’t get to judge what it says.”

He also mentioned the HOA previously had to ask someone to remove a sign advertising a nativity display.

The person who removed Thomas’ flags days earlier is not associated with the HOA.

“It represents my son and nothing else. So I don’t know why everybody is now harassing me that I have to take it down.”

What are your thoughts about Thomas DiSario’s flag for his son. Should he be allowed to keep it or should he be forced to remove it?

Let us know in the comments on Facebook, and then share this article to keep the conversation going.