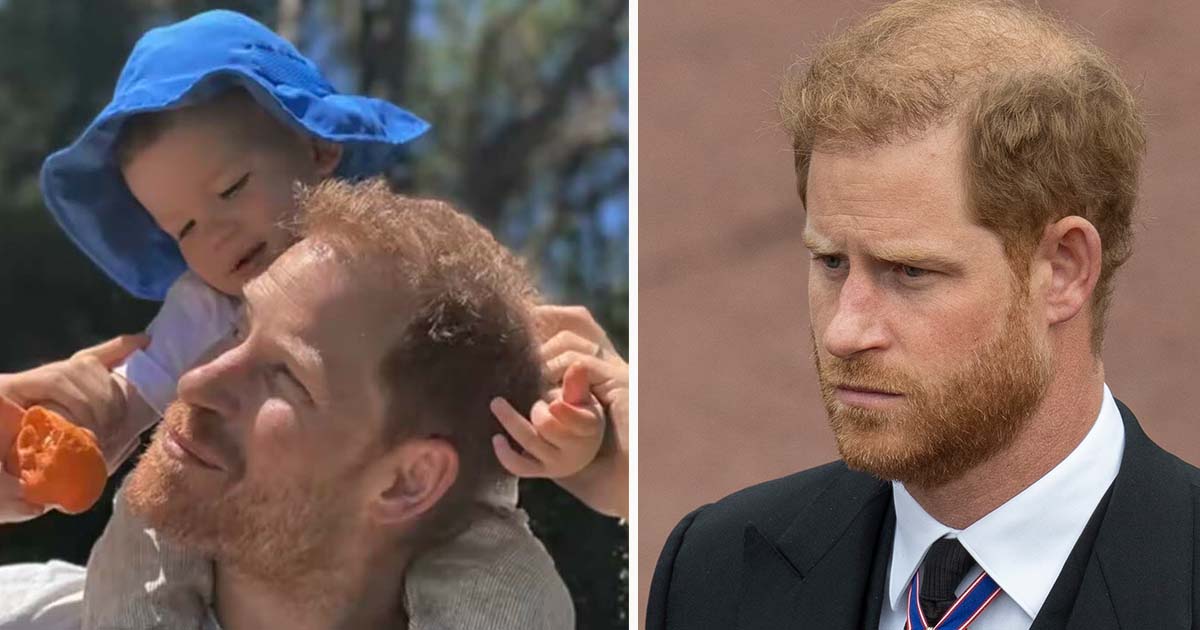 Prince Harry has commanded the attention of the world with the release of his tell-all book Spare.

Not only did he reveal details of his life as a working royal, but also gave fans insights into what he claims went on with some of his closest family members. He also talked at length about his upbringing – including the loss of his mother, Princess Diana – and discussed in detail his time serving in the army.

Harry also shared new details about the family he has created with Meghan Markle, offering new information on his firstborn child, Archie.

Although Harry and Meghan undoubtedly enjoy the spotlight, they have thus far ensured that their children are afforded a more sheltered time of things as they grow up. As a result, not much has been seen of Archie and his sister, Lilibet.

Yet during the Sussexes’ Netflix documentary, which aired in December, Harry and Meghan opened up and shared many private moments with their children.

In Spare, Harry shared more information about his private life. Interestingly, that includes what he did while Meghan was in labor with Archie … apparently, he got high!

Since Harry and Meghan began dating, the couple have been something of a fixation for the British tabloid press. That in itself is hardly surprising – it seems like half the world wants to know what they’re doing.

Harry was “obsessed” with sheltering Archie from journalists

Since Meghan Markle was already an established name – thanks to her role in the television series Suit – it caused quite the stir when it became apparent that she would be joining the British Royal Family.

On May 6, 2019, Harry and Meghan’s son Archie was born at The Portland Hospital in London. As with the birth of any royal child, it was a huge occasion – but Harry and Meghan decided to approach things a bit differently.

According to royal expert Katie Nicholl, Harry was reportedly obsessed with not giving the media any details of his son’s birth. In her book The New Royals: Queen Elizabeth’s Legacy and the Future of the Crown, Nicholl described Harry as being “almost morbidly obsessed” with keeping Archie’s birth as secret as possible.

However, with millions of loyal fans and the majority of the public sought information about the little boy, the longing for secrecy was ignored as it was a beach of the “unwritten contract between the royals and the public.”

“Behind the scenes, matters were so fraught that more than one official — as I know from personal experience — was reduced to tears of frustration and despair,” Rebecca English, royal editor of the Daily Mail, added.

Usually, when a royal baby is born, the parents and in front of the media on the steps to the hospital with their new son or daughter. After photographs are taken, the proud mother and father usually answer a few questions before retreating to privacy once more.

Harry and Meghan, however, wanted to approach their son’s birth differently, according to Katie Nicholl. Instead of facing the media openly, they tricked reporters and photographers.

“I had been really worried going into that labor”

Prince William, Harry, and William’s children were all born at St Mary’s Hospital, and thus that’s where the traditional first baby photos were taken. However, Meghan’s doctor worked at Portland Hospital. Therefore, it made sense to give birth there. Not only that, but the Sussexes were told the place would make photos impossible due to safety considerations around the entrance.

“Harry had always enjoyed outfoxing the media,” Nicholl wrote in The New Royals: Queen Elizabeth’s Legacy and the Future of the Crown.

“He and Meghan were thrilled to be safely delivered of their son in London’s private Portland hospital even before the palace press office had confirmed the duchess was in labor.”

In their Netflix documentary series, Meghan explained how she was anxious about what might happen the day her baby boy was born.

“There was already the pressure of the picture on the steps. … But I had been really worried going into that labor because I’m older, I didn’t know if I’d have to have a c-section, and I had a very longstanding relationship with my doctor, and that’s who I trusted with my pregnancy,” she said.

Two days later, however, Harry and Meghan decided to participate in a brief photo session, where one reporter got to ask questions.

Though everything was in order, it turned out that their time at the hospital had been quite dramatic. At least for Harry, something he’s now revealed in his book, Spare.

Before Archie could even talk or walk, he was caught up in a considerable controversy within the Royal Family. It all started with the infamous Oprah Winfrey interview, where his mother, Meghan, spoke openly about her time and troubles where living in the UK was concerned.

She revealed many things about the Firm, including that then-Prince Charles refused to take Harry’s phone calls.

However, the most shocking part occurred when Meghan claimed conversations had taken place within the palace concerning how dark Archie’s skin would be before his birth.

She declined to name the person who commented, adding only: “I think that would be very damaging to them.”

By the time Harry and Meghan’s royal duties officially ended on March 31, 2020, they had already welcomed Archie. The family is now four after the arrival of their daughter, Lilibet, in 2021.

In the first episode of the Netflix documentary, Harry and Meghan gave an intimate look into the family life at their home in Montecito, California. Their home was previously described as “Fort Knox,” and security is understandably tight.

Never-before seen photos of Archie and Lilibet in Netflix series

Via the documentary, for the first time, Harry and Meghan let royal fans worldwide into their estate. There, viewers found Archie and Lilibet.

Harry and Meghan have been very restrictive about showing their children to the world. Archie and Lilibet have only appeared a few times in pictures, but the world has now for gotten a better look at them.

Though the documentary has more serious parts, three-year-old Archie lrgely stole the show, appearing several times. Not only that, but viewers heard him speak for the first time.

In one heartwarming scene filmed by Meghan, Prince Harry can be seen birdwatching with Archie from the patio of their Montecito mansion.

Meghan was also watching the hummingbirds near their house, and Harry, an avid bird watcher, told his son that he should be quiet and just listen to the sounds of nature.

“We won’t get a chance to be this close to hummingbirds ever again,” Harry told Archie.

Of course, with Archie being just three years old, he did the exact opposite. Just moments after being told to stay quiet by his father, he became rather loud.

“I’ve got a dirty foot mama because I was with you,” Archie said, and his parents started laughing.

“You’ve got a dirty foot, sweetheart,” Meghan replied. “Papa is a birdwatcher so this is a really big moment for him.”

Showed their son a picture of Diana

The documentary also included several intimate family pictures of Harry and Meghan with Archie. In one of the clips, Archie runs up a hill while Lilibet is pushed in a stroller by her father. Another of the royal couple’s photos shows Harry cuddling up with Archie – wearing a knitted hooded jumper with bear ears – beneath an umbrella.

More photos follow, including those showing Archie and Meghan feeding their chickens, and another from Archie’s birthday party, where Meghan’s mother, Doria Ragland, makes an appearance.

We all know that the late Princess Diana has been a significant figure for the Royal Family, but most of all for her sons, William and Harry. Harry has previously spoken about his mother, even comparing Meghan to her regarding the media following her around.

Diana also had a small part in the Netflix documentary, and not just through Harry’s recollections of her. In a heartbreaking scene, Meghan can be seen holding Archie in front of a picture of Diana while she explains who she is.

Other intimate pictures in the documentary revealed Archie resting on Meghan’s baby bump when she was pregnant with Lilibet. But the cutest picture of them all might be one where Archie is wearing a blue hat and blue Crocs, sitting on Harry’s shoulder in a sweet father-son moment.

Another short video of Archie was also included in the documentary. It shows a beautiful sunset from the Sussexes’ patio while Meghan asks Archie what he thinks.

Archie is speaking with an American accent

The fact that Archie is talking might not come as a surprise. However, many fans reacted to the manner of Archie’s speech. As he’s been living in the US for quite a while, the young boy has adopted an American accent – and fans couldn’t help but remark on it.

“Not Archie having the most adorable American accent,” one user wrote on Twitter.

“Prince Archie has an American accent? I didn’t have any expectations of what he’d sound like but it was not that,” a second person tweeted.

Previously, experts have spoken on the subject of Archie’s accent. However, the fact that he’s living in the US and interacting with other local children means he will sound American instead of British.

However, there are cases where children living in the US who have family in the UK can switch accents when they travel across the Atlantic.

One expert, Geoffrey Pullum, linguist and emeritus professor of general linguistics at the University of Edinburgh, argues that Archie’s accent will also change as he grows older.

“If Archie’s first experience of mixing with other kids is in a Los Angeles preschool, he will develop a Californian US accent,” Pullum said.

“He may learn to speak like an American kid in California, but be able to switch to a British accent when he visits in England,” Berko Gleason, an emerita professor at Boston University who researches language acquisition, added.

While Harry and Meghan have their hands full raising their children and orchestrating other career-driven projects, the start of their parenthood was quite dramatic, at least for Harry.

In his book, Spare, Harry criticized many family members and brought other aspects of his life to the spotlight, including, for example, the day his mother, Princess Diana, died in a tragic car crash.

That said, the Prince did also bring some more positive memories to life.

In Spare, Harry described the extraordinary scene at the Portland Hospital where he decided to get high on laughing gas to calm himself down.

“But I saw two ways of enhancing my calm. One: Nando’s chicken (brought by our bodyguards). Two: A canister of laughing gas beside Meg’s bed. I took several slow, penetrating hits,” Harry wrote in his tell-all book.

He added: “Meg, bouncing on a giant purple ball, a proven way of giving nature a push, laughed and rolled her eyes. I took several more hits, and now I was bouncing too.”

Harry then explained that a nurse tried giving his wife the gas for the pain, but he had already consumed it all.

“I could see the thought slowly dawning”

“I could see the thought slowly dawning. Gracious, the husband’s had it all. ‘Sorry,” I said meekly.'”

Eventually, doctors decided to give Meghan an epidural to ease the pain.

“The anesthetist hurried in. Off went the music, on went the lights. Whoa. Vibe change.”

Though there was an initial worry that Archie had been tangled up in his umbilical cord, he emerged unharmed – reducing both Harry and Meghan to tears.